Cincinnati-based Procter & Gamble has begun test-marketing Eagle-brand snack foods in stand-up pouches with zipper reclosures. The test, which began in August, is only in Portland, ME. 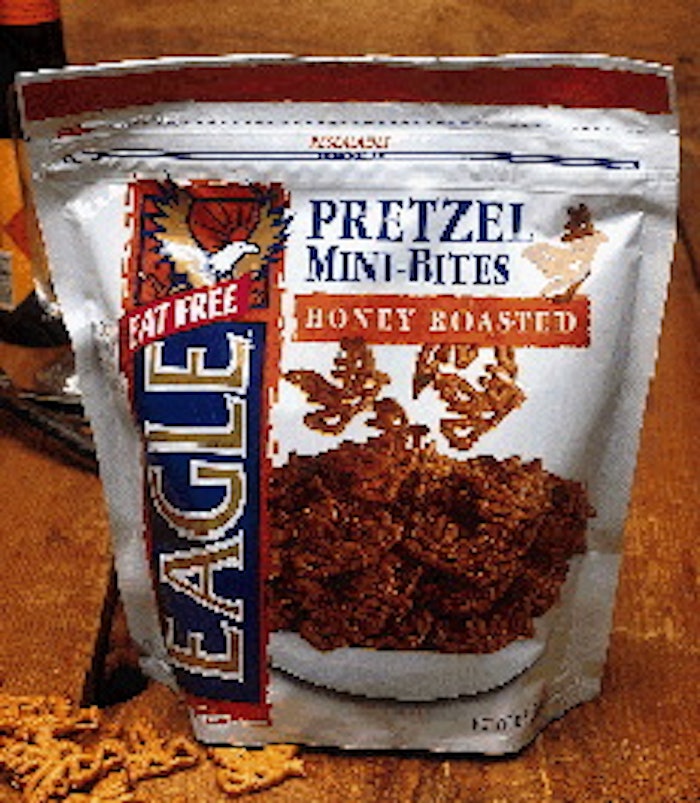 The pretzel and corn twist snacks are available for $1.99 each. Although the weights differ due to different product densities-10.5 oz for corn twists and 5.5 oz for pretzels-the bags are very similar in size.

While such pouches are no longer novel, most packagers have shied away from using them for mass-market, high-volume snacks such as pretzels because they're more expensive than traditional vertical form/fill/seal bags. Though P&G wouldn't comment on future plans, some experts believe the company hopes the resealable, stand-up pouch will help it win marketshare in a highly competitive segment. Salty snacks have long been dominated by Frito-Lay.

As usual, P&G won't identify machinery or materials used to make the pouch. However, side and top seals reveal that the package is formed from a metallized film lamination on a horizontal f/f/s machine. It is believed the pouch is made on a Laudenberg from Profile Packaging (Sarasota, FL), but that couldn't be confirmed at press time.

Although the packages are distributed for the Maine test via store-door delivery, P&G hasn't said whether such a distribution method will be used nationally. USA Today reported that P&G may deliver the product via the conventional warehouse distribution system, where it has more experience. But that exposes the products to more handling in a rougher distribution environment, risky for delicate snacks. Frito-Lay-as well as many regional snack companies-delivers direct to stores to minimize breakage.

P&G wouldn't comment on the delivery method or timing for the national rollout, according to spokesperson Lisa Hulse Jester. However, she did say initial results seem promising. "Our early [indication] from consumers has been very positive."