Immobilized plant cells: from DSMZ to the customer

VisiSens technology is used to detect metabolic activities of immobilized plant cells during simulated cell transport in a closed system. 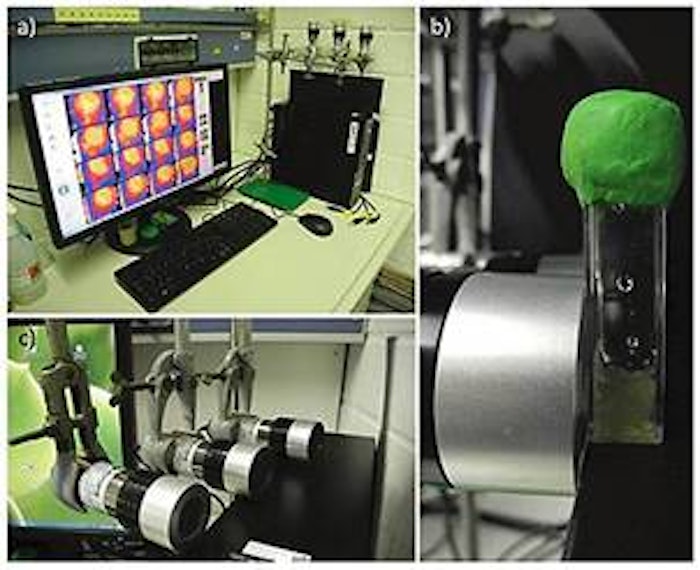 Braunschweig, Germany-based DSMZ serves as an international supplier for science, diagnostic laboratories, and national reference centers, as well as industrial partners. DSMZ sends cell cultures to clients either by post or by a private parcel service, to customers in Germany, and the rest of Europe, as well as to the U.S.

The use of plant cell lines for fundamental as well as applied research relies on stable material. For plant cell lines the reliable long-term preservation and distribution is an essential aspect. Research activities therefore aim not only to develop new and advanced methods for plant cell cryopreservation, but also improve transport to customers.

To address the issue, DSMZ selected the VisiSens™ CO2 imaging system from Precision Sensing GmbH to monitor metabolic activity and with it the fitness of living cells in airtight transport systems.

PreSens provides chemical optical O2, pH, and CO2 sensors—parameters that are essential for life. The company develops, manufactures, and distributes sensor systems for biotech and pharmaceutical and food and beverage industries, as well as for scientific applications and medical devices.

DSMZ’s aim is to send active cells under sterile conditions, which have been immobilized in alginate beads and afterwards cryopreserved. So far at DSMZ the cells are regrown on agar plates after thawing, which is time-consuming. These living cultures are distributed wrapped manually in air-bubble plastic and packed in a plastic jar with screw cap.

Dispatch of cryopreserved cells could be sent directly in the cryovials, provided they survive the transport. To be able to investigate this question using the VisiSens CO2 imaging system the transport situation was simulated transferring the immobilized cells into plastic cuvettes from Brand, airtight-closed by plasticine. They need to be sent to clients as soon as they have been regenerated after cryopreservation.

CO2 monitoring together with pH and O2 imaging in the sealed cuvettes have revealed that immobilized plant cells show metabolic activity even after 10 days of storage in the transport vessels.

In contrast to bacterial cells, plant cell lines are difficult to cryopreserve due to high water content and subcellular structure. A routine long-term preservation method is still missing, and regular routine culture transfer causes a constant workload. Continuous sub-culturing bears the risk of losing cultures by laboratory failure or by genetic/epigenetic changes.

One approach for cryopreservation uses the encapsulation of plant cells in alginate beads, which are then cryopreserved and stored in liquid nitrogen until they are requested by a customer. As plant cells often do not survive transport at -70°C and transport at liquid nitrogen temperatures is economically not feasible, reactivated cells have to be delivered in the living state.

Transport vials containing cells and medium have to be hermetically sealed to maintain sterility during transport. Plant cell lines are fed heterotrophically under culturing conditions, i.e., they are photosynthetically inactive and use sugar as a carbon source supplied with the culture medium.

As a consequence they produce carbon dioxide rather than consume it. The VisiSens CO2 imaging system was applied to visualize carbon dioxide changes in an airtight closed transport system (Fig. 1). The goal was to monitor metabolic activity indicating fitness of living cells by detecting the accumulation of the metabolic end product carbon dioxide. Monitoring of carbon dioxide was supplemented by recording pH and O2 in the same system.

To perform the investigations using the VisiSens CO2 imaging system immobilization of plant cells was necessary. Plant cells of actively growing liquid cultures of Solanum tuberosum Desirée and Nicotiana tabacum BY2 were used.They were washed twice with medium (without CaCl2), and 10 mL of each culture were poured in a Falcon tube (50 mL), which was filled up to 30 mL with 3% alginate solution. The combination of cells and alginate was gently mixed and then dripped into a 100mM CaCl2 solution using a pipette with a cut tip.

After stirring for 20 min the supernatant was discarded and alginate beads were washed twice with CaCl2-free solution. Freshly immobilized plant cells were transferred into plastic cuvettes equipped with pH, O2, and CO2 sensors (Fig. 2).

Four alginate beads per cuvette were doused with 1 mL of plant medium before cuvettes were airtight closed. As controls the respective plant media without cells as well as the sensor foil alone were measured. All samples were stored in the dark at room temperature and were retrieved only for monitoring. Immobilized cells were monitored for 10 days.

Changes of CO2, pH, and O2 in an airtight closed system containing immobilized plant cells of S. tuberosum and N. tabacum, respectively, were monitored for 10 days with VisiSens (Fig. 3). In Fig. 3a, changes of CO2 concentration in the liquid medium surrounding S. tuberosum beads are shown. Within 10 days of monitoring (consisting of 20 individual measurements) a strong increase of CO2 was recorded.

Consequently, the pH decreased and the medium was getting more acidic. Furthermore, what was observed was a distinct consumption of O2 over time (Fig. 3a). Figure 3b shows the changes of CO2, pH, and O2 in the same system using immobilized plant cells of N. tabacum.

A total of 14 measurements revealed an increase of CO2 in the liquid medium surrounding N. tabacum. As in vessels with S. tuberosum, the rising CO2 content caused the plant medium to become acidic. However, compared to S. tuberosum the O2 consumption and CO2 production of N. tabacum were weaker. Monitoring the fitness parameters of living cells in sealed transport vessels with imaging technology indicated metabolic activity of immobilized cells. After two weeks of monitoring plant cells started to grow out of the alginate beads in the airtight, closed vessel. This shows that cells were still alive and confirmed that the detected parameter changes were due to the metabolic activity of the cells.

pH changes in the transport vessel

During 10 days of monitoring in both approaches, i.e., immobilized cells of S. tuberosum and N. tabacum, the pH of the surrounding medium in the transport vessels ranged from about 6.5 to 4 (Fig. 4).

In the beginning an obvious pH difference between medium (around pH 5) and vessel atmosphere (pH 6 to 6.5) was detectable (Fig. 4c, h). After 10 days the pH of both phases had equalized to a value below 4.5 in both approaches (Fig. 4e, j). Controls (medium/sensors only) did not show any relevant changes.

Shipping of plant cell lines can take several days of transport depending on the destination. During transport, cells have to stay in a tightly sealed environment to maintain sterility. It is difficult to predict the time at which depletion of nutrients (sucrose, O2) or accumulation of end products (CO2) limits the survival of cells under these conditions. Using VisiSens DSMZ was able to observe the metabolic activity of immobilized plant cells in a hermetically sealed transport vessel for the first time, as the system allows noninvasive measurements.

DSMZ’s monitoring approaches revealed that immobilized plant cells show metabolic activity even after 10 days of storage in a closed system and the growth of plant cells confirmed VisiSens observations. As a transport usually takes less than 10 days, fitness of cells can be guaranteed.

• Alginate: A gelatinous polysaccharide extract from brown algae and salt of alginic acid, which is a linear polymer of mannuronic and glucuronic acids, found in the cell walls of algae. It is widely used in processed foods and in medicinal, industrial, and household products, including swabs, filters, and fire retardants.

• Cryopreserved: Cryopreservation or cryoconservation is a process where cells, whole tissues, or any other substances susceptible to damage caused by chemical reactivity or time are preserved by cooling to sub-zero temperatures.

• Cuvette: A cuvette (sample cell, absorption cell) is, in its basic level, fundamentally a test tube designed for use with optical analysis. Standard cuvettes are generally square or rectangular in cross section to avoid refraction artifacts. Depending on what part of the spectrum is under consideration, they may be made of quartz or optical glass although plastic cuvettes do exist for less demanding measurements.

• Epigenetics: Epigenetics is the study of changes in gene expression caused by certain base pairs in DNA or RNA being "turned off" or "turned on" again, through chemical reactions.

• Heterotrophically: An organism that cannot synthesize its own food and is dependent on complex organic substances for nutrition.

• Photosynthetically: The process in green plants and certain other organisms by which carbohydrates are synthesized from carbon dioxide and water using light as an energy source. Most forms of photosynthesis release oxygen as a byproduct.

Watch a video on PreSens here.