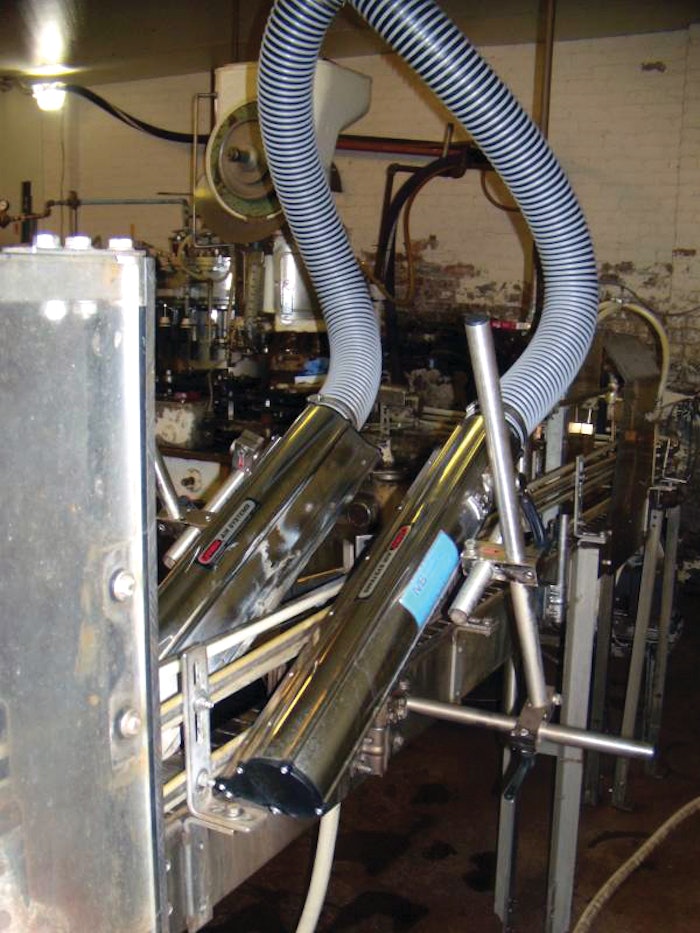 With high-velocity air being delivered by two aluminum air knives, labeling efficiency has been greatly improved.

For 25 years, Lakefront Brewery has been delivering some of Milwaukee’s finest brews, from its signature Riverwest Stein to the nation’s first organic beer. The business began as a friendly home-brewing rivalry between brothers Russ and Jim Klisch that turned commercial on December 2, 1987, and today occupies a 1908 heritage site on the Milwaukee River. Now that Lakefront produces more than 30 brews, expansion is in the air and with that, there is always some bottleneck. The most recent challenge involved wet bottles, expensive glue, and nonadhering labels; the solution, a high-velocity blower and air knife system from Sonic Air Systems, Inc. (www.sonicairsystems.com).

“We fill cold glass bottles, and the labeler is quite close to a bottle wash stand as well,” explains Lakefront’s plant manager, Andy Jones. “We have cold beer going into the bottle in a humid atmosphere with condensation and spray from wash water. These wet bottles then go straight to the labeler.” This setup resulted in issues with labels not adhering properly to the wet bottles.

Operating one bottling line at speeds of 120 to 130 bpm, Jones and his team first tried to solve the problem by procuring the best possible glue. “We probably used a more expensive glue than necessary to get the labels to stick,” he says. “We were going through a lot of it, and it was expensive. Those 55 gallon drums cost $700 to $1,000.”

Almost simultaneously, Neal Daley of Marchant Schmidt initiated a cold call to Lakefront, speaking directly with co-founder and president Russ Klitsch. “I’d asked to speak to someone who worked in maintenance, and Russ said he did,” says Daley. “Later in the call, I got his full title. It turned out I was talking to the president. Obviously at Lakefront Brewery, all egos are checked at the door.”

Daley then paid a visit to Lakefront and gave a presentation on the Sonic Air Systems high-velocity blower and air knife system designed for bottle blow-off of excess moisture. Recalls Jones, “It seemed that Sonic Air Systems was a pretty good industry standard, and Daley’s quote for the system was less than expected, pretty affordable. I heard that other brewers had success with this type of setup. I constantly have a laundry list for potential purchases we could make, and it got added to the priority list.”

That summer, some financing became available for what would turn out to be, according to Jones, “one of the most successful additions as far as ease of installation” Lakefront had ever made.

The brewery purchased a Model Sonic 70 blower with a 10Hp motor delivering high-velocity air into two Sonic 24–in. aluminum air knives, along with hoses and fittings. “Our installation is kind of custom, with the bottle line in its own room. The blower is mounted on the ceiling, and this keeps the sound levels lower for the operators. We had to move things out of the way on conveyors and get the brackets mounted. It took us less time to install the physical component than it did for our electrician to hook it up. It was less than two full days of work to get things up and running,” says Jones.

Daley arrived to help with the details of lining up the air knives. “We put them as close to the labeler as possible, so the bottles wouldn’t have a chance to get condensation,” he recalls.

Once the Sonic system was operational, Jones e-mailed Daley about the savings in glue: “We typically use two to three five-gallon buckets of label glue per week. Since starting up the knives, we have seen a 66-percent reduction in glue usage, and it is still holding true. We’re using about five gallons per week of glue versus 15 before the air knives. It costs about $70 per five gallons, so we’re looking at a savings of around $140 every week.”

More benefits have added up, including fewer hours spent cleaning the labeling system. According to Jones, “Because we were trying to get so much glue on the labels themselves, we ended up getting glue on components and operator fingers. Since the Sonic equipment installation, I’ve heard from our operators that things go faster, probably quicker start-up times since we are filling fewer five-gallon pails of glue from that 55-gallon drum. On top of that, with reduced clean up since the labeler has less mess on it, plus less time filling five-gallon buckets from our 55 gallon drum, I’d estimate labor savings around two man-hours per week, which we figure at about $20 per man-hour (wage plus benefits), so there’s another $40 per week in savings. Given these numbers, our ROI for the system cost plus installation should happen after about one year of operation.”

After the Sonic system was installed, Lakefront set up an ink-jet coding system to apply codes on bottles. “We were limited as to where we could put that on the line,” Jones explains. “The best spot as far as flow was immediately following the labeler, but with the bottles being so wet at that point, there was no way an ink-jet printer was going to work. We didn’t use it before the Sonic system was in place. The bottle can now take an ink-jet code after the labeler, because the air knives get the bottles dry enough on the shoulder.”

Have line speeds increased with the new system? “I would feel more comfortable running the line faster, but I’m limited by other components on the line,” says Jones. “We have a new filler coming in this winter that will allow us to go up to 200 bottles per minute.”