Toothpaste helps you maintain healthy, attractive, and clean teeth, but only in recent years have vision systems been used to check whether the actual product packaging is clean and safe before the toothpaste tubes are filled.

Previously, filling systems that were not equipped with a machine vision system could not completely guarantee that particles of dirt from the preliminary tube production stage would not be inside the tube after the filling and sealing process. Packaging machinery maker IWK Verpackungstechnik GmbH based in Stutensee, Germany relies on vision systems from Cognex in its newest packaging machine, the TFS 80-6, for 19mm to 40mm (0.75 to 1.57 inches) wide tubes.

During the course of the filling process, Cognex In-Sight® vision systems check that the tubes are round, clean, and firmly sealed. In-process inspection has allowed the number of cameras to be reduced from the six conventional units required in the old process to just two In-Sight systems per checking station.

The TFS 80-6 production line inspects, fills, and seals toothpaste tubes at a capacity of 500 tubes/min. Based on the needs of a typical toothpaste user, a minute's production time on the TFS 80-6 produces enough toothpaste for a lifetime of tooth brushing. Compared to conventional tube filling machines, which operate using a turntable, the TFS 80-6 has a conveyor circuit with a diagonal layout. With the process lines positioned at 90° angles to each other, the tubes are picked up horizontally, cleaned, filled, and sealed vertically, and then placed back down horizontally on a conveyor belt that takes them to a cartoning machine for final packaging.

The packaging materials have to be of high quality because the machine operates so quickly, but even then, there can still be contamination from small dirt particles, tubes may be deformed when the outer packaging is applied, or there may be faulty seals at the base of the tube. To ensure that their production processes are fault-free, IWK collaborated with Octum Electronic GmbH, a member of the Cognex specialist partner integrator network, to install two In-Sight 5100 and 5400 cameras on each of three inspection stations. Each camera monitors a set of parallel conveyer rows with offset tube holders.

During the first operation step, a 6-axis robot with an expanding gripper arm takes the tubes out of the boxes. The robot places them into the tube holders of the conveyor system with the open base of the tube pointing upwards. The robot arm is equipped with a special tool with pins, which fit precisely into the partition in the box, and picks up two rows with a total of 30 tubes each time. The screw cap is already in place at the top of the tube and the lower end is open for the filling procedure.

Two In-Sight 5100 cameras installed above the conveyor and the work areas evaluate the tube ground coat, the shoulders of the tube, and the inside of the tube cap during the particle check. The cameras detect foreign bodies based on the contrast to their surroundings. A red, ring-shaped LED light illuminates the inside of the tube from above. Any undesired particles cast a shadow that’s detected by the Cognex cameras, making it possible to detect objects that are the same color as the tube itself.

During the subsequent tube roundness check, two In-Sight 5100s check whether the tubes are of the required shape. If the tubes do not have the specified roundness, the nozzles stay at the edge during the cleaning and filling process and ram the packages into the tube holders. The technology ensures that the nozzles enter the tubes accurately to within a tolerance of three millimeters (0.12 in.). The checking procedure takes place without the need for an additional operation step during the process. The individual cameras receive a trigger for every tube and record pictures of the packages as they move past. If a tube is out-of-round or outside of the tolerance range, it is identified as faulty and is not filled. Further on in the process, the TFS 80-6 seals the tube and ejects it from the production line.

After cleaning and filling, the laminated plastic tubes are sealed with hot air. The ends of the tube are heated by hot air at a temperature of 380° to 450°C (716 to 842°F) and are then pressed together by cooled stamping jaws. The seal is either stamped smooth or in a corrugated pattern and may feature a serial number or code. Defects can occur at this stage of the packaging process. For example, if a knife becomes blunt and can no longer cut off the ends of the tubes correctly, the seal will be left with rough edges. In the trimming station, two In-Sight 5400 cameras ensure that all faulty packages are detected without fail. The cameras also check the seal itself. If the seal is not complete, or if the printing is not properly aligned with the specified parameters, the faulty tube is ejected from the process.

The In-Sight vision systems are networked to a central panel PC that records all of the images of faulty pieces. This makes it possible to detect faults quickly without having to recheck the actual item of packaging that has already been ejected from the process. The packaging process of IWK is reliable in terms of the quality standards achieved. 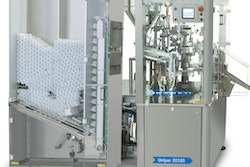 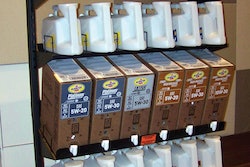