With an industrial PC operating as its main controller, this blister-pack machine recalculates cam tables with each cycle.

Controls technology from Beckhoff plays a key role in the operation of the HM200R blister pack machine introduced recently by Hoong-A Corp., represented in the United States by Key Intl.. The South Korean packaging machinery OEM took a single-source approach by relying on Beckhoff not only for the PC that is the “brains” of the machine but also for the automation software running on the PC, the Human Machine Interface (HMI )panel, the I/O components, and all five servo motor/drive pairs.

According to Hoong-A Manager of electronics Jeong-Ho Yeo, the use of a PC-based control platform—rather than a PLC for machine logic and a separate controller for motion—was driven partly by the desire to reduce the number of control elements in the overall system. Running on the C6140 industrial PC is Beckhoff’s TwinCAT automation software. A PCI Fieldbus Card FC7501 connects the PC to the servo motor drives and I/O Bus Coupler BK7500 along a SERCOS fiber-optic interface.

A key benefit to the PC-based control platform is that it simplifies and quickens the exchange of data. A good example of this benefit in action can be seen in how quickly electronic cam tables can be changed. Electronic cam tables are the modern-day equivalent of mechanical camming relationships. It’s a way of electronically defining any number of actuator positions relative to the position of a master axis.

In the Hoong-A machine, five axes of motion are pegged to a master axis that exists in the TwinCAT software. So if an operator at the HMI screen directs the system to produce blisters that are 80 mm long, all axes of motion are electronically synchronized to that measure. Forming, filling, sealing, die cutting, and discharge will occur at the precise time and velocity to produce 80-mm blister packs.

But it’s not that simple. Thermoformed blister packs are rarely the precise size they’re supposed to be because the vinyl forming web stretches unpredictably when exposed to heat. The variations are minute, but they’re real, and if unchecked they can cause misalignment of materials and bad packages.

To compensate for these material inconsistencies, laser sensors detect the position of the blister packs formed in each cycle. This position data is instantaneously relayed over the SERCOS interface to the PC so that the TwinCAT software can recalculate new cam tables for all axes of motion that are affected. This speedy bit of recalculation occurs with each cycle of the high-speed machine. Having automation software make such real-time adjustments in this fashion puts the HM200R at the top of its class, say Hoong-A engineers, and it’s one more reason they opted for a PC-based controls platform. 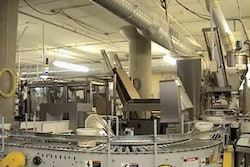 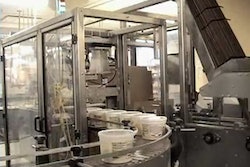 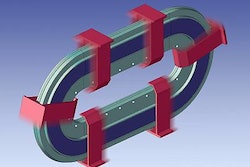