Wrapper does 'ryt' by contract packager 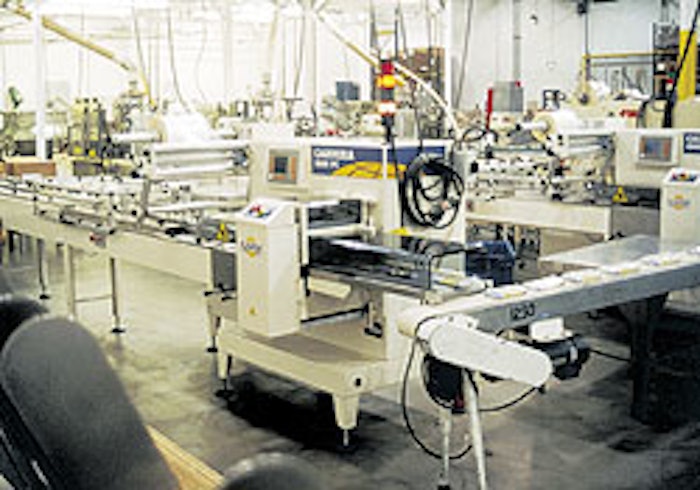 Until early this year, contract packager Ryt-way Industries had to employ workers to prevent jams on each of four fin-seal wrappers dedicated to packaging the firm’s microwave popcorn. That’s because there was no mechanical way to regulate how the pouches of popcorn were arranged on the lugged infeed conveyors of the wrappers.

“We could wind up with two pouches together on the infeed, and two pouches won’t go in one wrap. That jammed the machine,” says Mike Bethel, engineering packaging manager with Minneapolis-based Ryt-way. “Or, if we were missing a pouch and produced an empty bag, there again, that gummed up the machine if it happened too much.”

Thanks to two new Carrera 1000 fin-seal wrappers from Ilapak (Newtown, PA), Ryt-way was able to free up six employees to work on other lines, resulting in a 17% labor reduction on each of the two lines equipped with the wrappers, Bethel says.

The Ilapak wrappers include what Bethel calls a “smart-belt” infeed conveyor. A series of photoeyes positioned above the belt detect how full it is and if there are any gaps between popcorn pouches. The conveyor will speed up and slow down accordingly. The pouches move from the smart belt to indexing lugs that feed the packs into the wrapping section. At that point, if there’s a gap, the indexing lugs will stop and wait for another pouch before continuing.

Wrapping up the benefits

It’s more than a matter of improved efficiency, says Bethel.

“The intangible benefit is that the people who work in the area now have nice shiny new wrappers on those two lines,” Bethel says. “And you can guess which lines the people want to work on. They’ve added a real morale boost for our employees. We are extremely pleased with the machines.”

Since only two of the four wrappers have been replaced by the Ilapak units, Ryt-way employees still have to monitor two of the old machines. Their main function is to place overflow pouches into empty lugs. Others are deployed in checking that each lug gets one pack. As Bethel puts it, “Despite all their good intentions, they could still screw something up on the wrappers.”

Speed has also increased, although only by five pouches/min. According to Bethel, Ryt-way is running the new machines at 100 pouches/min.

On each of Ryt-Way’s lines, popcorn comes to the packaging equipment in “super sacks” and is gravity-fed down to a hopper on a volumetric packaging machine. The correct volume of popcorn is dropped into the open microwave-popping bags. The paper/film-laminated bags are indexed down to the next station where oil is inserted. Sealed and folded, the bags then go across a checkweigher and into the Ilapak wrapper.

As the sealed bags of popcorn convey past the checkweigher, they enter the smart-belt infeed conveyor, which is equipped with what Bethel calls a “driven bead roller system.” Photoeyes detect pouch placement on the belt to determine whether to speed up or slow down the conveyor. The pouches are subsequently conveyed into the indexing lugs that feed into the wrapping section.

The 12”-wide wrap unwinds over a forming tube, and the pouches are conveyed into the tube of film. The machine then uses rotary jaws that heat seal and cut the tube into individual bags.

“Service has been tremendous,” Bethel says, speaking of Ilapak’s attention, training, and follow-up service calls on the machines. “I get calls from them virtually every month wondering how things are going,” he says.

When the machines were first installed, for example, one of them needed a replacement part. Bethel says he called an Ilapak service person at 8:30 a.m., notifying him of the problem.

After identifying the cause of the malfunction, Ilapak had a replacement part taken by courier to a New York airport and air shipped to Minneapolis. Ilapak sent another courier to the airport in Minneapolis to pick up and deliver the part directly to Ryt-way. Bethel says he had it on his desk by 6:15 p.m. that day. “And that was a complete warranty replacement.”