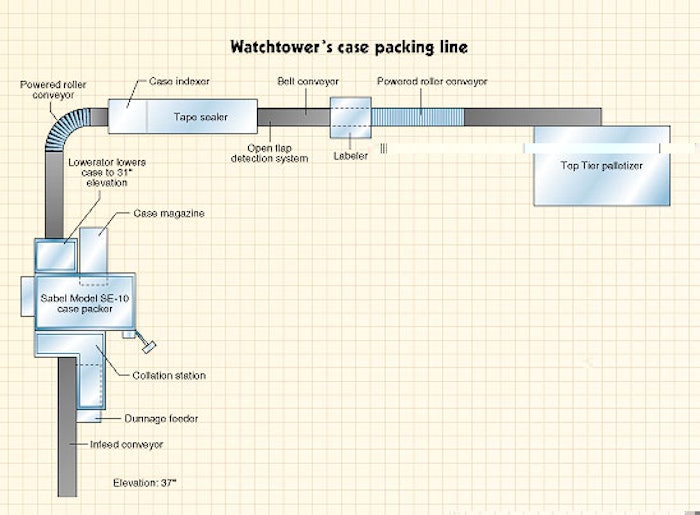 Books enter the case packing line on an infeed conveyor and are then stacked for case packing in a down-stacking chamber.

Every year, religious text publisher Watchtower Paperback Books of New York, NY, distributes millions of books all over the world. For years, volunteer workers manually packed the books into corrugated cases and then palletized the cases by hand. But last October, on one paperback line, a bottom-loading case packer and a palletizer were added, enabling the company to reduce the number of volunteer operators on the packaging line from five to one.

The SE-10/M bottom-load modular case packer is supplied by Sabel Engineering (Sonoma, CA). Watchtower opted for the bottom-loading case packer over a side-loading version because the company wanted the book covers to face up when the case was opened, rather than being on end. Also deemed inappropriate was a wraparound case packer, because forming the case around the product could stress the books, possibly damaging corners and scratching covers.

While Watchtower is using only one case packer, the Sabel unit is made up of four modules: magazine feed, collation, case loading, and case sealing. In this case however, Watchtower opted to leave the case sealing module out and replace it with a downstream alternative.

According to Ralph Lindem of Watchtower, the publishing organization recently switched some of its products from hard to soft cover publications. To accommodate the change, Watchtower added not only the case packer but also new equipment for perfect binding.

Following binding, the publications are trimmed and stacked. The stacker places the books in short piles of varying numbers. The number of books in each stack is a multiple of the total number that will eventually be placed in a case. Because the stacks must be transported to the case packer’s collation module on a low-friction belt conveyor, they need to remain less than 7 1/2” high to avoid toppling on the conveyor. The conveyor itself was specially designed by Sabel with a low-friction surface to cut down on product scuffing.

Upon reaching the collation module, the books are pushed into a “down-stacking chamber.” This takes the small stacks and places them several layers high in the chamber. The amount of layers depends on the thickness of the books. The collation module also arranges the stacks of books into groups of two or four. Because the books vary in thickness, the collation module is equipped with a dunnage feeder, also from Sabel. The feeder drops a preprogrammed number of corrugated pads between layers or on top of the stacks of books to fill headspace in the case. This step allows Watchtower to minimize the number of case sizes it needs in inventory.

Upon exiting the collation module, grouped stacks of books are positioned beneath an opened shipping case in the case-packing module. Shipping cases made of 275-lb B-flute corrugated are picked by vacuum cups from a magazine feed. The machine opens each case and drops it down over the collated stacks of books. Both major and minor flaps are folded on the bottom of the case but are not sealed. The top flaps remain open. The case is discharged from the case-packing module with the top flaps extended upward.

Next, a lowerator carries the case from the overhead level of the packing module down to a powered roller conveying system just 31” off the floor. Because Watchtower has occasional short runs of books, it needs the conveyor to be at a level that allows for easy hand packing of short-run cases.

The cases are powered down a roller conveyor, then around a right-angle turn to a taper supplied by Central Products (Menasha, WI). Watchtower selected a wetted reinforced gummed paper tape to seal its cases. According to Lindem, it needed a tape that would hold up in environments all over the world.

After the cases enter the taper, the machine plows the top flaps closed. The wetted paper tape is applied to the top and bottom. When the sealed cases emerge from the taper, they are conveyed into a detection station, also designed by Sabel, that uses photoeyes to ensure that all flaps are closed. A final belt conveyor takes the case to an ink-jet printer that was used by Watchtower prior to the installation of the Sabel case packer. This unit prints destination, originating address, and graphics. A powered roller conveyor delivers the cases to a new automatic palletizer from Top Tier (West Linn, OR), which, according to Lindem, was a perfect fit for Watchtower.

“The palletizer isn’t as huge as some of these other machines, and Top Tier was very willing to work with us. The machine is relatively simple and straightforward, yet it is quite well built,” he adds.

In addition to eliminating volunteer hours, the new palletizer had to provide easy assembly as well. Watchtower’s case packing line is located on the ninth floor of its New York facility. Volunteer workers had to take the machine apart, move it in pieces up a freight elevator to the ninth floor, and reassemble it. In preparation for the move, Watchtower sent five of its trained personnel to the Top Tier facility to learn about the machine’s operation, mechanical concepts, and assembly. According to Lindem, the installation went as smooth as possible.

“The whole process only took 60 man hours,” he says, attributing this partly to the simplicity of Top Tier’s palletizer. “There were basically wires to be reconnected, and a few things to be reconfigured.”

Also very helpful were the volunteers who pitched in to help on the installation, Lindem says.

“In the two to three months that it has been in operation, the palletizer, along with the newly installed case packer and taper, has helped greatly to increase productivity, reduce repetitive-motion injury, and cut the number of our volunteer workers by four or five,” he says. “We usually only work one shift, but, in that one shift, we need to be as productive as possible.”

Nearly all the books Watchtower publishes measure either 6¼”x43/8” or 7”x9”. Changing from one size to another on the Sabel case packer takes about 20 minutes and includes some mechanical adjustments.

If, however, the only change is in book thickness, then the changeover process is considerably simpler. About all that’s required on the case packer is for an operator to make selections from a menu at the control panel of the Sabel case packer to ensure that the correct amount of dunnage is placed on top of the books in the collation module.

Sabel was very helpful in teaching operators how to use the new case packer, says Lindem. The operators flew from New York to Sabel’s headquarters in California for training. When they returned, they were able to install and run the machine without Sabel’s direction.

“Our people went out there when Sabel was in the process of getting the equipment ready to ship to us,” Lindem says. “They liked it very much, and I have to agree. We have had some [challenges] to work with, this being our first excursion into something like this. And with the few problems we’ve had, Sabel has been very quick to do something about them.”