This steel producer works closely with a distributor to protect shipments of its 36ꯠ-lb steel coils by stretch wrapping them in vapor corrosion inhibitor film. 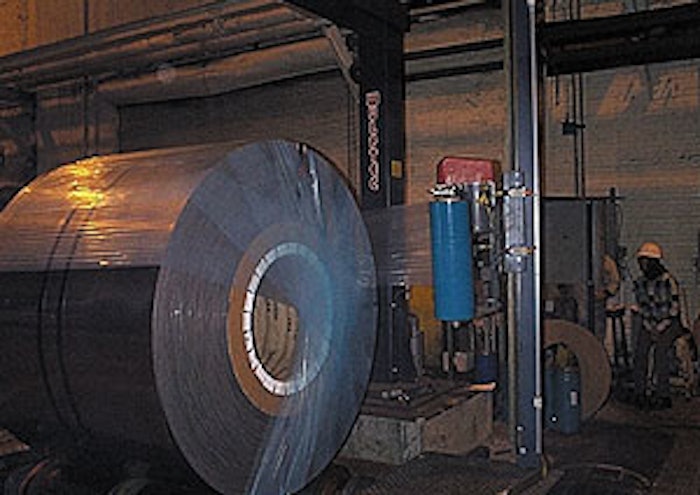 While rotating on powered rollers, a 36,000-lb steel coil is stretch wrapped in 2-mil LLDPE film treated with vapor corrosion in

Thanks to the ingenuity of its distributor, Weirton Steel is lowering labor and materials costs to protect shipments of its 36ꯠ-lb steel coils. Saving money is vital to any business, but it’s especially so for the Weirton, WV-based steel producer as it competes against foreign steel imports.

Weirton’s relationship with Liberty Distributors (Triadelphia, WV) led to last year’s switch to stretch film with vapor corrosion inhibitors (VCI) to protect coil shipments. The film is wrapped around the coil while it rotates on large powered polyurethane rollers rather than on a pallet. The film is wrapped over two corrugated tube-shaped inserts and two doughnut-shaped sidewall protectors that are positioned into the “eye” of the steel coil. The materials “cocoon” the steel coil.

The four corrugated components, which are VCI-coated, help prevent damage when the coil is moved via a forklift. The combination of materials replaces a mix of corrugated and VCI-treated paper packaging components. The change “has greatly reduced corrosion,” says Craig Misselwitz, general supervisor of cold mill operations at the facility.

“If we send out a coil and in transit it gets wet and rusts, they [the customer] claim so much of that coil back for rust, and we have to make good on that claim.” Since the switch, Misselwitz says, “I can’t remember the last time we had a claim for that. It’s nearly eliminated the problem.”

Eliminating all the costs associated with such returns and make-goods saves money. “We face foreign imports where they’re selling steel at a cost lower than what [it costs us to] produce it,” he relates. “In order to be competitive, we try to cut our internal costs.”

Adding VCI to the mix

The 2-mil linear-low-density polyethylene stretch film is supplied in 20” widths by Cortec (St. Paul, MN). The critical VCI comes from a powdered chemical that’s mixed into the master batch of resin used to blow the Cor-Pak™ VCI stretch film. It provides the moisture and oxygen barrier that protects the steel from corrosion. It also adds much-needed strength to the film. Cortec tints its film blue to differentiate it from competitive films.

Cortec also supplies a liquid VCI coating that’s applied to the linerboard used to make the doughnut-shaped sidewall protectors. Weirton personnel fit two doughnuts onto each coil after placing two tube-shaped inserts inside the eye of the coil, one from each side.

The load is then stretch wrapped on one of two WRT-150 semi-automatic stretch wrappers from Wulftec (Ayer’s Cliff, Quebec, Canada). Liberty serves as a distributor for both Wultec and Cortec. The wrappers were added last year to what the steel producer refers to as its temper mill in the Weirton, WV, integrated steel mill. The tempering process strengthens the steel and readies it for customer use.

Overall, the mill produces around three million tons of steel annually. The steel is sold to distributors and manufacturers of everything from electrical boxes to appliances, furniture, and automotive parts. To the best of Misselwitz’s knowledge, the steel produced at the temper mill is not used in any packaging applications.

“Before adding the wrappers, we relied on the standard paper materials used in the steel industry to protect these coils,” says Misselwitz. “We decided to make the change based on visits to our customers out in the field. They asked us if we would try stretch wrapping. For a long time, that was too expensive a process.” That’s where Liberty Distributors came in.

“Previously in the steel industry, stretch wrapping these horizontal coils could only be done with a machine that used a trolley-type system where the car rode through the eye of the coil and it encompassed the coil with film inside and out,” explains Liberty’s director of sales, Jan Martin. “It’s an automated system with considerable bells and whistles, but it’s pricey—in the $750ꯠ to $1 million range, I believe,” she says. “And in a lot of cases, it wasn’t even wrapping quickly enough for the mills.” For those reasons, that type of machine wasn’t appropriate for Weirton.

“The key was for us to try to develop a cost-effective solution,” notes Misselwitz.

“We’ve worked with Jan Martin at Liberty for years,” says Tom Thayer, strip steel area manager at Weirton. “We discussed with her the idea [of stretch wrapping coils], and she went out and found the equipment, the stretch wrap, and the corrugated materials. She visits our mill regularly. We put a team together with personnel from maintenance and engineering, and she became part of that early last year.”

Martin explains that she’s worked with Weirton for most of the 11 years she’s been with the distributor of paper products, packaging and shipping materials. “In the past, Weirton dealt with specialty distributors in the steel industry,” she says. “We never really had an opportunity to get involved in this type of project. We’ve supplied Weirton with tapes and janitorial supplies, but we didn’t get involved in specialty packaging until the last few years.”

Martin focuses on packaging applications, but over the years she’s learned more about the steel business. She explains, “I kept my ears and eyes open, and I focused on what I felt Weirton could do better. They approached their big distributors to come up with a system that was affordable and could be instituted quickly. I asked for a chance to see what we could do, and I sat down with Craig and learned what Weirton expected of the equipment. We brought in Cortec and Wulftec and the project began to evolve.”

Martin realized that “nobody trying to develop a stretch wrap could really get a good seal on the coil.” She worked with Weirton and the suppliers to find a solution. Liberty and Weirton developed the fiber core and the corrugated paper doughnut that helped make it possible to stretch wrap on more economical wrapping equipment.

“An average-sized coil weighs about 36ꯠ pounds and measures 42 inches wide,” notes Weirton’s Misselwitz. “The stretch wrapper cocoons the steel for protection.” The equipment wraps film around the rotating load.

With more than a year of stretch-wrapping experience under its belt, Weirton has realized some key advantages. “We produce about 24ꯠ coils a year that are wrapped on these two machines,” notes Thayer. “With this machine, we’re saving 20 to 25 percent in overall labor costs.”

Besides labor, Thayer says, there’s “a savings of $8 per coil. We’re using about eight fewer pounds of corrugated and banding for each pallet load.” That equates to $192ꯠ a year.

Fewer materials also require less space at the Weirton facility. “We have approximately 4ꯠ square feet of space for packaging in the temper mill area,” says Thayer. “But with the change in materials, we now need only 600 square feet.”

Misselwitz adds, “The machines are very economical. We did tests on the films and learned that the Cortec film gave us the best combination of price and protection. We put about 14 wraps around each coil, and we prestretch the film.”

Another benefit, Thayer explains, “is that there were environmental advantages. Not just in using less material, but also because it’s easier for our customers” to recycle or discard these materials than was the case with previous materials. That’s because “the previous paper-based components used a heavier, woven paper that landfills wouldn’t take,” Misselwitz recalls.

Perhaps the most telling sign of Weirton’s appreciation of the equipment is that another area in the mill is installing four new Wulftec wrappers, which mill management anticipates will further increase its efficiency.

“Like most companies in this industry, we’re always looking at ways to improve our product, and if we can, to cut costs,” summarizes Thayer. “Liberty came up with good ideas that saved us money, improved our process, and improved the quality of the product we send to our customers.”

“Our customers like the recyclable materials, and they’ve dropped claims for rust to nearly nothing,” Misselwitz concludes.