Sterilizing a depyrogenation tunnel by means of vaporized hydrogen peroxide is a first at Organon’s recently installed vial filling line. 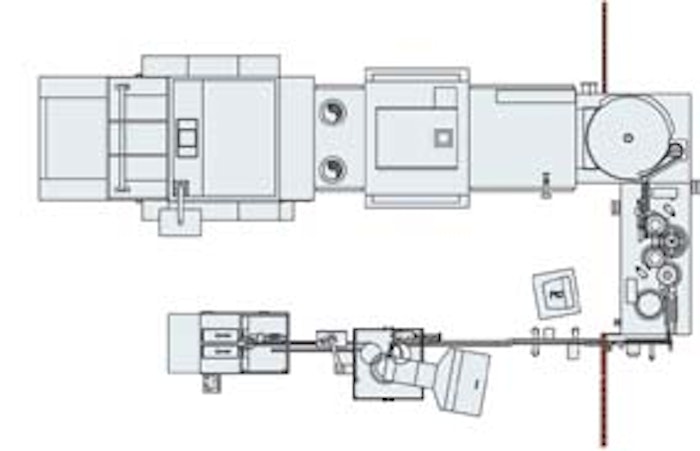 This drawing shows the U-shaped aseptic filling line from beginning to end.

A new aseptic vial-filling line at Organon Ltd. in Dublin, Ireland, represents the very latest in aseptic sterilizing and filling technologies that have come into the pharmaceutical industry in the past few years. Capable of sterilizing, filling, stoppering, overcapping and tray-packing 300 vials/min, the line requires only three operators.

It’s also one of the first commercial applications of a patented system for sterilizing a depyrogenation tunnel with vaporized hydrogen peroxide.

Organon uses its new line to fill 2”-tall glass vials with 0.6 mL of a hormonal fertility treatment called Puregon® Solution. Women can receive the treatment either by self-administration or by their doctors via a hypodermic needle. Until this product presentation was available, these products were only available freeze-dried, so they had to be reconstituted before injection. Those products remain available. But by adding a dissolved drug in glass vials as an alternative delivery system, Organon can offer its product as a convenient, ready-to-use medication as well.

Many pharmaceutical products are filled into vials, stoppered and capped in a cleanroom environment and then terminally sterilized in a high-heat environment. But terminal sterilization was not an option in this case because the products being handled could be damaged if exposed to high temperatures.

“The alternative to terminal sterilization is aseptic filling,” says Tony Byrne, technical services manager at Organon. “Vials and stoppers are sterilized and fed into a filling/stoppering machine where the vials are aseptically filled under laminar-flow HEPA-filtered air. In keeping with trends in the industry, we have located the filling/stoppering machine in an isolator that is operated via glove ports to minimize the potential for product contamination. This enclosure is sterilized using vaporized hydrogen peroxide and is then kept sterile during production by means of overpressured HEPA-filtered air. The use of hydrogen peroxide to sterilize the depyrogenation tunnel, as well as the filling/stoppering machine enclosure, results in the vials being transported through a sterilized environment from the time they are depyrogenated until after stoppering.”

To install such a line, Organon tapped the Italian firm IMA, represented in the U.S. by IMA North America (Fairfield, CT). The equipment was in place by late ’98. Approval from the necessary European authorities came late this summer, and shipment of vials was just getting underway as Packaging World went to press.

The equipment on the filling line consists of the following:

The rotary table and the filling/stoppering machine are in a windowed stainless-steel enclosure that’s HEPA-filtered to a Class 100 cleanliness level. Operators do not enter this enclosure during production. If they need to access the inside of the enclosure, they do so via glove ports.

“Barrier technology like this isn’t new,” says Byrne. “But it remains challenging because the more closed up a machine is, the more difficult it is to work inside it. Here, for example, we have to work through glove ports. We also had to minimize the width of the machine and the enclosure it’s in, or we wouldn’t be able to reach what we needed to through the glove ports.”

Also challenging is getting rubber stoppers and glass vials into the Class 100 filling/stoppering environment. At Organon, stoppers are loaded into a special container and then sterilized in an autoclave. After sterilization, the containers are connected to the filling/stoppering machine enclosure using a specialized RTP (rapid-transfer port) system from LaCalhene (Rush City, MN). A valve on the container enables the sterile stoppers to be fed into the IMA stoppering equipment.

Vials, of course, must be sterilized, too. First they’re washed in a linear washer using hot water of very high purity. Then they enter the laminar-flow sterilization and depyrogenation tunnel from IMA. (Pyrogens are any matter of bacterial origin capable of causing a fever in a patient, and depyrogenation is a means of eliminating them.)

The tunnel consists of three zones: infeed zone, hot zone and cooling zone. All zones are ventilated with laminar-flow HEPA-filtered air. The vials enter the infeed zone and are conveyed by a moving belt through the hot and cooling zones. In the hot zone, air in the range of 350°C (662°F) is used to depyrogenate the vials. The sterile, depyrogenated vials are cooled to room temperature in the cooling zone and then discharged directly into the Class 100 enclosure that contains the rotary accumulation table and the filling/stoppering machine.

The IMA Sterifil F400S filling/stoppering machine uses an eight-nozzle time/pressure dosing system to fill vials. The machine also uses two robotic arms, one ahead of the filler and one after, to sample net weights every 35 sec. Each robotic head quickly transfers a vial onto a load cell and then returns it to the flow of vials. The weight of the empty vial is compared to that of the full vial, thus determining the net weight of the product in the vial. Net weights are stored in the system’s computer memory so that dosing amounts can be measured and, if necessary, adjusted.

Before exiting the enclosed filling/stoppering cabinet, vials pass through a 16-station rotary system that plugs each vial with a rubber stopper. Vials then convey outside the Class 100 clean room through a laminar-flow transfer conveyor to an IMA Alu 400 capper that is also ventilated using laminar-flow HEPA-filtered air. A continuous-motion rotary machine, the Alu 400 places an aluminum overcap on the vial and uses a rolling action to crimp the flange of the overcap to the neck of the vial. This ensures that the stopper stays in place and guarantees drug integrity. An IMA trayloader completes the line.

Where the IMA line breaks new ground is in the process used to sterilize the depyrogenation tunnel. Traditionally this has been done in one of two ways: by subjecting the interior surfaces of the tunnel to intense heat, or by spraying some suitable disinfectant solution on all available surfaces and basically swabbing the interior of the tunnel.

The heat-treatment option was rejected, says Byrne, because it stresses the tunnel construction due to expansion and contraction, and provides large hot surfaces that are difficult to insulate at the interface between the tunnel and filling machine enclosure. Spraying and swabbing, on the other hand, are time-consuming, difficult to perform and validate, and run the risk of introducing contamination into the tunnel when opened.

Neither spraying nor heat sterilization of the tunnel cooling zone is used on the Organon line. It’s one of the first to use IMA’s patented VHP (vaporized hydrogen peroxide) sterilization. It’s a method of sterilizing by means of hydrogen peroxide injected in a vapour state inside all three zones of the depyrogenation tunnel. During the injection phase, the tunnel is hermetically sealed, and the sterilization cycle is performed in sequential phases to ensure a high concentration of sterilizing gas in every nook and cranny of the complex tunnel. At the end of the cycle, a special control system eliminates the sterilizing gas and efficiently aerates the machine. The total tunnel sterilization and aeration cycle takes up to 20 hours and is typically carried out at weekends with virtually no operator involvement.

“This technology increases our level of assurance that sterility has been achieved,” says Byrne.

He also says he appreciates IMA’s willingness to co-ordinate and work with a number of other companies to install and integrate the complex system.

“They had all the ingredients we needed, delivery lead time was good and the price was acceptable,” says Byrne.