A 350 piece/min wrapping machine at Whetstone Candy relies on PC-based controls and a single software program to control logic, motion and HMI functions. 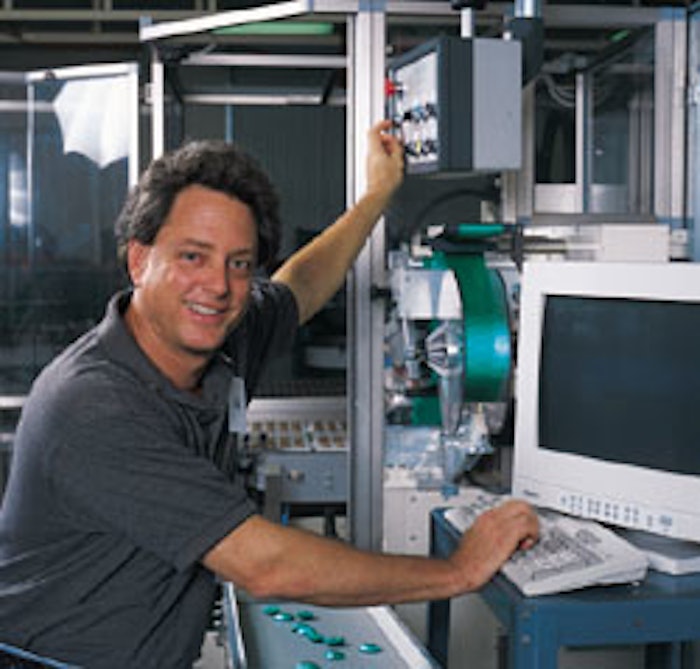 Hank Whetstone pauses at the PC keyboard through which he controls his high-speed candy-wrapping machine.

“We have one programmable device rather than the three separate ones you might expect to find in an installation like this,” says Whetstone. “Troubleshooting, or dealing with error conditions, is much easier this way. We don’t have to know three different programs, one for logic, another for motion control and a third for HMI. All three are governed by the Steeplechase software.” Controls integrator Motionex (Charlotte, NC) introduced Whetstone to the Steeplechase software.

Chocolate comes from the molding operation in countermolds that hold the Seashells 12 across and four rows deep, or 48 pieces per countermold. The robotic row feeder uses 12 vacuum pick-up cups to pick one row of candy at a time and place it in the pocketed infeed of the wrapper, which delivers the candy in the proper orientation to the wrap station. There, roll-fed foil is wrapped around each piece of candy at a rate of 350 pieces/min.

The motion of the pocketed infeed conveyor/ wrapper is driven by an AC drive and motor. On this motor is a master encoder that continuously informs the PC controller of the precise position of the wrapper. The other three modules—countermold positioner, robotic pick-and-place row feeder and foil feeder—are all run by servo motors controlled by the Steeplechase software. Relying on information provided by the master encoder, the Steeplechase software synchronizes four axes of motion performed by the three servo-driven modules to the motion of the AC drive/motor pair on the pocketed infeed conveyor/wrapper.

“Before now, these machines were strictly mechanical, with everything driven off mechanical cams and gears,” says Whetstone. “This is the first time on a Carle & Montanari machine that servo motors are used like this. It requires a proportional relationship between the non-servo portion of the system and the axes of motion that are servo driven. The Steeplechase software establishes that relationship.”

This kind of synchronized relationship, which Steeplechase calls “electronic camming,” is most commonly achieved via separate, dedicated controllers. It typically includes the use of separate motion controllers that receive signals from a PLC to send torque, velocity, position and speed information to drives, which power the servo motors accordingly. But in that kind of PLC-based environment, three completely separate software programs come into play: one for logic control in the PLC, one for the motion controllers and one for the HMI function. The significance of the Whetstone application is that all three of these functions are controlled by one Steeplechase program.

Inputs and outputs are as important as ever in this PC-controlled environment, and these are communicated via an Allen-Bradley Remote I/O network from Rockwell Automation (Milwaukee, WI). I/O nodes are wired back to an Allen-Bradley industrial scanner card in the PC. The Steeplechase software manages incoming data and responds via a driver that sends motion commands to a motion card that’s also in the PC.

In the vacuum pick-up cups on the pick-and-place unit, there are two additional actions synchronized with the position of the master encoder: vacuum on/off, which permits pieces of chocolate to be effectively picked up, and blow down on/off, which ensures candy is cleanly released. Each of these is governed by its own programmable limit switch, which controls outputs based on the position of the master encoder.

Now that the first application of Visual Logic Controller has been successfully implemented at Whetstone, Hank Whetstone looks forward to implementing it throughout his plant.

“We must have 30 PLCs in our plant, and our hope now is that PC-based Steeplechase solutions can replace some of them to help us homogenize and standardize our controls picture,” says Whetstone. “Maybe our engineers won’t have to keep learning new systems every year or two. At least that’s the promise of this new software. We’re still a bit cautious, because it forces you to think in terms other than the terms of ladder-logic programming. But we’re sold on the idea of a single platform that works across different people’s I/Os and different people’s servos.”