Foodservice packs at twice the speed 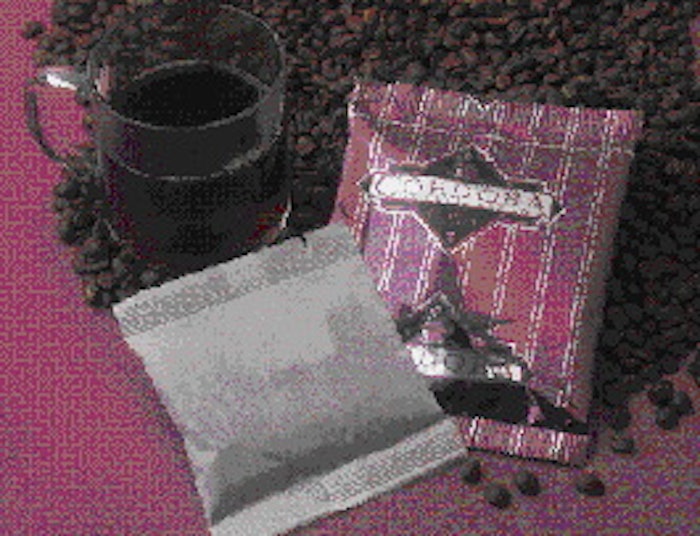 Claudio Cordi, president of Cordoba Coffee in Rexdale, Ontario, Canada, was convinced that sales of coffee filter-packs to hotels represented a growth opportunity. But he reckoned that success would never come without a serious upgrade in packaging equipment, specifically the machinery used to wrap the 7-oz filter-packs in metallized polyester.

Cordi found the equipment he needed in a horizontal flow wrapper from Artypac Automation (Laval, Quebec, Canada). Running at speeds to 100/min, the machine replaces a laborious two-step process that required substantial downtime for changeover. This was necessary because, until the flow wrapper was installed, the company used the same machine for two separate packaging jobs. Cordi explains.

"We used to produce a predetermined number of filter-packs on our vertical form/fill/seal machine and set them aside. Then we'd remove the auger section of the machine and replace the roll of coffee-filter paper with a roll of metallized polyester. We'd also put a wider forming shoulder on the machine.

"As the form/fill/seal machine produced pouches from the roll of metallized polyester, we'd manually drop a filter-pack down the chute into a pouch each time the sealing jaws closed. We were lucky to do 40 per minute.

Inefficient though it was, this method of operation was adequate as long as the company didn't pursue the coffee filter-pack business too aggressively. As Cordi puts it, "We were able to operate that way for about two years because it wasn't an area of business that we were promoting."

Gradually, however, as Cordi saw more and more growth potential in this foodservice niche, he began to think about equipment that would help increase output and improve efficiency. When he saw a flow wrapper operating at the plant of a customer that sells sandwiches through vending machines, he decided such a machine might offer the solution he was looking for. He selected the Artypac machine because it looked like it would handle his requirements and because, unlike some wrappers costing between $100ꯠ and $140ꯠ, it was priced in the $40ꯠ range--$40ꯠ Canadian, that is.

"It's built in Montreal, so the [unfavorable] U.S. exchange rate didn't enter the picture at all," says Cordi.

Since installing the Artypack flow wrapper in September, Cordoba Coffee now overwraps its filter-packs at about 100/min. Little has changed on the Rovema (Lawrenceville, GA) vf/f/s machine that makes the filter-packs. The individual packs drop from that machine's sealing jaws onto an incline conveyor that elevates them a few feet so they are suitably positioned for dropping onto the flighted infeed conveyor of the Artypac machine.

In theory, says Cordi, the two machines could be timed so that manual intervention could be eliminated. In practice, however, an operator stands where the incline conveyor drops pouches onto the Artypac infeed. As long as the operator makes sure each flight on the infeed conveyor has one filter-pack squarely centered, the flow wrapper runs smoothly. A built-in counter is set so that when 200 packs have dropped out of the wrapper and into a corrugated case, the machine pauses. At that point a second operator moves the full case to a taping station and puts another box in place so production on the Artypac can resume.

The metallized polyester used at Cordoba is 11/2 mils thick and is supplied by Acorn Packaging (Mississauga, Ontario, Canada). "Actually, I've tried several different structures, including polypropylene," says Cordi. "They all ran fine on the machine as long as we made adjustments in temperatures and dwell times." A combination of cost and machinability led Cordi to the current film.

Acorn surface-prints the polyester pouch material flexographically in two colors. Currently, the forming and sealing is not done in register, as the graphics don't require it. But Cordi had Artypac build the machine with a photocell in place that seeks out a registration mark on the printed film should forming in register be necessary. Cordi also plans to position a thermal-transfer or hot stamp imprinter on the flow wrapper so that his hotel chain customers can print customized messages such as "Enjoy your stay" or "Compliments of..." on the pouches.

Cordi is delighted with the improved efficiency he's gained since the flow wrapper was installed. But he hasn't given up on the possibility of synchronizing the timing of the vf/f/s machine and the flow wrapper. "Part of the difficulty is that the form/fill/seal equipment is an intermittent-motion machine, while the flow wrapper is continuous," he says. Somehow one gets the feeling that isn't going to thwart an innovative entrepreneur like Cordi.