To better contain its breakfast sandwiches and make them easier to eat, Pizza Hut Express employs an unusual 'Wrappie.' 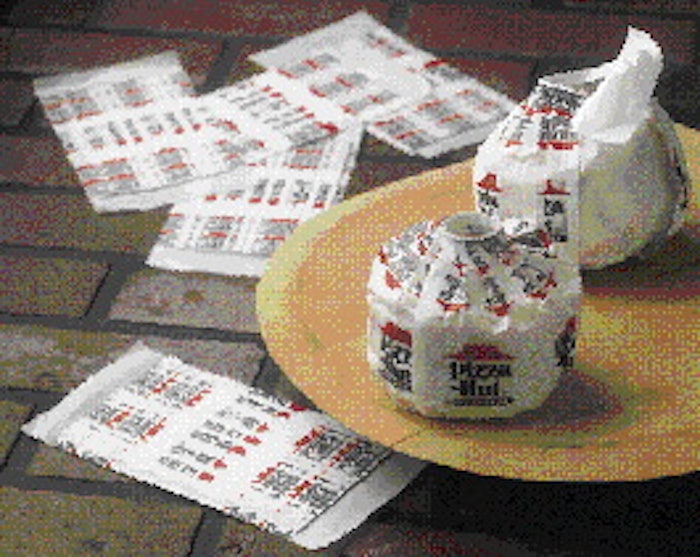 Grabbing a bite to eat while rushing to catch a plane isn't much fun. Nor is taking food out of a wrapper and spilling crumbs on one's clothes. Pizza Hut Express restaurants wanted to help its customers prevent these mishaps, so the Dallas, TX-based company turned to the Wrappie® by Wrapco Packaging Technology (Miami Lakes, FL).

The company started testing the Wrappie for its breakfast sandwiches in November '98 and launched it nationally last May in more than 300 Pizza Hut Express locations that serve breakfast. The Wrappie packaging system uses pleats so a sandwich can be unwrapped a little bit at a time. By exposing just a small portion of the sandwich, the Wrappie contains the majority of the sandwich, thus reducing crumbs while also retaining heat.

That's just what Pizza Hut Express was looking for, says Tom Tucker, manager of national training for the restaurants. "We use a Parmesan cheese-coated bun [for our breakfast sandwiches] that produces a lot of crumbs," he says. "We were searching for something that we could put our logo on, which would hold the warmth and travel a little better than the traditional flat paper wrapper."

Pizza Hut Express restaurants are located in airports, hotels, bowling alleys and stadiums. They serve a wider variety of foods than Pizza Hut restaurants, including breakfast sandwiches of egg and meat or just egg on a bun made of dough similar to pizza dough.

Not only does the Wrappie offer benefits to Pizza Hut Express customers, it meets the needs of company employees, as well. "We were concerned about employees being able to properly wrap the product," Tucker says. That hasn't been a problem with the Wrappie. "It only takes minutes to show someone how to wrap a sandwich in it," says Tucker. He adds that the procedures used to wrap the sandwiches with traditional flat paper wrap were more difficult to teach people.

Another concern of Tucker's was product identification. "We wanted something that we could still put our logo on," he says. Before the wrappers are pleated, they are printed with the Pizza Hut Express logo. As the Wrappie is pulled around a sandwich, the pleats expand and the logo becomes easily recognizable.

Each wrapper consits of two pieces of paper joined in a hinge-like fashion. One piece is pleated, the other is not. Both pieces are 14# paper that's extrusion coated with polyethylene. The pleated piece is flexo-printed in two colors with the Pizza Hut Express logo by Jen-Coat (Westfield, MA).

The making of a wrappie begins with two separate rolls of paper being fed onto a pleating machine from MGA Productique (Lyon, France). The printed roll is wound around a cylinder that has a series of indentations. Vacuum pressure draws the paper into these indentations to create the pleats. Another cylinder with male protrusions that match the female indentations presses against the first cylinder to finalize the pleats.

Subsequent tooling in the MGA Productique system performs a series of heat-sealing and cutting actions that produce individual Wrappies measuring 7"x31/2". These are discharged onto a takeaway conveyor for packaging. A divider at the end of the machine separates the Wrappies into 50-count bags, and an operator hand-packs 2ꯠ Wrappies into a corrugated case.

Tucker says the cost of the Wrappies was "almost identical" to the flat paper wraps. While he couldn't say whether the new wrappers have increased sales, he reiterated their benefits. "The real benefit for the employees is the ease of use with the Wrappie," says Tucker. "Customers say the sandwich wrapper is unique in that crumbs don't fall on them like they do with the traditional wrap."