Paint pouch packing is under control

Testor packages modelers' paints in a flexible pouch on a hf/f/s machine modified for the purpose. A PLS, a PLC and a complementary logic module contribute greatly. 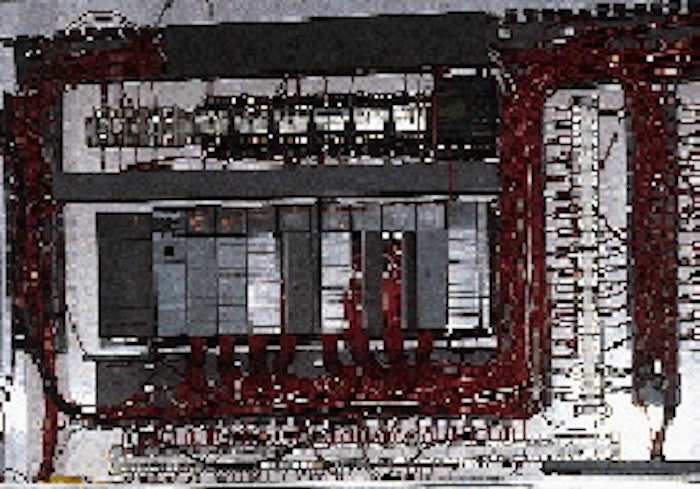 L ogic instructions can be easily entered on the keypad and LCD display of the universal logic module. To the left and below is

Marketers at Testor Corp. saw enormous potential in switching from a glass jar to a flexible pouch for 2/3-oz quantities of modelers' paints (see p. 36). So the Rockford, IL, company installed and modified a horizontal form/fill/seal machine to execute the package conversion. Some of the most important modifications, as it turned out, were in the control cabinet beside the machine itself.

When the machine arrived at Testor, it had no programmable logic controller. Instead, it was controlled by a programmable limit switch, the PLµS from Electro Cam (Roscoe, IL). An encoder on the main drive shaft constantly updated the PLS as to the shaft's position. Based on that position, the PLS sent output signals to actuators or solenoids that triggered film advance, film cutoff, heat sealing or other actions required to form, fill and seal a pouch.

Testor's ambitious plans for the machine didn't render the PLS obsolete. But as new product development manager Adam Morrison puts it, the machine needed additional functionality because a whole new range of actions were being added, including such things as placement of the dispensing fitment, fitment sealing, film notching, and dispensing-fitment closing.

Testor gave the hf/f/s system the functionality it needed by adding an SLC 5/03 programmable logic controller from Allen-Bradley (Milwaukee, WI). It now functions as the machine's main brain. Outputs from the PLS tell the PLC where the main shaft is in its rotation. So the PLC knows precisely when a fitment must be picked and placed, when the pouch material needs to be printed or punched, when the fitment needs to be heat-sealed, and when the fitment needs to be closed. After the PLC has signaled whatever actuators are needed to accomplish these tasks, it sends a signal back to the PLS, which then knows to send an output to advance the film again. So the PLC and the PLS complement each other.

Still, the controls package was incomplete without a way of accessing the ladder logic program of the newly-added PLC. "At Testor they had neither the software capabilities nor the PC necessary to program the PLC," says Shawn Breon of Cad/Scan Technologies (Rockford, IL), the integrator that worked with Testor.

Smith found a simple and inexpensive solution to this problem at a seminar sponsored by a local distributor, Barker Electrical (Rockford, IL). There he was introduced to a universal logic module from Siemens (Alpharetta, GA) called Logo!. The device operates as a rudimentary programmable logic controller that's "downstream" of the main PLC. That is, it intercepts an outgoing signal from the PLC, processes it according to simple logic instructions, and passes on the output signal to the intended actuator, cylinder or other device. The logic instructions can be easily entered or modified right on the unit's keypad and LCD display.

"By pressing the module's four arrow keys, an 'escape' key and an 'okay' key, Testor people can program specific machine functions without having to program the PLC," says Breon.

Testor uses the module, for example, to provide the flexibility to adjust dwell time in heat-sealing the fitment to the flexible film. Originally cam-actuated, there was no way to adjust the dwell time short of physically replacing the cam with a different one for each length of dwell time desired.

Now, dwell time is adjusted by a pneumatic cylinder that's electronically rather than mechanically controlled via software in the Logo! module. Making an adjustment is as easy as pressing the keys on the face of the display unit, thus signaling the pneumatic cylinder to increase or decrease dwell time.

The logic in the Logo! controller is completely separate from that in the PLC. The signal to heat-seal a fitment still comes from a PLC output. But it is routed through the Logo! module, through which Testor can program in a longer or shorter dwell time as it sees fit.

If Testor didn't have the Logo! module, then complicated software and a PC would be needed to program the PLC itself. Or a human-machine interface would be required to allow operators to make the change from a touch screen display. A second-generation pouching machine, now being designed by Cad/Scan Technologies, will indeed incorporate these touches. Its Allen-Bradley PLC will be accessed through a pentium®-powered PC operator interface from CTC Parker Automation (Milford, OH). But for today's machine, says Smith, the Logo! module, measuring all of 5"x3.5"x2" and costing about $150, is just the ticket.

"If we need to change an output, we program it easily on the keypad," says Smith. "We can even do it on the fly."

Installation was a snap, says Smith. "You just plug the module in on a DIN rail."