Integrated manufacturing is the island way

Management at this start-up water marketer decides that the only way to assure bottle availability and top quality is to blow its own PET bottles in-line with its brand new filling line. 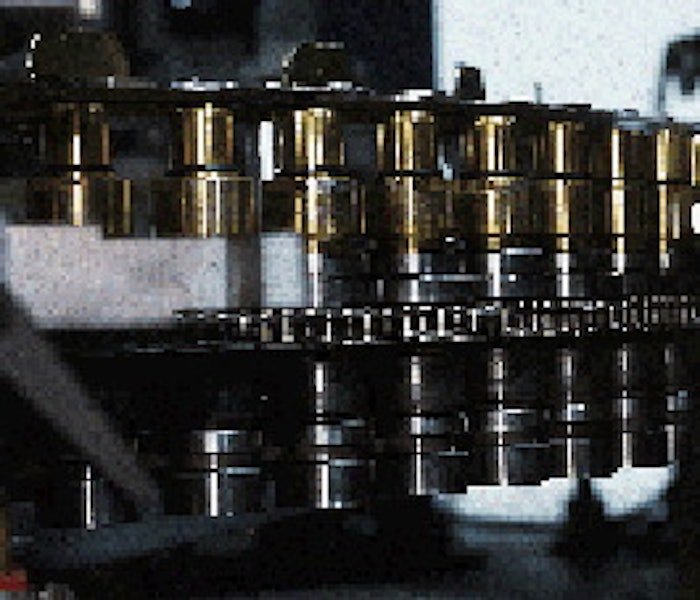 After PET preforms are unscrambled and oriented by an overhead device, they?re sent down this track into a wheel that inverts t

In-line blow molding and filling of polyethylene terephthalate bottles has always appealed conceptually to manufacturers in the beverage industry. After all, receiving gaylords of small, injection-molded preforms is far more efficient than taking in pallet loads of blown bottles, which are mostly air.

But the appeal has proven more conceptual than real. The big drawback is speed. PET bottling lines routinely run at speeds beyond the range of all but the most advanced blow molding systems. Also worrisome is that if either half of a blow/fill line goes down, the entire operation could grind to a halt. Finally, blow molding remains technically challenging enough to make most bottlers wary of diving into it.

Bottlers who weigh all these factors and still decide to go ahead with an in-line blow/fill system usually have unique circumstances dictating their decision. Which brings us to Natural Glacier Waters of Vancouver, British Columbia, marketers of Névé glacial waters and Canada Icefield spring water. NGW's bottling plant is right at the source of its water, and that source happens to be on Vancouver Island, nearly a two-hour ferry ride from the west coast of British Columbia, Canada. Shipping blown bottles by ferry to such a remote spot would be most inefficient, so self manufacture makes all the sense in the world. That's why the company just completed installation and commissioning of a six-station Blowmax reheat-and-blow molding system from the German manufacturer Krupp Corpoplast (Branchburg, NJ). With a rated output of 120 bottles/min, the Blowmax sends any one of four bottle sizes, 500- and 710-mL or 1- and 1.5-L, through an air conveyor system to a monoblock rinser/filler/capper and then to secondary packaging equipment right through to pallet wrapping.

Perfection on a small scale

NGW's vice president of business development Herman Poon readily acknowledges that the 120-bpm speed of the Krupp system is less than blistering. But he emphasizes that the integrated blow/fill line is not designed to produce bottles in huge volumes. The aim is to perfect an integrated blow/fill system on a small scale so that it can be duplicated and, eventually, expanded on a high-speed basis.

Because the Krupp system isn't of the high-volume variety, that doesn't mean it's devoid of outstanding engineering features. At the top of the list for Poon is the machine's ability to automatically start or stop according to conditions at the downstream filler. "When we saw that we were very impressed," says Poon.

No operator intervention is required for these starts and stops. Sensors downstream from the blow molder detect when bottles are backed up, and a signal is sent to the blow molder's programmable logic controller to halt the infeed of preforms. The Krupp system then goes into a "dry cycle" mode until preform infeed resumes.

For operations manager Andre Radermaker, ease of operation is what impresses him most in the Krupp system.

"It's more operator-friendly than previously was available," says Radermaker. "It incorporates more self-diagnostics, too, so that it practically looks after itself. To start it up, you call up the desired bottle size on the operator interface panel and that bottle's profile is automatically set."

Evidence of the machine's user friendliness, says Radermaker, is in the two 19-year-olds who operate the machine, one for each shift.

"Neither one had any experience in blow molding equipment," says Radermaker. "They spent five days with Krupp in Hamburg, Germany, and came back fully proficient on the machine. To me that's mind-boggling. It's usually more like six months to get where they did in five days."

Also useful to NGW is how easily changeover is accomplished.

"It's a bit unusual to make four sizes of bottle on the one machine," says Radermaker. "But we've got changeover down to under an hour when the switch is from one size to the next one up or down. Quick-couple molds are a big help. In each half, the back part, where the cooling lines run and where all the mechanical components for operation are located, stays put. Only the much smaller front part, the portion that contacts and actually shapes the bottle, is removed and replaced."

Preforms arrive at NGW in large corrugated gaylords. An automatic dumper empties the preforms into a floor-level hopper, which in turn feeds a bucket elevator leading to an overhead hopper/unscrambler. From there, a single file track takes preforms down to the infeed station of the blow molder.

A wheel grabs each preform, inverts it and puts it on a mandrel upside-down. The mandrels are transferred onto a large rotary platform that is the heart of the preform heating system. The mandrels also carry preforms through the six-station blowing unit. After discharging a finished bottle onto an air conveyor for transfer to the filler, each mandrel moves through a transfer wheel and back to a position where it can pick up another preform.

Preforms are heated by 10 heater boxes, each fitted with 10 quartz lamps. Unlike previous generations in which the lamps were controlled in pairs, the new Blomax has lamps that are controlled independently. It brings more flexibility and accuracy in getting the preform to just the right temperature profile from top to bottom.

Like any lamp, the quartz lamps in the heater boxes must be replaced from time to time. Here again the machine design simplifies the task.

"We can take each heater box out in thirty seconds with no tools," says Radermaker. "All you do is turn two handles and flip a quick-release lever and just pull the whole unit out."

Energy-saving features designed into the machine also appealed to Radermaker. Reflector panels in each heater box make sure the heat stays in a vicinity where the preform can easily soak it up. Also in each heater box is a fan that recirculates the heat.

Important as quick-change features and energy savings are to NGW, it's the machine's overall reliability that pleases Radermaker the most. To him, it's just another component in a bottling line.

"With the system we have in place I really don't see any difficulty in the concept of blowing and filling in-line," says Radermaker. "The blow molder has been very reliable."

It's so reliable that the firm is no longer exploring plans for a storage silo that might act as a buffer should the blow molder be out of production. The buffer idea was never popular in the first place, says Radermaker.

"Our philosophy is to fill that container as quickly as possible after it's blown," says Radermaker. "Why handle the container again after it's been blown? All you're doing is presenting an opportunity for scratching or contamination."

Radermaker observes that major suppliers of blow molding equipment are actively developing blow-and-fill systems themselves, a trend he views as further evidence of "where the technology is headed."

Reliable as NGW's Blomax system is, in case there is a problem with it, the machine has a built-in modem that lets it communicate directly with Krupp engineers in Hamburg.

"If we want to change a program or do some troubleshooting, we have an on-line connection with Germany," says Radermaker. "We haven't utilized it yet, but it makes us more comfortable knowing it's there."

As NGW moves into full-scale production this fall, one focus of attention will be the preform. "The preforms at this point aren't especially lightweighted," says Radermaker. "That will be the next stage. It's not just to cut costs but also to be more effective at packaging source reduction."

Business development manager Poon has even more ambitious ideas about preforms. He sees in-house injection molding as a logical next step. Additional blow/fill lines are on the drawing board, as well.

"Running 120 bottles/min is slow when you're talking about a 500-mL bottle," says Radermaker. "But that speed for 1.5-L bottles is around the industry average, so it would make sense to dedicate this filling line to 1.5-L bottles and produce smaller bottles on a faster line."

Radermaker and Poon make it clear that faster blow/fill lines won't be achieved at the expense of quality. "Regardless of speed, each and every bottle has to be good," Radermaker points out. "Our goal with this first line was to run at admittedly slower speeds but with much greater control over all parameters. From there, we'll work toward high speed without sacrificing that same level of close control."

In time, he believes, the faster lines NGW requires will become a reality. As he puts it, "If you can couple experience with new technology, you usually make the right decisions."