Conveyors carry cases of glass-bottled spirits over a bridge for palletization and stretch wrapping. That saves this Canadian distiller more than $500ꯠ per year. 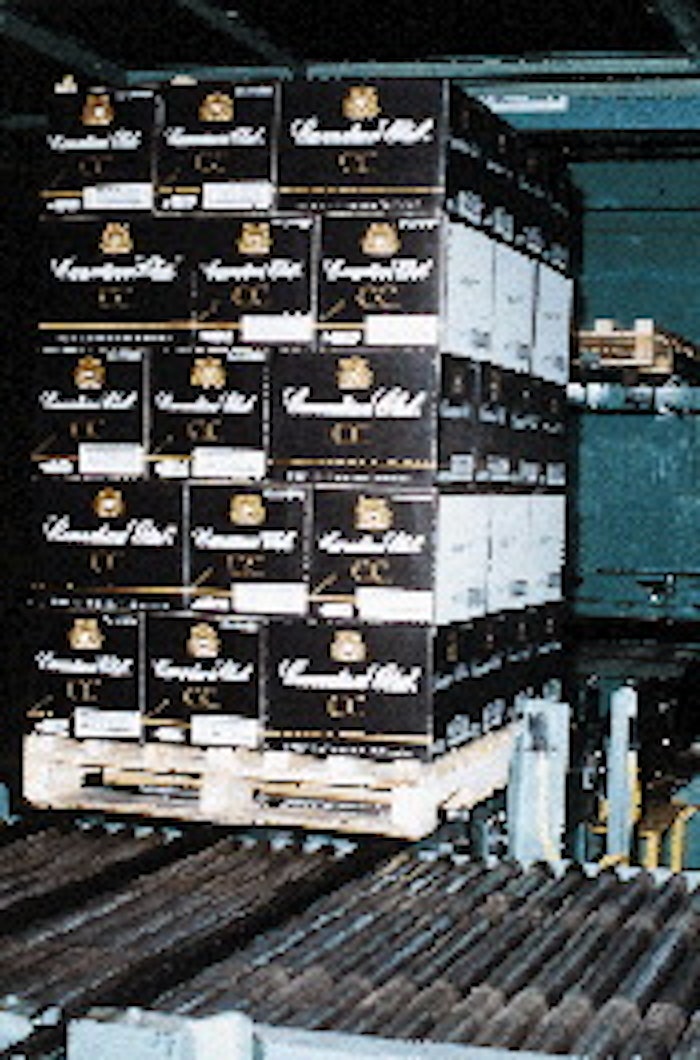 Hiram Walker & Sons ships nearly five million cases per year of spirits from its Windsor, Ontario, Canada complex. For years, forklift trucks and hoists carried pallet loads of bottled, cased spirits from a bottling facility over a bridge to the shipping building across the street. But as volume increased, this process became inefficient and costly. In the latter half of 1996, the distiller added 3ꯠ' of roller and belt conveyor from Mathews Conveyor (Danville, KY) to help handle additional volume. And instead of sending unwrapped pallet loads of finished cases across the street, the plant now conveys individual cases across the street for palletization in the shipping building. The payoff: The handling change eliminated the need to purchase new forklift trucks for these tasks and the costs to maintain them. Breakage is no longer as serious a concern as it had been, and labor costs plummeted. Altogether, these advantages combined to save the company some $534ꯠ/yr. "One of the drivers of this project was that we had a plant closing in British Columbia, and all that volume came here to Windsor," recalls John Logan, manager of finished goods maintenance. "To handle that business, we had to increase the productivity of our material handling system. We also upgraded two of our filling lines." The bottling plant houses eight filling lines. They're primarily for glass bottles, though some polyethylene terephthalate bottles are run as well. Canadian Club is the most famous brand, and it's sold worldwide. Hiram Walker also worked with Mathews to upgrade its four existing palletizers, equipping each with an SLC 5/04 programmable logic controller from Allen-Bradley (Milwaukee, WI). Added was a new Mathews WR3 series palletizer (also with an SLC 5/04) and two case accumulation lines. Logan doesn't miss the days when pallet loads of finished goods were transported across the street. "Until we added the conveying equipment, a pallet would be conveyed to a hoist that would lift it to another conveyor that took it across the bridge," Logan explains. "Another hoist would lift the pallet off the bridge and bring it down to shipping where it would be stretch-wrapped and then carried by a forklift into a truck. There was a lot of forklift truck traffic, and there was some breakage of product because sometimes a load could become unstable when it was lifted, causing cases to occasionally fall. That's an expensive loss," he laments. With the new conveyors, cases, not pallets, are automatically transferred via conveyor from bottling, across the bridge into the shipping building where they're palletized and stretch-wrapped, then moved into trucks for distribution. Bridging the 200-yard gap between the two buildings with conveyors has paid off for Hiram Walker. Logan says the forklift trucks took up considerable floorspace, which is now used to warehouse incoming supplies. More importantly, however, the conveyors helped the distiller improve the plant's efficiency. "The entire finished goods installation allowed us to better achieve our goals of real-time processing and decreased product breakage," adds now-retired Don Clary, who served as project coordinator of engineering services at the time of the change. "We've always been satisfied with Mathews products. We had a discussion with them, explaining what we wanted to achieve with this project, and that it needed to be completed within a five-week period," Clary notes. "They designed and supervised the installation of the new system, all while our operations remained up and running. They achieved the goals of the project on budget and on time."