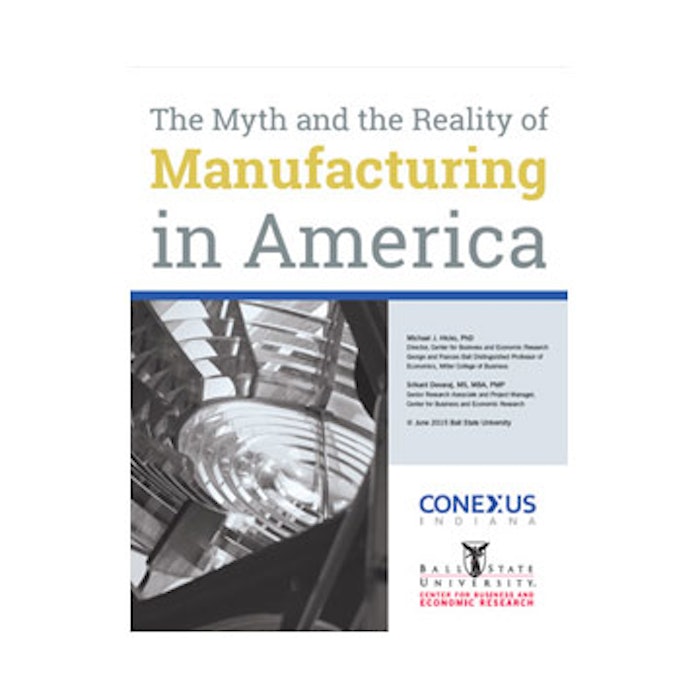 “The Myth and the Reality of Manufacturing in America,” issued in late Juneby Ball State’s Center for Business and Economic Research (CBER) and Conexus Indiana, the state’s advanced manufacturing and logistics initiative, found that openings for new manufacturing jobs will range from 80,000 to 150,000 a year over the next decade.

“There are major misunderstandings among the public and the media about the manufacturing sector,” says Michael Hicks, Director of CBER and the George and Frances Ball Distinguished Professor of Economics at Ball State. “The U.S. manufacturing base is not in decline, and we have recovered from the recession. Nor are jobs being outsourced because American manufacturing can’t compete internationally. Moreover, new jobs in manufacturing pay well above the average wage.”

The study notes that the Great Recession had lost its stranglehold by 2014, when U.S. manufacturers attained record levels of production.

“Changes in productivity, domestic demand and foreign trade all impact manufacturing employment in the U.S.,” Hicks says, “and it’s important to clarify those impacts in order to understand what is happening in the manufacturing and logistics industries.”

The study also found that:

• More than 87% of manufacturing job losses are due to productivity gains, including better supply chains, more capital investment, and advanced technology.

• Only 4% of manufacturing jobs have been lost to international trade (also known as outsourcing) since 2000.

The report points out baby boom generation retirees are leaving behind good, well-paying jobs in those sectors, and younger workers are filling those jobs at an unprecedented rate. Recent new hire salaries averaged $20.06 per hour—almost $42,000 a year. As millennials move into the workforce, wage gaps between new and existing jobs are primarily age- and tenure-related.

Hicks found that Indiana has been leading the nation in key industrial sectors for the last seven years. He grades all 50 states on these sectors.

Asked via e-mail about job prospects in packaging, Hicks says that with the growth of international and domestic trade it will increase demand for packaging of all types. The use of automation and IT will also play a role.

The report notes that manufacturing has continued to grow, and it remains a large, important, and growing sector of the U.S. economy. Employment in manufacturing has stagnated for some time, primarily due to growth in productivity of manufacturing production processes.

Other notes from the report include the following:

• Manufacturing production remains robust. Productivity growth is the largest contributor to job displacement over the past several decades.

• Sustainable manufacturing employment growth requires high levels of human capital. The nation and individual states should actively support education reforms at the secondary and tertiary level that prepare students for employment opportunities in manufacturing, which will be large due to job turnover among the baby boom share of the manufacturing labor force (see Hicks and Devaraj 2014). Human capital interventions should also begin at the pre-K level, focusing on skills that enable acquisition of the mathematical and cognitive skills required of the modern manufacturing workforce.

Andrew Olsen was appointed Chief Financial Officer (CFO) and Treasurer effective April 19, 2021. He will be based out of the company’s global headquarters in Erie, Pa., and report to Eriez President and CEO Lukas Guenthardt.
Eriez
May 7th, 2021