IoPP’s 2014 Salary Survey reveals a slight retreat in salaries, yet with clear optimism for this year and for long-term packaging careers. 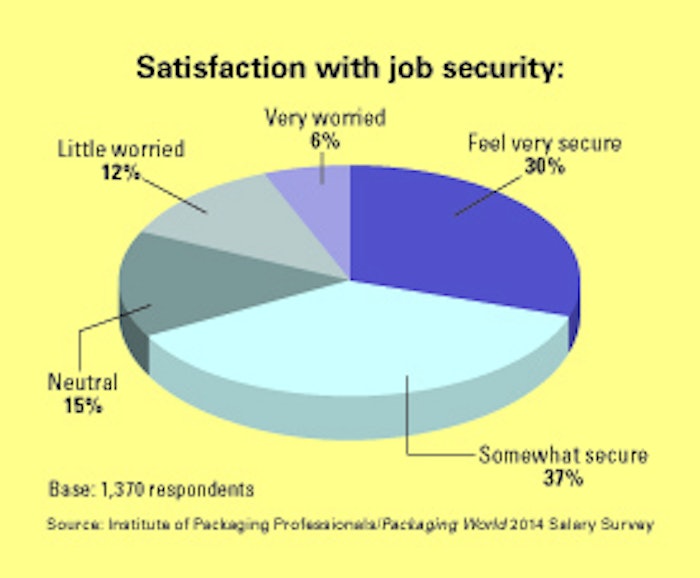 Uncertainty clouds the U.S. job market, and to an extent the results of the 2014 Salary Survey. How so?

The incongruity may be attributable to the fact that a large majority of respondents answering this year’s survey are different than the participants who completed last year’s survey. The portion of respondents who took the survey both years was not calculated.

The compensation decline in 2013 compared to 2012 represents the first time in the past five years that total compensation did not head northward (see Table A). To further cloud the picture, 72% of survey respondents enjoyed a bonus, with the average bonus reported as a healthy 10.18%.

As in previous years, the 2014 Salary Survey was conducted by the Institute of Packaging Professionals and Packaging World magazine, and is developed in cooperation with Gros Executive Recruiters, a packaging sector executive recruiting firm. Kane Consulting provided market research for the survey.

Addressing the salary incongruity, Dennis Gros, President of Gros Executive Recruiters, asks, “Has the workforce of professionals become so accustomed to a tepid economy that they delude themselves into thinking that a $704 cut in pay is the same as a pay increase?”

If the slight salary dip is the bad news, Gros offers a brighter long-term outlook, saying, “Packaging is, overall, a stable occupation. Almost all of the respondents who changed jobs found another job, presumably a better job. Only two percent reported they are currently unemployed.”

Education and gender impact
Two key observations regarding the 2014 survey, Gros points out, concern both education and a narrowing in the male/female compensation gap at the upper level. He notes, “A high school education pays $80,000 per year, compared to a PhD, which pays $123,000. Do the math of eight years of paying work for the high school grad, while the PhD student accumulates eight years of college debt. Multiply [that] by a 40-year working career. Factor in the likelihood that the PhD works at least 10 additional hours per week on the job compared to the high school grad, and [then] compare the two tracks at the bottom line [and] a financial case could be made for on-the-job training.”

That said, education did have a direct impact on salary figures for 2013, where high school graduates earned $80,525, while Post-Graduate or PhDs made $122,949.

Overall, the 1,050 males answering the “compensation by gender” survey question had an average total compensation of $109,134, with the 307 female respondents indicating pay of $91,065.

Job function yields insights
Compensation by job function (Table B) shows that Corporate Management respondents reported the highest earnings in 2013, at $145,416, followed by those in Marketing/Sales and R&D personnel. Not surprisingly, job title was an important factor in total compensation, with Vice Presidents making $133,634 at the top end while Staff Members earned $92,109. Engineers represented by far the largest among job function groups to respond to this survey question, and their compensation averaged $98,116.

The forecast is bright
If the 2014 Salary Survey results are a bit cloudy, Gros offers optimism for packaging job seekers. “Demand for experienced professional talent is up. Candidates are seeing multiple offers again, and I predict significant upward pressure on salaries within the next 12 months.

“Employers who make last year’s monetary offer to this year’s candidate are at great risk of having the candidate politely say no. In the first two-and-a-half months of 2014, we’ve seen more candidates reject offers than throughout all of 2013. This phenomenon puts a tremendous strain on companies that need to balance their quest for new talent against the pay equity of current employees.”