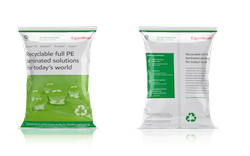 ExxonMobil took up the challenge of replacing MLPs, which the Indian government plans to phase out as part of its Plastic Waste Management Rules, with recyclable PE laminated solutions.

MLP refers to any packaging structure that has at least one layer of plastic as the main ingredient combined with one or more layer of other materials such as paper, paper board, polymeric materials, metalized layers or aluminum foil.

ExxonMobil decided to tackle the issue of MLPs by replacing them with full PE laminated solutions for non-barrier based packaging applications such as for wheat flour, detergent, and salt.

The challenge was to develop a technical solution for full PE laminates which could run at the desired printing and packaging equipment line speeds, while delivering excellent optical properties. ExxonMobil developed multiple full PE laminated formulations that were specifically designed to address the above issues, teaming up with the Shrinath Group, a film converter in India with excellent infrastructure and production capacity in blown film, printing and lamination.

Using ExxonMobil's performance PE polymers ― including ExceedTM XP 8784, ExceedTM 2012, EnableTM 4009, and ExceedTM 1327 ― as well as ExxonMobil HDPE HTA 108, solutions for the PE substrate/top film and the PE sealant film were successfully produced at Shrinath on its Reifenhauser 3 layer blown film line. They were then converted into laminates after printing on rotogravure (BOBST Rotomec) as well as Central Impression (BOBST F&K) flexographic printing machines. Lamination was carried out on Nord Meccanica Simplex machines.

For the f/f/s packaging trial, ExxonMobil collaborated with Syntegon Technology India Private Limited (formerly known as Bosch Packaging Technology), a supplier of packaging machines. The trials took place at its Goa plant, with ExxonMobil and Shrinath's participation. Trials were conducted on an SVZ 1803AR high-speed intermittent-motion vf/f/s  machine with jaw draw-off technology and servo cross sealing system. It is a compact, versatile and operator-friendly bag maker, and consistently produces accurate bags and quality seals with robust design suitable for abrasive and corrosive products.

Line speeds of a maximum 65 bags/min for 500g and 1kg packs could be easily achieved without any operational challenges. Subsequently, the packs passed drop and leak tests to check the integrity.