Crab shells and tree fiber: A replacement for PET film?

Researchers create a flexible, strong, transparent, and compostable film made from crab shells and tree fibers, which they believe could replace plastics such as PET for flexible packaging. 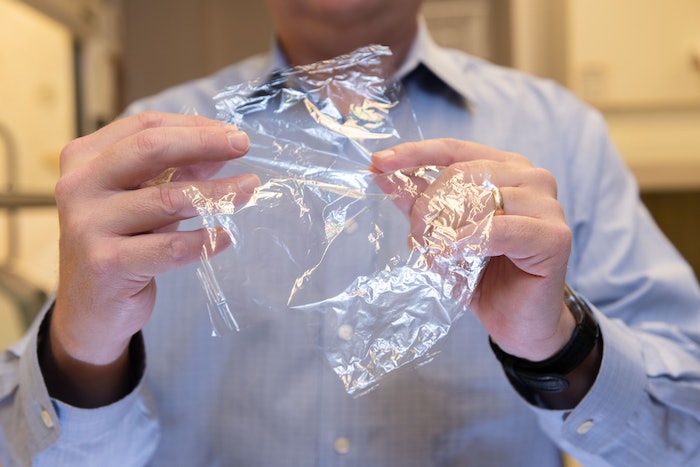 Once fully dried, the material is said to be flexible, strong, transparent, and compostable.

Researchers at Georgia Institute of Technology have created a material derived from crab shells and tree fibers that they believe has the potential to replace the flexible plastic packaging used to keep food fresh. The new material, described in the journal ACS Sustainable Chemistry and Engineering, July 2018, is made by spraying multiple layers of chitin from crab shells and cellulose from trees to form a flexible film similar to plastic packaging film.

“The main benchmark we compare it to is PET, or polyethylene terephthalate, one of the most common petroleum-based materials in the transparent packaging you see in vending machines and soft drink bottles,” says J. Carson Meredith, a professor in Georgia Tech’s School of Chemical and Biomolecular Engineering. “Our material showed up to a 67-percent reduction in oxygen permeability over some forms of PET, which means it could in theory keep foods fresher longer.”

Explains Meredith, cellulose, which comes from plants, is the planet’s most common natural biopolymer, followed next by chitin, which is found in shellfish, insects, and fungi. Using these materials, the team devised a method to create a film by suspending cellulose and chitin nanofibers in water and spraying them onto a surface in alternating layers. Once fully dried, the material is said to be flexible, strong, transparent, and compostable.

“We had been looking at cellulose nanocrystals for several years and exploring ways to improve those for use in lightweight composites as well as food packaging, because of the huge market opportunity for renewable and compostable packaging, and how important food packaging overall is going to be as the population continues to grow,” Meredith says.

The research team also included Meisha Shofner, an associate professor in the School of Materials Science and Engineering and the Interim Executive Director of the Renewable Bioproducts Institute, John R. Reynolds, a professor in the schools of Chemistry and Biochemistry and Materials Science and Engineering, and Chinmay Satam, a graduate student at Georgia Tech.

Explains Meredith, the team had been looking into chitin for an unrelated reason when they wondered if it might have use in food packaging. “We recognized that because the chitin nanofibers are positively charged, and the cellulose nanocrystals are negatively charged, they might work well as alternating layers in coatings because they would form a nice interface between them,” he says.

Packaging meant to preserve food needs to prevent oxygen from passing through. Meredith shares that part of the reason the new material improves upon conventional plastic packaging as a gas barrier is because of the crystalline structure of the film. “It’s difficult for a gas molecule to penetrate a solid crystal, because it has to disrupt the crystal structure,” he says. “Something like PET on the other hand has a significant amount of amorphous or non-crystalline content, so there are more paths easier for a small gas molecule to find its way through.”

Environmentalists have long looked for renewable ways to replace petroleum-based materials in consumer products. Says Meredith, with the amount of cellulose already produced and a ready supply of chitin-rich byproducts left over from the shellfish food industry, there’s likely more than enough material available to make the new films a viable flexible-packaging alternative.

Still, he adds, there’s more work to be done. To make the new material eventually competitive with flexible packaging film on cost, a manufacturing process that maximizes economy of scale will need to be developed. Additionally, while industrial processes to mass produce cellulose are mature, methods to produce chitin are still in their infancy. And, more research is also needed to improve the material’s ability to block water vapor.

Nature Nate’s raw and unfiltered honey is now available in a 16-oz no-drip, no-mess, stand-cap pouch, offering consumers an easy-to-squeeze way to enjoy every drop of honey in the container.
Pat Reynolds
May 20th, 2021
More in Sustainability