Documents steady improvements in aluminum’s environmental footprint over past 20 years, and provides full LCA data for all steps of the manufacturing process. 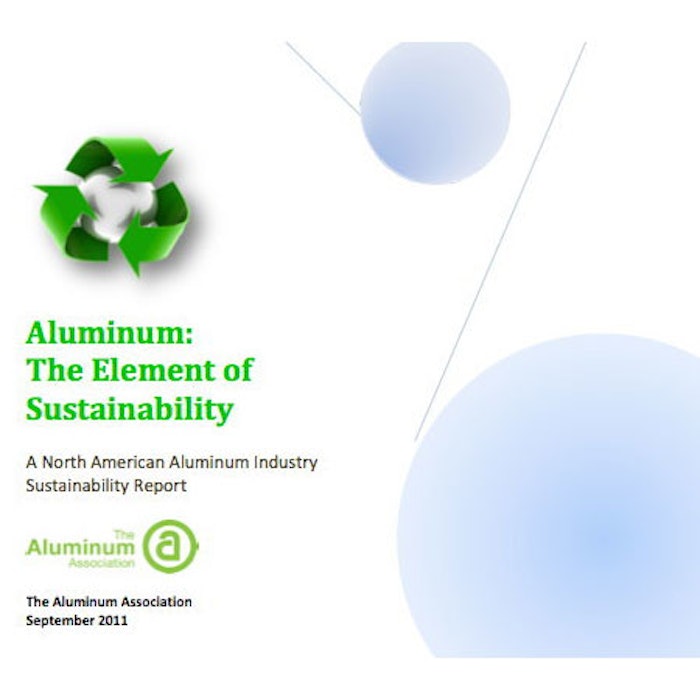 The Aluminum Association, Inc. (AA)  today released the first sustainability report on behalf of the North American aluminum industry. Titled “Aluminum: The Element of Sustainability,” the free, 70-plus page report made its debut at Aluminum Week 2011, hosted in Chicago by AA and the Aluminum Extruders Council (AEC).

According to Steve Williamson of Tri-Arrows Aluminum Inc. and Steve Gardner of AA, the leaders of the association’s Sustainability Initiative who presented unveiled the report, the document includes an “exhaustive collection of data.” Said Gardner, “We have an extremely high degree of confidence in the data.”

The report covers the three pillars of sustainability—economic, social, and environmental—as they relate to aluminum, and it uses a Life Cycle Analysis approach to evaluate aluminum’s environmental impact. As Williamson and Gardner emphasized, the data encompasses all components of manufacturing, including extraction and refining. “We did not cherry-pick in this report,” said Gardner. “There is no greenwashing.”

Included in the report is documentation of across-the-board sustainability improvements in the North American aluminum industry over the past 20 years. Among the findings of the report, since 1991:

• Cumulative GHGs associated with secondary aluminum production have been reduced 65%.

“This study puts hard data behind the key metrics that define sustainability for the aluminum industry,” said AA president Steve Larkin. “It details dramatic reductions in energy use and greenhouse gas emissions that the industry has achieved through process and technological improvements.”

• 90% of the energy consumption associated with primary aluminum production;

Recycling aluminum—which uses only 5% of the energy and generates only 5% of the emissions associated with primary aluminum production—further compounds the metal’s sustainability dividends. According to the report, in 2009, the recycling of aluminum offset approximately 88% of major resource use associated with primary aluminum production.

“We can now respond to challenges from other material suppliers,” concluded Williamson. “No other material can match aluminum’s sustainability benefits or its combination of physical properties.”