Organizer of the K 2013 plastics and rubber show in Europe shares insights on the state of plastics recycling in Europe, including hurdles and new technologies. 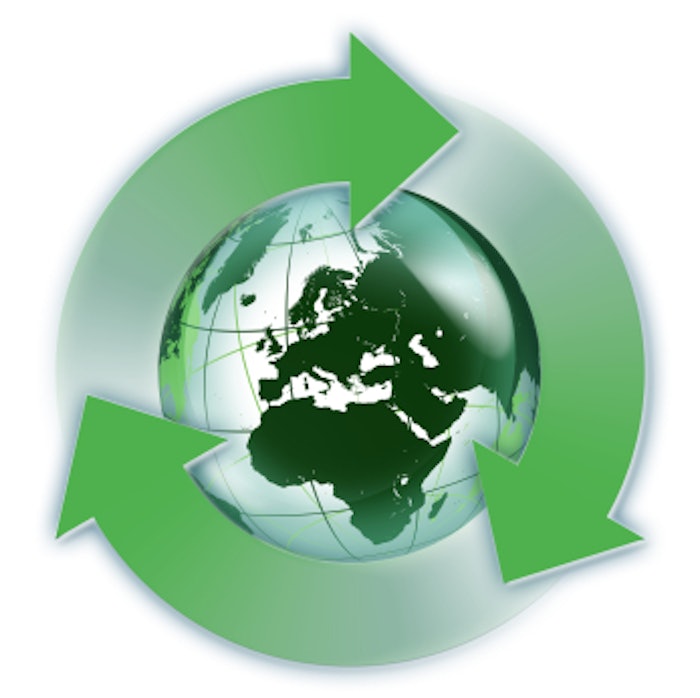 From the 1960s through the 1980s, the plastics industry in Europe gave little thought to sensible ways of disposing of or recovering waste plastics. By 1991, the issue shifted into the spotlight when the German Packaging Ordinance came into effect. Taking the lead at the time, Germany was the first country to set up rules for the recovery of plastic waste and to establish them on the market. Since then, many countries in Europe have developed highly successful strategies for collection and recovery.

According to surveys by PlasticsEurope, about 47 million tonnes (approximately 52 million U.S. tons) of plastic were consumed in the 27 countries of the EU plus Switzerland and Norway in 2011—40% for nondurable and 60% for durable applications. In the same year, some 25 million tonnes (27.5 million tons) of waste plastic were collected—40% going to landfill, and 60% being recovered. The waste from collection systems for used packages accounted for more than 60% of this, followed by products from the construction, automotive, and electronics sectors.

Exemplary collection systems are in place in nine European countries (listed in descending order): Switzerland, Germany, Austria, Belgium, Sweden, Denmark, Norway, the Netherlands, and Luxemburg, with collection rates ranging from 99% to 92%. At the same time, six of these countries have the highest recycling rates in Europe: Norway, Sweden, Germany, the Netherlands, Belgium, and Austria, with rates of 35% to 26%. The remaining collected waste is recovered to generate energy by incineration.

PET bottles are also amenable to single-grade sorted-waste collection and processing. The spectrum of products made from them range from fibers and films to new bottles. A large variety of suppliers, including Austrian companies Starlinger & Co. GmbH in Vienna, NGR GmbH in Feldkirchen, and Erema GmbH in Ansfelden, have developed special recycling lines for PET. Gneuss Kunststofftechnik GmbH in Bad Oeynhausen, Germany, is successful in the marketplace with its MRS extruder, for which FDA approval has even been obtained.

In addition, machine manufacturers are contributing various drying systems, like the infrared rotating drum from Kreyenborg Plant Technology GmbH in Senden, Germany, special filtration systems for the processing of PET, and also crystallization processes like Crystall-Cut from Automatik Plastics Machinery in Grossostheim, Germany. Closed-circuit systems like PETcycle have become established for turning old bottles into new ones.

In short, PET recycling, achieving a market volume of 1 million tonnes (1.1 million tons) per year in Europe, does indeed work.

Problems facing recycling
Plastics items of different materials that cannot be sensibly separated constitute a further obstacle to recycling—as do products whose residues are difficult to entirely remove. Problems are also created by post-consumer film wastes, as they manifest a very poor ratio of surface area to contamination and therefore require laborious treatment.

According to Michael Scriba, managing director of plastics processor mtm plastics in Niedergebra, Germany, there are indeed successful recovery specialists, but as yet no established sales markets with a Europe-wide reach. Further challenges are posed by non-beverage bottles made of PET in a huge variety of types, which also have limited recoverability. Much the same applies to plastics from car and electronics residuals.

For such challenges, processors and machine manufacturers are called upon to come up with appropriate solutions. For example, one solution for post-consumer film wastes from DSD collections has been recently supplied by Herbold Meckesheim GmbH in Meckesheim, Germany, to the waste disposal company WRZ-Hörger GmbH & Co. KG in Sontheim, Germany. The turnkey plant, consisting of a separation device for removing extraneous substances, a wet shredding step, and a Plastcompactor, converts 7,000 tonnes of wastes per year into free-flowing agglomerates with a high bulk density that can be used for the production of injection moldings. Especially for mixed fractions, Erema has teamed up with Coperion GmbH & Co. KG in Stuttgart, Germany, to develop their Corema, a combined recycling and compounding line. Characteristic of this unit is its suitability for a wide range of materials. According to Erema managing director Manfred Hackl, this is an ideal machine for processing mixtures of materials obtainable at low cost and for converting polypropylene nonwoven wastes into a compound with 20% talcum and for processing PET/polyethylene mixtures with additives.

Another special solution is the MRS extrusion system supplied by Gneuss to K2 Polymers in the U.K. for the processing of polyamide 11 regrind. The feedstock comes from deep-sea oil pipes recovered from a depleted oilfield and brought ashore. After decades of service, these pipes are highly contaminated with oil. The Multi Rotation System (MRS) extruder manages to decontaminate and reprocess the high-grade plastics waste in a single step and without chemical washing.

Although many processes have already become established, recycling still has plenty of potential for improvement. A first step could be the recyclable design of plastics items that should be examined closely with a view to later recovery. Suitable recycling processes and machine solutions for the processing of problematical wastes offer a good deal of scope for further development.

The facility will use Honeywell’s UpCycle Process Technology to transform end-of-life plastic waste into recycled polymer feedstock that can be used to create new plastics.
Honeywell Performance Materials and Technologies (PMT)
Jan 28th, 2022