How do patients cope when hurricanes such as Harvey and Irma close pharmacies and potentially eliminate access to life-saving medicines? 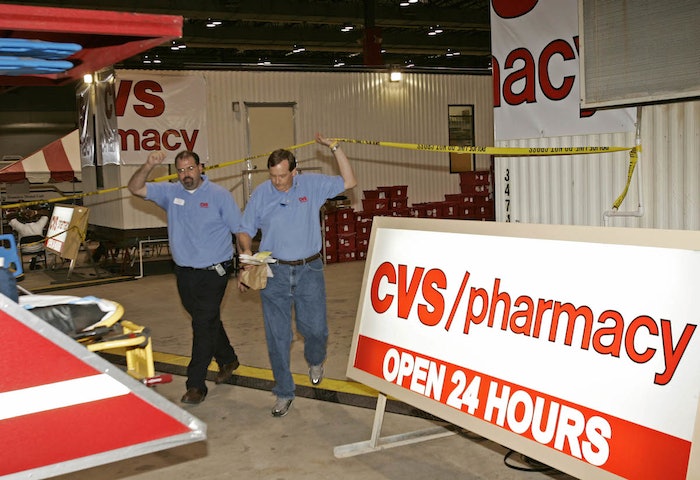 CVS set up this 24-hour pharmacy service at the Reliant Arena in Houston in 2005 for Hurricane Katrina evacuees.

A critical piece of the lifesciences logistics puzzle is addressing patient medication needs when they’ve been displaced by hurricanes and other natural disasters. In these instances, patients often lack access to their pharmacies, which may be closed from flooding or other damage. So then what happens to the supply chain? How do people get their meds? Do they temporarily go without what could be life-saving drugs?

The American Pharmacists Assn. reported Aug. 28, “With many Walmart and Sam’s Club locations closed along the Texas Gulf Coast due to Hurricane Harvey, Walmart is sending mobile pharmacies to Rockport, Portland and Aransas Pass. …In advance of the storm, the company shipped hundreds of truckloads of water and more than three dozen truckloads of emergency supplies to stores throughout South Texas.”

Direct Relief, a humanitarian aid organization active in 70 countries and in all 50 U.S. states, recently ran a story, “As Hurricane Irma Approaches, Life-saving Medicine Staged Across Florida, Caribbean.” It noted, “Direct Relief has already prepositioned emergency medical supplies at 14 locations across Florida, ready to be used by clinicians as needed. The packs contain enough medicines and supplies to treat 100 people for 3-5 days.”

On Aug. 28, CVSHealth published a list of its pharmacy openings and closings, including news that “a mobile pharmacy unit has been set up outside the NRG Center in Houston.”

An Aug. 29 story reported, “Walgreens is donating food items, first aid and medical equipment including blood pressure cuffs, glucometer strips, catheters and transport wheelchairs to the American Red Cross emergency shelter at the George R. Brown Convention Center in Houston. Walgreens is working with United Airlines to transport the first aid and medical items from Chicago to Houston on a flight with relief supplies.”

The American Red Cross on Sept. 5 reported, “It is expected that Irma could impact Florida, and the Red Cross is making plans now to be ready. Red Cross volunteers and relief supplies are being mobilized, and dozens of facilities have been pre-identified as potential evacuation shelters in case they are needed. The Red Cross is preparing enough supplies and resources to shelter at least 120,000 evacuees by this weekend.”