We sent contributing editor Ron Romanik to the March 25-28 TransPack Forum in Orlando for an update on trends and opportunities in protective packaging; here’s his report. 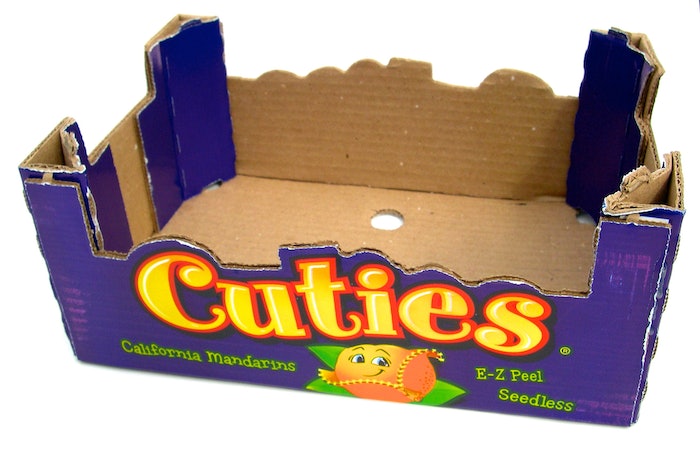 Shelf life and salability all hinge on how well fruit boxes like this protect their content during distribution.

Warehousing and shipping conditions vary widely throughout the world. So the best way to reduce the potential for product damage is to know common practices in new markets into which you’re shipping.

Some of these practices might surprise you. For example, automated handling equipment available in more developed economies might not be as prevalent in less economically developed nations. So if you’re shipping, say, appliances to India or China, you may have to familiarize yourself with such new performance tests as “walking on appliances,” “carrying on the back,” and “setting down from the back”—aka, “dropping.” We’ll come back to these in a minute.

Though large-appliance packaging might be a specialized situation, shipping any goods to far-off lands can be a risky move if the “protective performance” of the packaging system is not up to the task. Distribution and protective packaging topics such as these were discussed and debated rigorously at last month’s TransPack Forum in Orlando, presented by ISTA. ISTA (International Safe Transit Association) is the leading organization of product manufacturers, carriers, packaging suppliers, testing labs, universities, and research institutes dedicated to testing packaging performance, with a slogan of “Distributing Confidence, Worldwide.”

For Brian Wagner, vice president of consulting services at Packaging Technology Integrated Solutions, the TransPack Forum brought this key finding: Many companies are aware of the coming challenges, but they still have limited resources, no internal staff to handle protective package development, no testing, and no established standards. He sees protective packaging as a still young and maturing industry.

But overpackaging can be just as costly. The costs of excessive materials and weight-rated transport over long distances can add up quickly for high-volume goods. When done right, the packaging system minimizes damage while also minimizing material costs and shipping weight.

International standards organizations such as ISTA, ASTM, and ISO have packaging performance standards, and so does ISTA. One of ISTA’s missions is to translate data from the field into repeatable test standards. All of these standards, though, are only “recommended” standards that don’t necessarily hold legal weight.

Another TransPack participant was Christoph Rohr, Senior Specialist of Technology Management Logistics at Bosch and Siemens Home Appliance Group (BSH) in Germany. He was influential in developing the “walking on appliances” test and the others mentioned above.  He also says that BSH is responding to other harsh shipping environments in China and India.

BSH was a pioneer in 1986 when it decided to develop its own living test program to get “close to reality.” The standards in place at the time did not account for the high levels of randomness and variability in the real world. Using shock and vibration environmental recorders (SAVERs) and time and temperature monitoring devices, BSH brought copious amounts of field data back to the lab, as they still do today.

To study the forces acting upon the distribution packaging in the “walking on appliances” scenario, for instance, Rohr and his staff used test mats with 2,000 sensors. These mats revealed how much weight and force was acting on the shipping boxes through workers feet during unexpected conditions like that.

Ed Church, President of ISTA, sees the need for more collaboration among industry organizations to promote best practices even further. There are many facets to packaging, and these affect each other all the time. Church says that more CPGs are realizing how the primary and secondary packaging that contain the product can be designed to minimize protective packaging during shipping.

“We’re really looking at the entire system,” says Church. “I think everyone realizes that the handwriting is on the wall, and we have to set a priority to develop new test procedures.”

Finite element analysis
In developing protective packaging for a specific product, “protection” is the minimal requirement needed to protect most of the product so that it retains its “sale-ability” at retail, wholesale, or home delivery. Much of package performance testing is verifying that a box can withstand the stresses and vibrations commonly found in the supply chain. “Finite element analysis” tries to isolate those factors in measurable and predictable ways.

Delivering goods to shelves in perfect condition can be a competitive advantage in some categories. And it’s often critical during new product or packaging launches to make that first impression positive and memorable. There are a lot of manufacturers that still don’t understand how time- and cost-saving it can be to consider all the options and facets of packaging up front, as opposed to responding to problems later on. At an individual professional level, it’s imperative to break down the silo walls of corporate culture to create an open innovation environment.

Cal Poly’s Singh is dedicated to improving food safety and reducing food waste. This May 20-21, Cal Poly is holding a two-day FreshPACKMoves seminar in Monterrey, CA (www.freshpackmoves.com). Packaging innovations, Singh says, can increase shelf life of common foods that must be shipped over long distances. For instance, reducing bruising of fruit prolongs the freshness of food, and simple considerations like allowing for better airflow in packaging prevent some premature spoiling.

As always, it’s key to know the environments that packaging passes through during its supply chain journey. Often, the only way to really know what is going on is to witness it firsthand. Cal Poly recently did a thorough study of mango packaging in the field to understand the many challenges there, and to work toward a universal packaging solution.

The compromise
Distribution packaging for fast-moving consumer goods is often a compromise between business goals and technology. Everyone wants to reduce corrugated board dimensions for more efficient, lean boxes. But there are tradeoffs.  “There’s a big disconnect between product development and packaging,” says Singh. “Too often packaging is viewed as something that’s isolated and separate from packaging.”

The future will require a complete understanding of all the functions of every level of packaging. But that’s a lot of knowledge. There are more than 75 labs in the U.S., and another 65 outside the U.S, that independently test packaging performance, not including universities and technical institutes. About two-thirds of ISTA member companies—whether manufacturers, packaging suppliers, or carriers—have their own internal testing facilities.

PTIS’s Wagner warns of the realities and due diligence required in international shipping. The truth is, laws and regulations are constantly changing. Standards in Asia are responding to increased demands, but there are, in fact, no standards in Africa. Consumer goods companies rely heavily on suppliers to know what is going on. There’s a great need in the market to not only prove the minimal knowledge, but to innovate to another level that views all packaging holistically.

One final TransPack observation came from Arnold Barlow, senior manager of sustainability at UPS. He takes a long view of distribution packaging and its unmet potential. “I’d like to move beyond ‘How do we package so it doesn’t break?’” says Barlow. “I’d like to see packaging engineering as a great opportunity to add value and to differentiate.”

June 16-17 join your peers for industry sessions, innovation and tech discussions as well as network with peers in a virtual setting.
Jun 5th, 2020
More in Operational excellence