To maximize the ability to change over from one neck diameter to another and to fill either aseptic, CSD, or still products, Bickford’s doubled down on blow/fill technology. 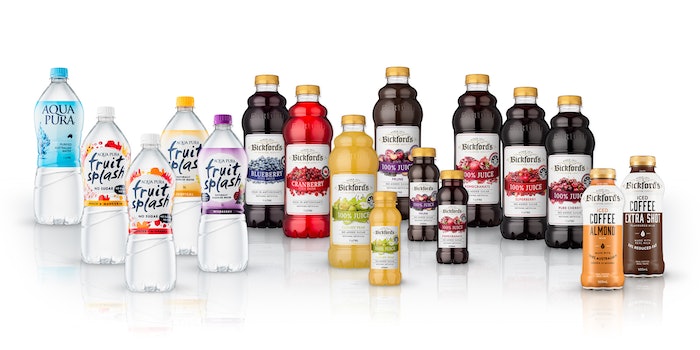 The new line is in response to growing health and wellness concerns around the world that are driving the growth of beverage categories such as bottled water, especially flavored options. Recognizing that this trend represented opportunity, Bickford’s started to search for a highly flexible production line capable of handling both still and carbonated beverages as well as low- and high-acid aseptic products. Moreover, they wanted to run multiple PET bottle designs and to decorate with either a shrink sleeve or a pressure-sensitive paper label.

For this particular challenge, they turned to Sidel packaging machinery, a leader in aseptic PET applications and packaging design, for the first time in their long history. In the process, they became one of the first to invest in Sidel’s dry preform decontamination technology.

“Previously, we were mainly familiar with hot-filling PET applications,” says Angelo Kotses, Bickford’s CEO and owner. “We decided to partially shift to aseptic PET bottling because we wanted to optimize our production set-up and achieve a better TCO, which is of course critical if you plan to attract more consumers. Plus, we really wanted to diversify our product portfolio by introducing new references, including coffee-flavored dairy-based products and coffee-flavored non-dairy product, and by moving some drinks formerly packaged in glass and cans to PET.”

And so it was that Bickford’s and Sidel became collaboration partners in the commissioning of a versatile PET line equipped with an Aseptic Combi PredisTM  blow/fill/cap system for shelf-stable aseptic beverages in three bottle sizes plus a Combi SF300 for non-aseptic beverages, both still and carbonated, in 1-L bottles. Both filling systems feed into the same labelling, sleeving, case-packing, and palletizing equipment, so only one filler runs at a time.

Sidel’s Herve Herambert, Account Director Sales Aseptic South East Asia Pacific, says that it would have been possible for Bickford’s to install one blow/fill system capable of producing all three beverage types—CSD, non-aseptic still products, and aseptic juices and flavored milks. But the firm wanted two different neck finishes: 28-mm for CSD and non-aseptic still products and 38-mm for aseptic products. This made it far more affordable, efficient, and practical to install two separate Combi machines.

By replacing so much of its hot-fill production with aseptic filling, Bickford’s gained great freedom in terms of packaging design and container decoration. In total, the new line now processes more than 20 different SKUs, including still water, CSD, four different flavoured waters, coffee-flavored milk, coffee-flavored non-dairy products,  and eight types of juices. In addition to switching quickly from one product to another, the line also moves efficiently from 250-mL to 500-mL to 1-L bottle sizes.

Throughout the project, Sidel’s packaging experts worked in close collaboration with Bickford’s marketing team to launch their products. “Looking at our water and CSD range filled through the Combi SF300, we wanted to achieve an iconic shape to help our brand stand out in a very crowded marketplace. Our new bottles needed to offer convenient handling to our consumers and be robust enough to hold their ergonomic shape and carbonation once opened,” explains Beverley Reeves, Senior Brand Manager at Bickford’s.

In the case of Bickford’s water and CSD bottles, the Sidel packaging team started from scratch. The bottle they came up with incorporates Sidel’s StarLITETM  base. Formed during blow molding, it gives the finished bottle improved mechanical properties—without the need for adding additional weight to the bottle—that help it resist deformation that might otherwise occur due to top load weight during distribution.

A redesign was also needed for the family of drinks previously packaged via hot-fill technology and now packaged aseptically. In this case, the top priority was to retain as much of the previous design’s brand equity while at the same time achieving some serious lightweighting goals. The results are impressive. The aseptically filled 1-L juice bottle weighs in at 32 g, which is half of what its hot-filled predecessor weighed. Not to mention that the hot-filled PET bottles needed vacuum panels in the sidewalls to prevent the bottles from deforming as internal pressure formed during product cooling. With aseptic filling, these vacuum panels are no longer required, which translates into a smooth and far more attractive surface on which to apply a label.

“We were really impressed by Sidel’s package design capabilities,” says Reeves. “To streamline our decision process, they provided many bottle design alternatives and great conceptual designs with current labels as well as new prototypes. Considering the productivity advantages we gained and the high consumer acceptance around our redesigned containers, we are planning to strengthen the cooperation with Sidel further by launching additional new formats.”

To install the new line, Bickford’s reorganised production set-up and raw material handling. This process was made easier by the removal of two out of three hot-fill lines previously in place. The challenge was to complete the installation without disrupting the production routines, while also securing the very high hygienic requirements needed in aseptic production.

The Aseptic Combi Predis system has six blowing stations that feed directly into 30 filling stations. The key value proposition of the whole Predis concept is that it is small preforms that are being decontaminated prior to blowing rather than blown bottles being decontaminated. With this approach, there is no need to rinse with water, thus the term “dry decontamination.”

Predis™ technology employs the injection of H2O2 into the preform just before it enters the oven. This results in activation of the H2O2 by the existing preform heating stage, ensuring a high level of decontamination while minimizing not only the size of the item being decontaminated but also the size of the sterile zone required. Critical parameters are continuously monitored to ensure full production sterility, beverage integrity, and food safety, regardless of liquid type or beverage characteristics. The same dry decontamination technology is applied to caps with Capdis™, ensuring a 100% dry aseptic packaging solution when Predis and Capdis are combined.

Included in the new operation is aseptic processing technology from Tetra Pak Processing Systems, which, like Sidel, is part of the Tetra Laval Group based in Switzerland. Maximum speed is 13,500 bottles/hr on 1-L bottles.

Over on the non-aseptic blow/fill operation, where 1-L bottles are filled at speeds to 18,000 bottles/hr, the Combi SF300 has eight blow stations and 70 filling valves. Filled bottles run through a 10-station capper. Also featured on the Combi SF300 is Sidel’s compact and hygienic BlendFill configuration for CSD products, combining carbonator and filler in a single system for reduced consumption of CO2. Gebo OptiDry®, a fully washable, stainless steel drying system with a proven efficiency of over 99%, is integrated.

Downstream from the two Combi blow/fill systems, their two discharge conveyors merge into a single conveyor leading to the rest of the line. This includes a VersaWrap® wrap-around case packer and a PalAccess® palletizer, both from Sidel, followed by a stretch wrapper from Robopac (www.robopacusa.com). These pieces of equipment are designed with multi-format versatility and fast and simple format changeovers in mind, therefore perfectly suiting Bickford’s needs.

Naturally, date coding of primary, secondary, and tertiary packaging is part of the new line. This is accomplished by various Videojet (www.videojet.com) systems, including an ink-jet coder that marks the shoulder of each bottle, a thermal-transfer print-and-apply labeller that labels each corrugated case, and a thermal-transfer print-and-apply labeller that applies a label to each WRAPPED pallet.

According to Reeves, “We produce according to forecasts, so it’s hard to say if half the running time is aseptic and the other half not. The flexibility built into the line lets us pivot from one filler to the next depending on what is required.”

Bickford’s first sellable product from the new line was introduced to the market in the summer of 2019. The firm celebrated the opening ceremony for the line commissioning in September in the presence of Australian Prime Minister Scott Morrison and Premier of South Australia, Steven Marshall.

“It’s a pretty advanced and capable line with a lot of new equipment, so we had to get comfortable with that level of sophistication,” says Reeves as she looks back over the past year. “But we’re proud of how it’s gone. There were two key drivers. One was to future-proof the business by bringing in capabilities we did not have at the time and leveraging them not only for our own brands but for contract packaging business, too. And the second was to create something that was world-class, something that would identify us as a leader, something that would say we are firmly planted here and this is where we are going to stay.”

In a move to meet consumer trends, PepsiCo is launching ‘Neon Zebra’ cocktail mixes in aluminum cans, which are due to hit shelves on Monday.
Kim Overstreet
Feb 26th, 2021

This collaboration between academia and a major brand supports the development of technologies to identify and assess viable alternative materials that will reduce the environmental impact of packaging.
Matt Reynolds
Oct 1st, 2020

Bundaberg Brewed Drinks of Australia recently installed a Craftmate C canning line for its premium soft drinks such as ginger beer, which is exported to more than 60 countries.
Pat Reynolds
Oct 1st, 2020

Coca-Cola Delivers A European First with Recycled Paperboard Can Handle