Sonics & Materials, Inc. celebrated its 50th anniversary with a gala luncheon on April 5th at its headquarters in Newtown, CT. 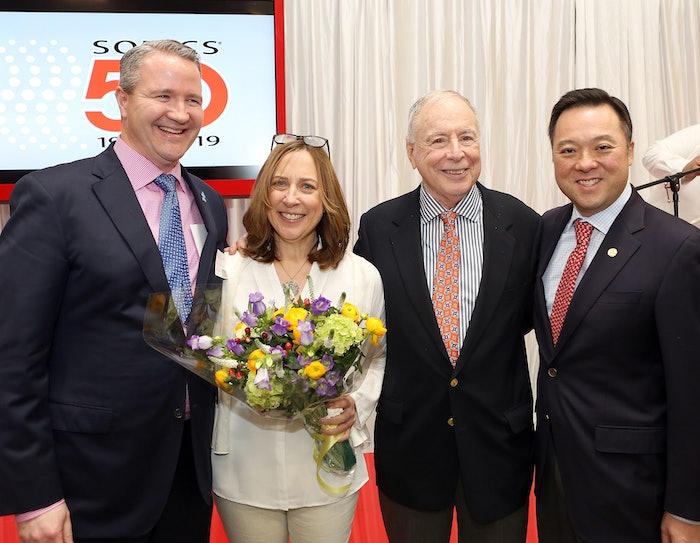 Sonics marks 50 years of manufacturing in the state of Connecticut, as a supplier of ultrasonic sealing systems for packaging applications and plastics assembly.

Sonics & Materials, Inc. was started in 1969 in Danbury by Robert S. Soloff (founder and ongoing CEO) and has been located in Newtown for the last 21 years, with a worldwide network of distributors and representatives, many of whom traveled from as far as China and South Africa to partake in the celebration.

At the luncheon, Robert Soloff announced that his daughter, Lauren Soloff, who joined the company in 1995 and is currently Executive Vice President, will be assuming the office of President, effective immediately, while he will be continuing in his role as Chief Executive Officer.

Over the past 50 years, Sonics has cemented its role as an industry pioneer, acquiring a total of 30 patents (plus 3 pending) for technological innovations, including one this past year for breakthrough hermetic cross seals on gusset bags and stand-up pouch side seals.

These innovations continue the work started by Robert Soloff, who was awarded the original patent for the ultrasonic method of welding rigid thermoplastic parts. This groundbreaking assembly technique is now used universally across many manufacturing sectors, especially the automotive, aviation, medical device, electronics, appliance and battery industries.

In his remarks, Robert Soloff noted the myriad ways in which the simple sound waves at the heart of ultrasonic technology are used today. Speaking of “the almost magical force of ultrasonics,” he went on to say: I like to think of our company as a symphony orchestra where everyone has their part… and together we make beautiful music and produce world class ultrasonic products. Our music, however, is mostly in the 15 to 40 kHz range.”

The company was joined in its celebration, which also coincided with Bob Soloff’s 80th birthday, by several local, state, and federal officials, and included remarks by Attorney General William Tong and Newtown First Selectman Dan Rosenthal, as well as the presentation of proclamations and certificates of recognition.

Last week, Sonics was featured as Senator Murphy’s “Monday Manufacturer,” where the senator was quoted as saying: “I’m happy to highlight Sonics & Materials’ 50 years of service to the manufacturing sector in Connecticut and their commitment to training the next generation of students in the ultrasonics field. Their hard work goes a long way in ensuring Connecticut manufacturing remains competitive.”

A popular topic in the remarks was the importance of manufacturing companies and their contributions to Connecticut’s economic growth. In addition to providing jobs and educating its skilled work force in the specialized field of ultrasonic technology, Sonics offers tuition reimbursement and work study programs to students in local and state technical schools and university programs.

Commenting on her expanded role at the company, Lauren Soloff said “I look forward to continuing our history of innovation … to developing more high-performance ultrasonic solutions for our customers’ varied applications, while continuing to provide them with the kind of service and support that can transform their business. I appreciate the trust my father has shown me, as well as the hard work and support of all the Sonics’ employees who have brought us to 50 years of success.”

Lauren referenced that the years 1969, when the company was founded, and 2019 were “turbulent and uncertain years” but said that being part of Sonics makes her hopeful: “We have employees at Sonics who were born in Brazil, England, Thailand, India, Portugal, France, Philippines, Dominican Republic, Vietnam, Cambodia, and Puerto Rico. We have distributors celebrating with us today who traveled from Italy, Canada, Mexico, China, and South Africa. We do business in no less than 125 countries, including places such as Iceland, Estonia, and Zambia. We are a company of people who practice different religions, have different political beliefs, and we have a wide variety of educational backgrounds, including those who went to technical schools, state schools, private schools, and some who were home schooled.

Yet somehow despite all of these many differences, we come to Sonics every day and work together, problem solve, create and design. When people walk through our doors, whether it be as an employee, customer, vendor, family member or friend, people sense that they are in a place where views are respected, and differences are appreciated – a place where judgement is not based on where you were born or what your diploma may or may not say – but by your unique contribution to Sonics.”