Wittenstein’s Galaxie® gearbox was chosen as a finalist for the 2018 Federal President’s Award for Innovation in Science and Technology. 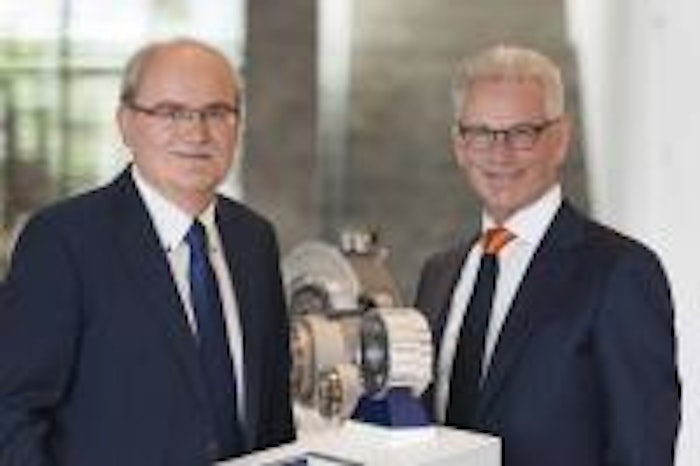 The team of inventors nominated for the Deutscher Zukunftspreis 2018 (from left to right): Thomas Bayer (Manager Innovation Lab at WITTENSTEIN SE) and Dr. Manfred Wittenstein (Chairman of the Supervisory Board of Wittenstein SE)

It was recognized as “A radically new gearbox class – productivity leaps in the engineering industry”.

The new gearbox class has already won two prestigious awards: the Hermes Award in 2015 and the Innovation Award of the German Economy in 2016.

Dr. Wittenstein was proud of the honor, and noted “Germany’s prosperity is built on its engineering skills. The engineering industry is our country’s core competency and the biggest industrial employer. It is vital that this marketability be preserved for the future. We believe that our invention makes a significant and valuable contribution here.”

Originally unveiled at the Hannover Messe in 2015, the Galaxie® Drive System is based on a novel, scientifically proven gearbox class. Galaxie® meets the two requirements of selection for the final round of the Deutscher Zukunftspreis 2018: the award is a tribute to outstanding scientific and technological innovations, and also has the potential to create sustainable jobs.

The announcement of the winning team will take place on November 28, 2018.