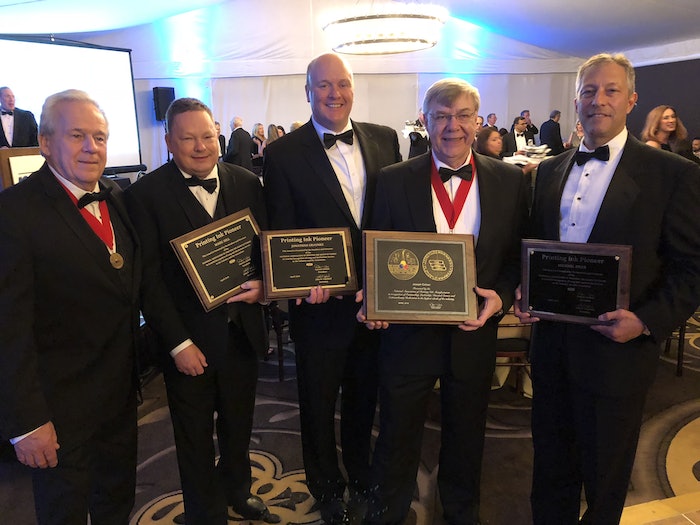 “It was an outstanding night. We have been fortunate to have many of our employees selected by NAPIM in the past, but nothing that rivals what happened this year,” stated John Hrdlick, President/COO of INX International Ink Co. Hrdlick himself won an Ink Pioneer Award in 2013. “Joe has made many significant contributions during his 44 years in the industry, so it was a special moment to see him accept the Ault. I’ve known Mike, Jon, and Mark for many years, and INX is a better company for all they have accomplished.”

Receiving the Ault Award was a monumental moment in a career full of achievements for Joe Cichon. The Vice President of Manufacturing for INX, he previously was honored three times by NAPIM with a President’s Award in 1995, an Award for Technical Achievement in 1996, and the Ink Pioneer Award in 2001. CEO Rick Clendenning was the last INX executive to win the Ault in 2007.

Cichon began his ink career in 1974 and has enjoyed an extended period of industry interaction. A long time speaker at the NPIRI Technical Conferences, he has been involved as a participant with the Conference and Symposium Committee since 1992 and helped shape the message and technical quality of information shared with members. Joe served as chairman of this committee from 1993-1997 and later was NPIRI President in 2007 and 2008.

His experience in the management of strategic projects and initiatives is legendary, especially in the area of SAP deployment. Cichon took INX from a batch-operated legacy system to a full WAN-operated SAP ERP system, managing an MIS department that installed SAP at 39 locations in the U.S.

Michael Brice has served in every capacity of ink manufacturing since 1985. He joined INX as Vice President of Offset Operations in 2011 and has demonstrated leadership while focusing on customer quality and safety, in addition to growing sales. A former President/COO of Superior Printing Ink in New York, Mike was a founding member and President of the Metro New York Printing Ink Association. He won several awards during his print operator days in New York and is a popular speaker at North American Manufacturing Summits.

Jonathan Graunke joined INX as an R&D chemist upon his graduation from the University of Illinois in 1992. Currently the Vice President of R&D – Director of Energy Curable Systems, he has developed a strong team to help make Energy Curable technology one of the largest growth areas at INX. Jon is a frequent speaker on the subject at NPIRI Conferences and summer technical courses, in addition to being a RadTech board member. His involvement with EUPIA and their Food Safety group allows him to offer insight and guidance regarding European guidelines. Jon was a NAPIM Technical Achievement Award honoree in 2012.

Mark Hill began his printing career right after graduating from college, too. A University of Wisconsin grad, he started work at Acme Printing Ink in Appleton, Wisconsin in 1991 and is now Vice President, Assistant R&D Director for INX. He has held various positions over the years and was a key contributor in the introduction of new ink technologies for film lamination inks. Mark’s technical expertise in the flexible packaging market has made him a valuable resource with customers, in addition to his contributions to NPIRI. He’s also an active member of the GAA and FTA associations.