Those who attended PMMI’s Annual Fall Meeting came away with keen insights into the needs of today’s typical food, beverage, and pharmaceutical manufacturers. 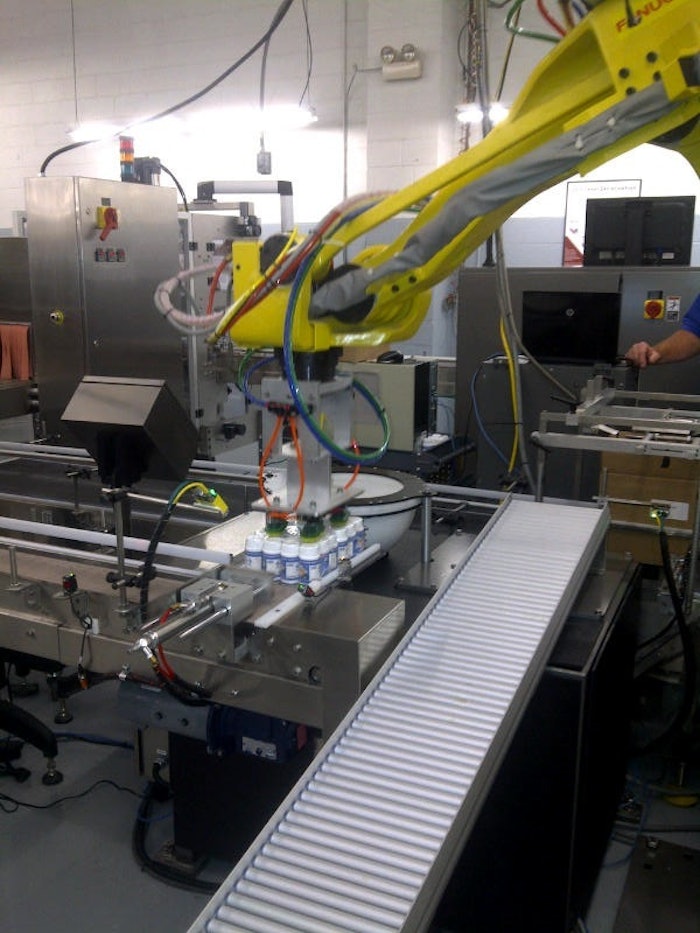 The November 7 portion of the November 6-8 PMMI meeting in King of Prussia, PA, also included a tour of packaging machinery builders All-Fill Inc. and Omega Design Corp. A highlight of the visit to Omega was a view of the in-plant demo of Omega’s new serialization solution (the robotic end of line portion is shown here). It was developed in response to the growing demand for track-and-trace functionality in the pharmaceutical manufacturing arena. Earlier in the day was a panel discussion of typical packaging machinery buyers. On the panel were

LIBRADO
• When aseptic packaging technology was introduced into the company culture, it was important to create a comfort level that would minimize operational difficulties.
• When the company supply chain was re-invented, two key requirements were a committed workforce and excellent communications.
• Sunny Delight’s goals when it comes to sustainable packaging can be pretty detailed, so packaging machinery suppliers had better make sure that the crating they use to ship new machines is designed with sustainability in mind.
• Packaging machinery suppliers had better be aware that whatever training they supply must take into account that in-plant demographics are not what they used to be; there is a sometimes profound generation gap between workers on their way out and those who will replace them.

YAKUBISON
• Merck’s admittedly ambitious goal is to supply 80% of the world’s population by 2015. Key challenges include figuring out a cold chain delivery solution that will help them achieve their goal and keeping costs down. But when it comes to keeping costs in check, how should Merck go about achieving that when many of the regions into which it wants to expand are places where people are lucky to make five dollars a day?
• Drugs developed by Merck to fight Rotavirus, a common cause of severe diarrhea among infants and young children, were developed for the U.S. Considering the fact that this disease is increasingly prevalent in Africa, Merck will need new formulations and new packaging, too. What packaging machinery suppliers will be able to help Merck tackle such a challenge?
• Legacy packaging equipment is widespread in Merck’s plants around the world. What packaging machinery suppliers will help Merck ensure that such equipment can continue to meet emerging regulatory requirements?
• While consumers in the West flock to generics as soon as patent expirations make generics possible, consumers in developing countries are big believers in brands and will pay a premium for them.
• As the demand for serialization grows, Merck needs a solution that works globally.
• Small runs are increasingly the norm, and lot sizes vary widely from region to region. In the Netherlands a run might be 30 minutes, in Indonesia it might be 3.5 hours, and in the U.S. it might be 8 hours. Packaging machinery suppliers need to be aware of these variants.

Industry experts outline the sustainability benefits of choosing digital printing, and how to convince brands to adopt the technology.
Melissa Griffen
Jun 22nd, 2022
More in Home