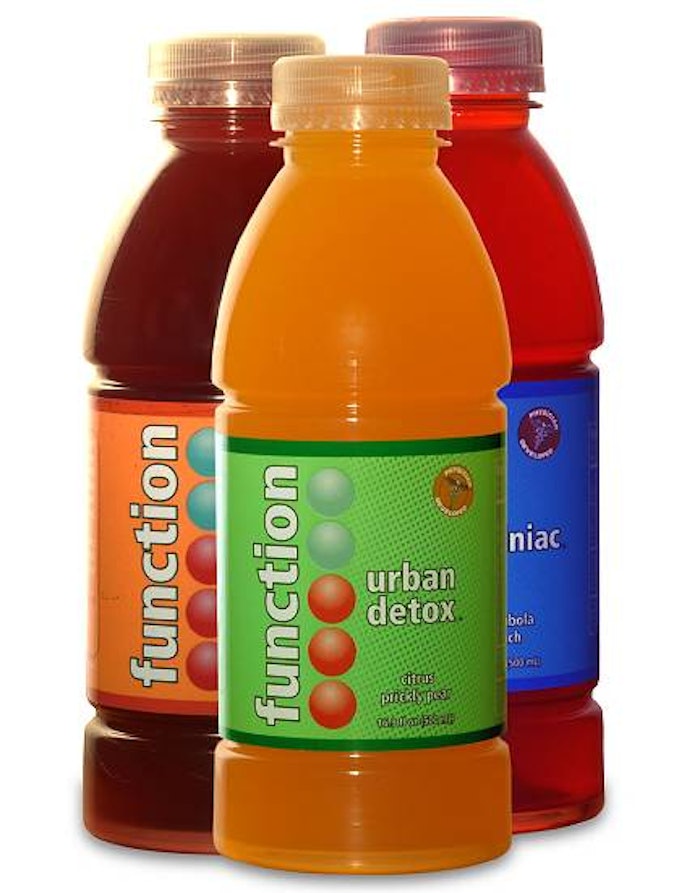 MD Drinks was breaking new ground, so selecting the right bottle was critical. “Because our drinks are cutting edge, we also wanted the bottle to symbolize that,” says Dr. Alex Hughes, a surgeon at UCLA Hospital and co-creator if the beverage. “First, we looked at silk screened glass bottles, but we decided that glass wasn’t really consistent with our ‘health drink’ message. Then we began to explore PET.”

The first iteration of the bottle was a standard hot-fill PET with panels. However, MD Drinks really wanted to “find a bottle that we could call our own.”

The PowerFlex™ bottle was brought to their attention by H.A. Rider, Watsonville, CA, one of the co-packers the company had been evaluating.

“H.A. Rider steered us to the PowerFlex™ bottle because they had been filling a long-neck version of it for Trinity Springs and were happy with its performance on the production line,” Dr. Hughes says.

MD Drinks selected Amcor’s other stock 16.9-ounce PowerFlex bottle—a domed-shoulder design with a 38mm finish. This allowed the company to launch quickly without incurring any additional tooling costs. Optional customization features, such as embossed logos or patterns, can be added in the future, if MD Drinks chooses.

PowerFlex™ features a vacuum-absorbing base. Previously, sidewall panels were necessary to absorb the distortion that occurs as a hot-filled beverage cools to room-temperature. (After the bottle is capped, the filled liquid cools, which, in turn, pulls an internal vacuum that must be dissipated structurally.)

Up until now, many beverage bottlers did not have a PET alternative that met both their hot-fill and their aesthetic requirements, thereby forcing their premium brands (juices, teas, isotonics, etc.) to stay the course in glass containers.

Additionally, the geometry of the straight wall design gives PowerFlex™ good top load characteristics. The straight wall has no points of stress concentration, which removes the potential of bending.

“Amcor was really helpful. They were available during all stages of the development,” Hughes says.

Function™ Drinks are currently distributed on the west coast and in the southwest, but distribution is quickly expanding nationwide. Additional varieties are also being developed.

Getting it Right the First Time – PCR Content Packaging