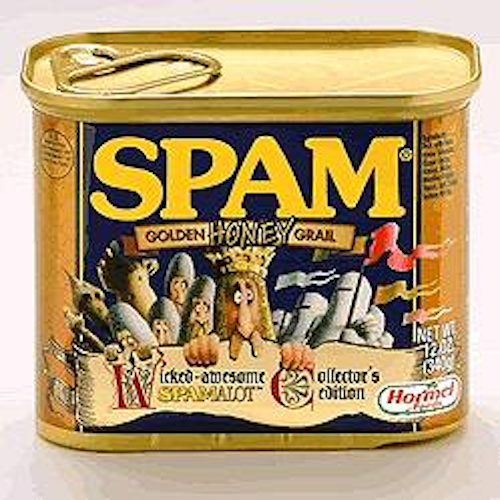 Now, it looks like Hormel Foods Corp., Austin, MN, gets the last laugh.

In honor of SPAMALOT, a new musical lovingly ripped off from the motion picture Monty Python and the Holy Grail, Hormel Foods is introducing a limited-edition flavor, Spam golden honey grail in a “SPAMALOT collector’s edition” can.

The Spam golden honey grail will be available in limited quantities as of February 2005 at select New York City retailers, including Broadway merchandise stores and the Shubert Theatre merchandise kiosks. The can features Spamalot graphics and characters from the new musical and instructions in “Spamalot-ese” on how to “cooketh” Spam.

“Spam products have been spoofed by the Monty Python comedy team for decades,” says Nick Meyer, senior product manager, Hormel Foods. “The brand is beloved by many, so we are pleased to offer this special collector’s-edition can and Spam golden honey grail to consumers.”

“Spam is the holy grail of canned meats,” says Monty Python’s Eric Idle. “We’re thrilled to dine on Spam golden honey grail at the round table of Spamalot.”

SPAMALOT will arrive on Broadway following a five-week World Premiere engagement at the Shubert Theatre in Chicago that concludes January 23, 2005.