What did we learn at Pack Expo Las Vegas?

There’s nothing like Pack Expo to take the pulse of packaging.

There’s nothing like Pack Expo to take the pulse of packaging. From booth conversations to press conferences to cocktail receptions and dinners, insights abound. Here are a few things that struck me.

• If you’re involved in the drug industry, get ready for serialization. Numerous exhibitors at Pack Expo were focused on finding ways to help drug makers meet the ePedigree legislation taking effect in California in 2015 (our Golden State friends say they really mean it this time!). Rooting out counterfeiting is widely recognized as the main driver here. But serialization technologies properly applied would also help drug makers address the fact that returns due to past-expiration dates currently cost the industry some $2 billion annually. The first-in/first-out practices made possible by giving every package a unique ID could help shrink this clearly unacceptable number.

• If you’re a machine builder, give some thought to expanding the range of products you make. Aagard, Sharp, and All-Fill were just a few of the exhibitors I encountered last month in Las Vegas that were showing equipment for which they have not been traditionally known. Consider bringing in a partner if need be.

• If you’re a brand manager, seek out better ways to manage package graphics “virtually.” You don’t have to travel to package converting plants around the world to make sure your folding cartons, for example, will match the required spec. Advanced communications and IT tools are available to let you manage graphic assets on your laptop from the comfort of your office. These tools were in evidence, by the way, not only at Pack Expo but also at the recent Graph Expo in Chicago.

• If you make end-of-line packaging equipment, listen carefully when consumer packaged goods companies talk about Retail-Ready Packaging. Take your cue from Pack Expo exhibitor Delkor. Of the eight new machines they produced in the past year or so, every machine addressed RRP in one way or another.

• Innovate, innovate, innovate. Two random examples drawn from Pack Expo include one from the OEM side and one from the end-user side. On the OEM side, Orion showed a new system that deploys robots to automatically apply corrugated corner boards that protect pallet loads. Hard to believe such a thing can be automated, but there it was in the Central Hall of Pack Expo Las Vegas. On the end-user side, U.S. Sugar Co. of Buffalo, NY, is the first to commercialize the Zipbox, a poly-coated paperboard carton incorporating an attached flexible film header containing a zipper reclosure feature. Says U.S. Sugar’s president and CEO William McDaniel, “Its novelty was compelling because we knew it would resonate with retailers as an innovative new package format.”

• U.S. Manufacturing doesn’t have to get derailed by the meltdown currently afflicting today’s political and financial circles. At one Pack Expo booth after another, I heard machine builders, technology providers, and packaging material converters tell me that 2011 has been a terrific year. But to read today’s headlines—consumed as they are with the damage our economy is suffering thanks to greedy bankers and ineffective politicians—you’d think such a thing couldn’t be possible. I guess it’s all about staying focused.

• Speaking of being focused, how about PMMI racking up some record numbers at this year’s Pack Expo Las Vegas? Net square footage was up nearly 20% and attendees up 15% over 2009. It bodes well for Pack Expo International in Chicago, so mark your calendars for October 28-31, 2012. You’ll also want to see all the Pack Expo Las Vegas show coverage we posted recently: www.packworld.com/packexpo-2011/.

• Wanted: Higher education institutions that understand the importance of mechatronics. As Rick Schneider, president of Schneider Packaging Equipment, put it to blogger Keith Campbell at Pack Expo, “A school that offered a Bachelor’s Degree in Mechatronics would be ideal.” 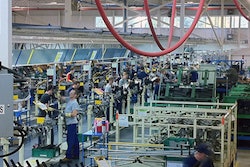 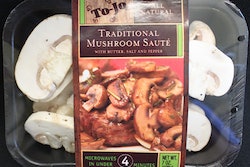 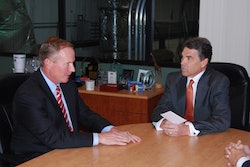