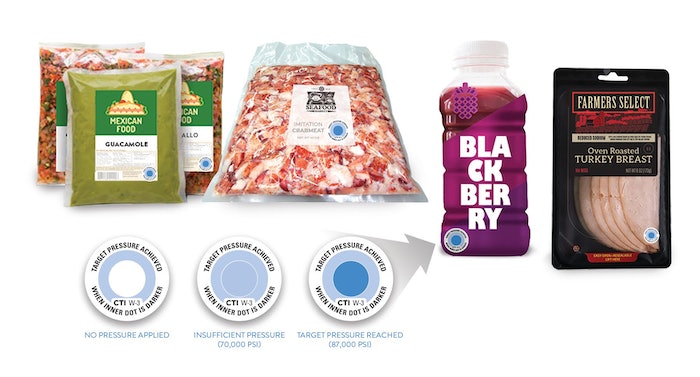 Chromatic Technologies Inc. (CTI), a producer of thermochromic ink, has launched BlindSpotz, a high pressure processing (HPP) verification technology that can identify individual packages that may have failed during the HPP process.

More and more food and beverage manufacturers are turning to high pressure processing (HPP) as a way to destroy harmful bacteria in food and beverages while maintaining their products’ natural flavor and keeping them free of preservatives. But one of the drawbacks in the HPP process has been its inability to inspect individual packages to identify where the HPP process may not have exerted enough pressure to kill pathogens in the products, forcing processors to eliminate an entire run of prepared foods or beverages following the vessel exposure to the HPP process. That can result in significant economic losses. CTI says its latest technology will address that inefficiency in the traditional HPP process.

CTI has developed its second-generation of printable BlindSpotz HPP verification technology. At the individual unit level, the CTI enhancements can differentiate between packages processed at 70,000 psi, 80,000 psi and 87,000 psi. The technology also identifies short cycles, such as packages at 87,000 psi for less than one minute.

A typical protein or juice product is processed through HPP at 87,000 psi for three minutes. Failure to hit that target pressure results in substantial risk of harmful contamination.

BlindSpotz HPP verification technology prints a clear message/image and then a blue color appears when the proper target is reached. To make it easy to use in a production environment, a reference color is used for comparison. If the HPP verification ink is lighter than the reference color, the package is easily identified as “failed” in the HPP process. For more rigorous or automated systems, the precision of a vision system is used to measure the color to ensure an objective analysis instead of human eyes.

“Customers pushed us hard for a smart, affordable technology that could validate the initiation of the kill step of the most dangerous bacteria during the HPP process. This makes it easy to identify at the individual package level if something failed,” says Lyle Small, CTI’s founder and chief executive officer. “An HPP failure is a safety hand grenade waiting to explode for brands and retailers if there isn’t a simple way to identify dangerous product. HPP machines are very smart at detecting problems, but they don’t provide the inspection of individual packages.”

There are three ways to use the HPP validation technology: (1) An HPP badge can be used in every tote (or basket) of packages to confirm success and retained for hazard analysis and critical control oint (HACCP) and Food Safety Modernization Act (FSMA) records, and (2) stickers can be applied to individual packages and (3) printed on the package as part of the existing printing process.

“Hydrofresh has been an early tester of CTI’s BlindSpotz HPP validation technology. We will now offer our customers the option of validation tote badges as an added layer of quality and safety,” states Don Klausing, president of Hydrofresh, an HPP toller from Delphos, Ohio,  that makes the technology available to its customers.

“The difference between good quality and great service is providing HPP validation of quality and safety at the individual package or tote level. Hydrofresh seeks to be the best HPP toller in the business by providing total transparency to our customers,” Klausing adds.

The BlindSpotz technology is deployed across the protein, juice and sauce sectors overseas in Chile, France, Spain, Mexico as well as within the United States.