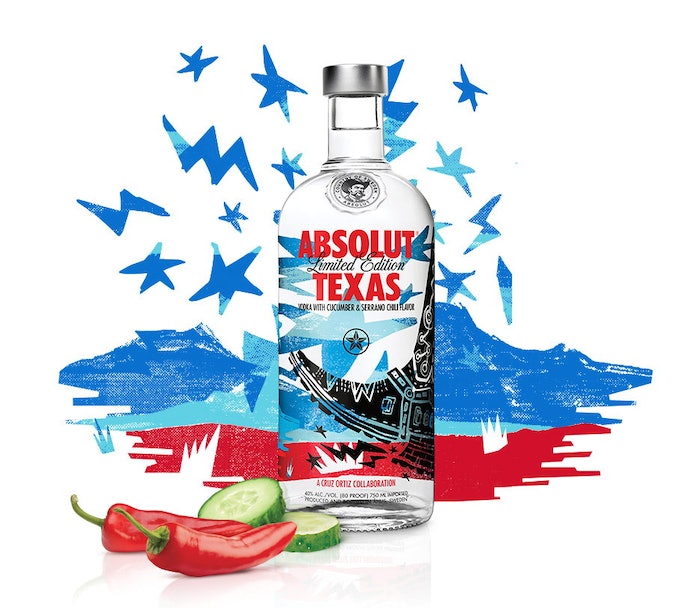 Absolut Vodka has unveiled its eighth and latest addition to the Absolut Limited Editions portfolio with the launch of Absolut Texas—the brand's first and only state-inspired flavor. According to Absolut, internationally renowned San Antonio-based artist Cruz Ortiz designed the Absolut Texas bottle as a modern take on classic Texas iconography.

The taste of Absolut Texas is said to be rich and smooth with notes of fresh cucumber, and a warm spicy character inspired by the flavors of Southwestern cuisine. It is advertised as pairing well with a myriad of ingredients, such as cranberry, cilantro, and grapefruit soda.

"From the unique Southwestern flavor to the one-of-a-kind bottle design, Absolut Texas is our biggest and boldest Limited Edition flavor to-date," says Afdhel Aziz, Brand Director, Absolut Vodka, Pernod Ricard USA. "Absolut Texas was truly designed as a celebration of all the best that contemporary Texas has to offer."

Cruz's bottle design features a modern spin on iconic Texas imagery, including a "cosmic caballero" cowboy boot against a stylized Texas landscape and his take on the Texas Star. The bottle also features Absolut founder Lars Olsson Smith wearing a cowboy hat, marking only the second time in the brand's history in which Smith's logo has been altered.

Absolut Texas is now available in 750-mL bottles with a suggested retail price of $19.99.