With sales of nightcrawlers rising steadily, top management at DMF Bait in Waterford Township, MI, knew that an auger filling upgrade for the dirt-filling part of the business was essential.

They also knew exactly who the source would be: AMS Filling Systems. According to Dan Beaudoin, one of the principals at DMF Bait, no RFQ was called for.

“When we realized we needed a boost in output, we didn’t even bid it out,” says Beaudoin. “The AMS auger filler we’ve had since 1997 is still running well today. And AMS has really backed it up over all those years.”

DMF’s paperboard cups of worms are sold in 49 states. Among the retailers that carry them are Walmart, Kmart, and Dick’s Sporting Goods. Until about 18 months ago, the firm relied on one twin-head filler. But February of 2012 brought the upgrade: a new filling system with three twin-head AMS auger fillers mounted over a dual-lane conveying system.

Rockwell controls, a Rockwell HMI screen, the ability to pick a production run from a menu on that screen, and the ability to quickly and conveniently switch from one formula to another—these are all new functionalities that the old AMS filler didn’t have. Beaudoin is pleased to have them all.

“The texture of the dirt medium being filled is challenging,” says Beaudoin. “But the AMS equipment handles it with great accuracy. The filling is volumetric, so it’s based on auger rotations. It’s good to be able to adjust the auger rotations at the touch screen, since the amount of space occupied by 18 nightcrawlers can vary considerably depending on the size of the nightcrawler at any point in the production.”

Press-on Paper lids are applied by equipment from MGS. It picks individual lids from a magazine and places them on the cups. The other piece of equipment rounding out the line is an ink-jet coder from Markem-Imaje that puts date and lot code on the sidewall of each cup. The cups are then manually loaded into EPS foam coolers that serve as secondary packages for refrigerated warehousing and distribution. 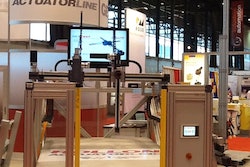