Consumers like fish, and they’ve read about the health benefits associated with having more fish in their diet. Now Orca Bay Seafoods is making fish at home easy. 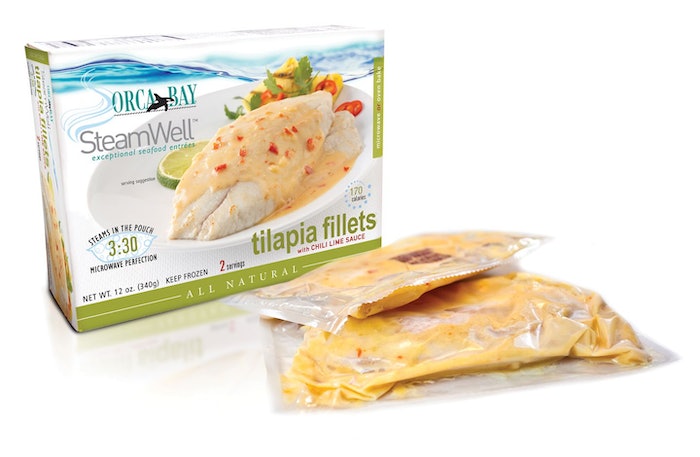 Nice carton graphics are the finishing touch on these frozen portions of raw fish in ovenable film.

Orca Bay Seafoods of Renton, WA, is re-launching its SteamWell line of frozen seafood entrees. This value-added concept lets consumers purchase high-quality seafood items at a retail outlet, store the items in their home freezer, and cook from raw in the conventional or microwave oven inside the original vacuum packaging.

Simplifying the cooking and cleanup process is what the SteamWell package is all about. Eliminating well-documented consumer uncertainty about cooking fish is also a driver. The ability for consumers to cook seafood from raw inside ovenable packaging represents a whole new opportunity for food manufacturers to penetrate the significant population segment that is focused on convenience.

Cryovac Oven Ease from Sealed Air is the material used by Orca Bay for the 6-oz net-weight vacuum packages now in production. Each individual pack holds a 4-oz fillet and 2 oz of sauce. Two of these six-oz vacuum packages are enclosed in a folding carton that retails for $8 to $10. Varieties include Wild Sockeye Salmon with Tuscan Herb Sauce, Tilapia Fillets with Chilli Lime Sauce, and Swai Fillets with Sweet Chilli Agave.

“Using OvenEase for seafood enables seafood processors to remove the guesswork from home cooking by providing them the opportunity to develop products that can be seasoned or marinated prior to packaging, with simple preparation instructions included on the exterior package,” says Don Smith, director of marketing for poultry and seafood at Sealed Air’s Cryovac brand.

Helping to ensure that the package delivers on the convenience factor as advertised is the seal reliability that comes with this material, a critical factor in eliminating messy oven-splatter. “Our technology makes sure the materials bond tight, with seals that retain their integrity throughout cooking,” says Smith. “This is a big concern for consumers.”

According to Roger Fickenscher, director of product development at Orca Bay, the SteamWell line was first launched in the second half of 2010 with an ovenable film from a different supplier. “We were putting one six-ounce fillet plus 2 oz of sauce in a vacuum pack and then putting just that single eight-ounce net-weight pack into the folding carton,” says Fickenscher.

Distribution of the SteamWell items was pretty limited. But the concept did manage to catch the attention of a major coop buyer, says Fickenscher. “They tested our packages pretty extensively and found too many ‘blowouts’ in the oven when the fish was being cooked,” says Fickenscher. “They’d also been testing the Cryovac OvenEase material, and they told us that if we’d switch to vacuum packaging film made from that material, they’d buy from us in very attractive volumes. So we made the switch, and in the process we also switched to the two pouches per carton format.”

Both OvenEase forming web and lidding material are shipped to Orca Bay in rollstock. Cryovac’s Smith describes the materials as multilayer coextrusions in which nylon is the principal component.

“Two different nylons are used,” says Smith. “The sealant layer is a nylon that melts and bonds at a different temperature than the outer nylon. So we can guarantee a great seal of web to web on traditional thermoform/seal equipment, but the nylon that isn’t the sealant layer can withstand the heat of a conventional oven.”

Both webs are mounted on a Multisource remanufactured thermoform/seal system. The forming web is thermoformed six per cycle in a two-across/three-in-the-machine-direction format. An operator places a frozen fillet into a formed cavity, and then a depositor from Hinds Bock places 2 oz of sauce on top of each filet. The depositor traverses across the fish-filled cavities to perform its task. The filled thermoformed pockets then are conveyed into the evacuation/lid sealing chamber where the lidding material is heat sealed to the forming web. A date code is also imprinted onto the lidding material just before it’s sealed to the forming web.

The Multisource machine automatically cuts sealed pouches from the continuous web and the pouches are then run through an ADCO cartoner, two pouches per carton. A date code is ink-jet imprinted on each carton, and the cartons are then case packed manually. The .018 SUS cartons, printed offset in five colors plus an aqueous coating, are supplied by Rose City Packaging.

Carton copy on the front panel publicizes the fact that the fish can be prepared in the microwave oven in 31/2 minutes. But Fickenscher says that having packaging materials that also allow preparation in the conventional oven is important.

“We provide a package that can be cooked in either the microwave or the conventional oven because we’ve found that with both customers and retailers there remains a certain ambivalence about microwaving fish,” says Fickenscher. “There is a subset of the population that still prefers conventional cooking techniques, and this approach provides a restaurant-quality product to fill that niche.”