A PET bottle and shrink-sleeve label help start-up company DTK launch a relief drink for “the day after.”

AH+ (pronounced Ahh) is the brainchild of Tom Pemble, CEO of Peoria, IL-based DTK, LLC. Pemble developed the idea while in graduate school at in . “I had a professor who shared with me just what a body needed to prepare for—and recover from—a night on the town. Some friends and I found a company to mix the ingredients and this product was born. Then we named it, came up with the three flavors, got some investors, and began a whirlwind campaign to get it on the market.”

Started less than a year ago, DTK is marketing single bottles for $1.69 - $1.79, and four-packs for $6. AH+ is sold in grocery and convenience stores, gas stations, and bars. Shelf life is one year for the product, which was test-marketed in . “Currently, AH+ is available in , with our largest market,” says Charlie Dimpfl, DTK’s general manager. “We go as far north as . It’s sold in , , , , and in .” Plans are to eventually sell AH+ nationwide.

“It has vitamins B12, B6, and B3, the main components you lose when you do drink,” explains Dimpfl. AH+ contains a proprietary mixture of vitamins, electrolytes, minerals, and caffeine. “One bottle also gives you 100-percent of the daily allowance of Vitamin C, and it has zero calories, zero carbs, and zero sugar,” adds Dimpfl. “It’s a healthy alternative to flavored waters and sports drinks.”

A press release issued by the company says AH+ “hydro-plenishes” the body, saying that “no other drink on the market matches the extensive scientific research done to help relieve a hangover.”

“We have figured out that it is not just for hangovers,” adds Pemble. “It can also help you after being jet-lagged, working out, or wherever else you feel you need to replenish your body.”

Filling is done in , by private-label water bottler Northern Falls (www.northernfalls.com). No new packaging equipment was required for this job.

At this point, DTK has empty bottles sent to Seal-It (www.sealitinc.com) for application of a 2-mil PVC wraparound shrink label. Printed flexo in six colors, the windowed label allows the consumer to see the Bedtime Berry, Last Call Lemon, or Goodnight Grape flavors inside. A “band-aid” plus-sign-shaped graphic is printed on the label to imply that the drink is a “cure-all” for hangovers, or from jet lag. A 28-mm-wide, injection-molded polypropylene closure from Alcoa (www.alcoa.com) tops the bottle.

Dimpfl says the start-up firm is happy with the inroads AH+ has made in terms of its distribution. Pemble says the company is exploring ways to streamline its labeling and filling process and to expand distribution. 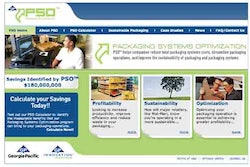 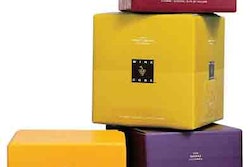