Cheese wrapping on the double (sidebar)

In late '94, Nu-Tek Foods purchased a PEL high-resolution large-character ink-jet case coding system from Diagraph (St. Louis, MO), its first from that vendor. It uses the PEL to print cases of individually wrapped slices (IWS) of cheese produced on Nu-Tek's new Kustner hot-pack machine. The PEL prints standard information such as item number, date, time, and description. A little less than a year ago, due to demand from its customers, Nu-Tek used the high-resolution capabilities of the PEL coders to add a bar code on its corrugated cases. Nu-Tek's customers can scan the bar code for inventory control purposes. "The PELs have been very dependable," says John Behm, director of engineering. The reliability of the PEL coder has led the company to standardize on Diagraph ink-jet coders, such as the Linx 6200 coders used on cheese slices. For cases of product packed on Nu-Tek's old IWS packaging machine (now dedicated to one customer), the company installed in January two of Diagraph's new Model I.V./700 large-character case coders. "On the old line," explains Behm, "all the customer required was a time and an item number on the outside of the box." Since a bar code wasn't required, Nu-Tek found that the I.V./700 was an economical choice for basic case coding. That model costs about a fifth that of high-resolution coders. Since Nu-Tek manufactures a variety of processed cheese products in glass jars, plastic squeeze bottles and loaves, it needed a small-character coder portable enough to be moved to different packaging lines as needed. A Linx 4200 small-character coder permitted just such flexibilty. "We are able to wheel the unit to four or five production lines," says Behm. It mainly prints a date code, but it is sometimes also used to print product-specific messages, such as "refrigerate before opening" on jars and squeeze bottles. Several features common to all of the coders benefit Nu-Tek. Changing codes is easy using the portable terminals to enter new information or to call up information from memory. "They're user-friendly," confirms Behm. "You can call up the new information in a couple of minutes." Changing ink supplies is also uncomplicated, says Behm. Each of the coders can be changed on the fly, without disrupting operation. "Of course, a reservoir maintains the coding operation while we just change the can." 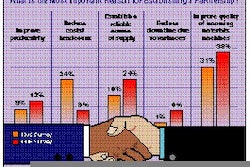 Vendor partnerships on the rise 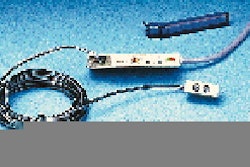 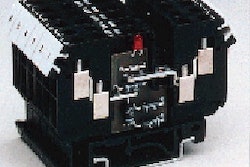