Blow-molding not just for bottles anymore 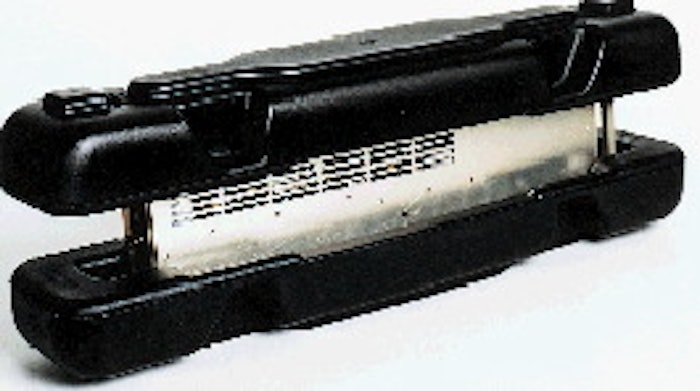 Supplied by Intepac (Toronto, Ontario, Canada), the AirfloPac® cushions disperse shock energy from one chamber to another, minimizing the impact on the product. Motorola switched to the cushions for protecting its 12-lb cellular phone transceivers after using top and bottom trays made of molded polypropylene foam. "We ship our products internationally, and a lot of countries don't accept foam" as a recyclable packaging material, says Rash Patel, manufacturing engineer. Motorola found that LDPE, on the other hand, is more widely accepted from a recycling standpoint, according to Patel. The packaging passed a battery of rigorous tests before Motorola would approve it. It's been in use at Motorola's Cellular Infrastructure Group in Arlington Heights, IL, for close to a year. The transceivers it protects are worth from $3ꯠ to $5ꯠ, depending on how they're configured. Other Motorola plants at home and abroad are looking at adopting the packaging. Motorola has entered the package into this year's Worldstar competition, whose winners were slated to be announced this month. The cushion has already won the 3M Eco-Efficiency Ameristar award at the recent WestPack show.

Rondo-Pak expanded the capacity at its primary facilities in Camden, N.J. and San Juan, Puerto Rico, with the addition of die-cutting and folder-gluer machinery.
Rondo-Pak, Inc.
Nov 9th, 2020

The PFAS story keeps developing, and isn’t over yet.
Eric Greenberg
Aug 25th, 2020

As a follow up to the open meeting held in June, the ISTA Pharma Committee will host two roundtable discussions in August to discuss in-depth the top two topics of interest from the industry survey.
International Safe Transit Association (ISTA)
Aug 5th, 2020

TEUFELBERGER developed a new strapping solution especially for the printing and packaging industry, as well as the mailing and logistics industry. It is not only easy to operate, easy on the environment but also easy to handle.
TEUFELBERGER Fiber Rope Co.
Jul 1st, 2020

Romanian lager Albacher doesn't mention the pandemic specifically, but the timing of its new foil lidding, which adds billboard space and ensures a clean beer can surface, is fortuitous considering an increasingly safety-conscious consumer base.
Matt Reynolds
Jun 29th, 2020
More in Protective/transport packaging

Jenny Craig Trims the Excess from its Meal Delivery Packaging

The GCube Shield technology from Greif is an advanced barrier protection technology used in its intermediate bulk containers (IBCs) to reduce the permeation of gases through the polyethylene.
Greif, Inc.
Aug 22nd, 2019
Protective/transport packaging

Slippery malt bags and heavy totes were causing issues with load instability and product damage. A new combination of adhesive and stretch film solved these issues with an added cost savings for the company.
Kim Overstreet
Jul 3rd, 2019

E-commerce meat company Crowd Cow ditches the EPS insulation for a shipping material that is home-compostable and meltable, and can be safely disintegrated in water.
Anne Marie Mohan
Apr 27th, 2019