Winners of the 1994 AmeriStar Package awards were announced November 12 at a reception held in conjunction with Pack Expo in Chicago. Sponsored by the Herndon, VA-based Institute of Packaging Professionals, recipients in the Industrial Category included a multi-compartment paperboard container for pressure transmitters and a polycarbonate suspension system for silicon wafers.

Winning both the Gold Star and Environmental awards is a multi-compartment paperboard package (left) for the Model 1151 pressure transmitter and associated three-valve manifold made by Rosemount Inc., Chanhassen, MN. The transmitter monitors the flow of liquid or gas going through piping systems used in food, beverage, chemical, oil and other industries. Typically packaged in plastic or multiple materials, Rosemount's product is packaged in 100% recycled paperboard. "Rosemount has a global customer base," says packaging coordinator Bobbie McDaniel. "I chose paperboard for the ease of recycling worldwide." Rosemount introduced the package, supplied by Specor Systems (Eau Claire, WI), in November of 1992. The outer carton is a 275#-test F-flute corrugated offset-printed by Specor in one color. Graphics were designed in-house. Inside, double-walled 350#-test B-flute corrugated and 1 1/2" thick honeycomb paperboard are die-cut and glued together to form a package bottom. The mating top is made the same way, and the transmitter fits snugly between the two. A cloth drawstring bag holds the accompanying mounting kit. The Silver Star award went to Empak (Colorado Springs, CO) for a returnable and reusable silicon wafer shipping container (below). The Crystalpak(TM) wafer shipping system is for transport of silicon during its manufacturing into chips. Empty boxes are shipped to silicon "growers," who manufacture silicon wafers and then ship them to companies like Motorola, IBM and Intel, where they are processed into silicon chips. Conventional containers typically used by silicon growers are made of polypropylene, and usually they're reground or thrown away when they reach the chip maker since they do not have enough structural integrity to allow reuse. The Crystalpak, however, is made of more durable polycarbonate, so empty containers are shipped back to Empak or the grower. After top and bottom cushioning, made of a semi-rigid thermoplastic elastomer, is removed and replaced, the container can be reused up to five times, or until it is too worn for reuse. In addition to structural integrity, the injection-molded PC provides scratch-resistance and transparency. It comprises five parts: a cassette that holds 25 silicon wafers, a base on which the cassette sits, the top, the bottom, and the outer cover. A gasket, also made of a semi-rigid thermoplastic elastomer, fits between the cover and base, forming a seal and eliminating the need for taping. The entire container measures 1 x 1 x 1', and although it costs about three times more than the PP version it replaces, its reusability more than cancels out any net upcharge. 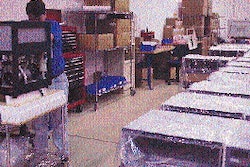