From its plant-based, flash-frozen meals that minimize food waste to its use of a new molded pulp shipper with starch-based insulation, Raised Real works to preserve resources for the next generation. 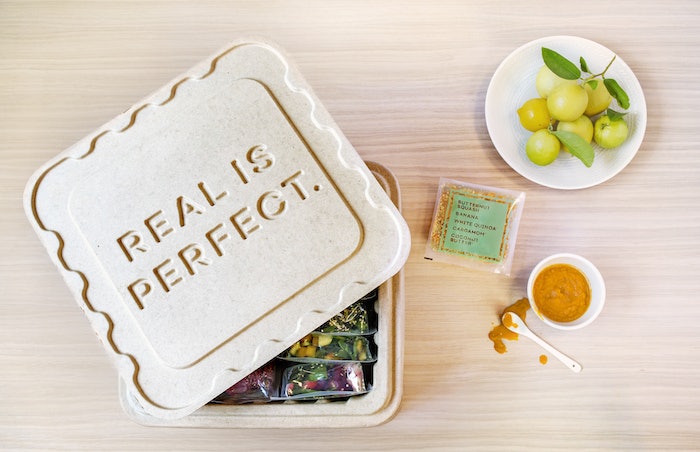 The cooler and lid are manufactured via a proprietary process using 100% old corrugated containers.

Home-delivered meal kits are a fast-growing market, representing $1.5 billion as of mid-2017, according to Packaged Facts. They offer a number of advantages valued by consumers, especially younger ones: convenience, reduced food waste, variety, and—in many cases—fresh, healthy food options. One company that has hit the sweet spot in all these areas, as well as provides packaging that environmentally-conscious consumers can feel good about, is San Francisco-based Raised Real. Raised Real is a subscription-based service that delivers flash-frozen, organic, plant-based meals for babies six months and older in 100% recyclable packaging, including a molded pulp shipper with starch-based insulation.

According to Raised Real Co-founder and CFO Steve Kontz, the company was founded to help time-strapped parents who have a desire to feed their babies nutritious, whole foods to “do mealtime better.” Everything about Raised Real’s business—including how its products are prepared, the way in which it sells the meals to consumers, and its packaging and (lack of) collateral materials—is done in a way that addresses environmental sustainability.

“From a company standpoint, it makes so much sense because our goal is to give kids the best start possible, and it’s those kids we are feeding right now who will eventually inherit the problems we create environmentally,” says Kontz. “If we aren’t also doing our part to make the world they’re going to inherit better, then we’re not doing everything we should be.”

Raised Real flash-freezes its whole food to keep the nutrients in and to give consumers a choice as to how to serve the foods. For example, meals can be pureed for an infant, or mashed or served as finger food for an older child. Subscribers receive 20 curated meals every two weeks, with each meal individually packaged in a recyclable polyethylene bag.

Kontz says Raised Real chose the meal kit route rather than selling its products at retail for several reasons. Among them were the growing popularity of the meal kit market as well as the convenience direct-to-consumer provides working parents who lack the time to shop and prepare meals. Equally important is the reduction in food waste. “When you go into retail, you have to move a lot of inventory to a lot of different locations, and not all of that is going to get moved through,” he says.

Raised Real’s pre-portioned meals also reduce food waste versus consumers making their own fresh baby food, where they may need to buy more produce than they can actually use. “Meal kits have the advantage of portioning exactly what the consumer is going to need and cutting down on the biggest source of food waste in America, which is post-consumer purchase,” says Kontz.

When it came to designing its shipping cases and insulation, Raised Real did not even consider petroleum-based expanded polystyrene, because it cannot be recycled in most places. Instead, the company initially chose an RSC fitted with insulated panels made from a compostable cotton material covered with a plastic film. But, says Kontz, it soon realized that recycling is the only behavior that consumers are doing consistently. “We’re in San Francisco where there are mandated compost bins in every home and apartment,” he says, “and I can tell you that even for our San Francisco customers, probably fewer than 50 percent were composting—and this is in a place where they make it as easy to compost as possible.”

Perusing PACK EXPO Las Vegas in 2017, Raised Real came upon a new packaging system that could meet its goals for recyclability while providing the same temperature control as an EPS container. The Vericooler III from Vericool is a molded-pulp cooler fitted with compostable, recyclable, starch-based insulation. As Darrell Jobe, CEO of Vericool, explains, the tongue-and-groove design of the molded container and lid reduces thermal loss at the edges of the container by 80% versus an RSC with insulated panels, meaning less coolant is required—up to 50% in some cases. Less coolant also means a lower-weight package.

The cooler and lid are manufactured via a proprietary process from Vericool using 100% old corrugated containers (OCC) embedded with a moisture barrier. The Raised Real box is then molded with the copy, “Real is Perfect.” Inside the cooler is the starch-based insulation, which meets US ASTM D6400 and Home compost standards and can be dissolved in water. Both the cooler and insulation are 100% curbside-recyclable and compostable, or “Recyclapostable™,” as Jobe says. The cooler is shipped in a recyclable corrugated case.

The Vericooler III keeps Raised Real’s meals frozen for more than 40 hours for shipments that are a one-day’s distance, and for 60 hours for a distance of over two days, with the addition of more or less dry ice.

In keeping with its commitment to use only what’s needed, Raised Real prints information on how to dispose of the cooler and insulation as well as information on why the company is using this packaging onto the outside RSC that holds the Vericooler III. “It goes back to sustainability,” says Benish Shah, Vice President of Marketing for Raised Real. “For everything that goes into our box in terms of collateral, we make sure there is more than a one-time use for it.”

Raised Real has signed a multi-year, multimillion-dollar contract with Vericool, launching its first meal kit in the Vericooler III in January 2018. Says Shah, response to the new packaging has been very positive, especially on social media. “To some degree it’s been a surprise to me because I’ve never seen people so excited about packaging, but our parents really are,” she says.