Anne Marie Mohan
3,500 PANELS. This rendering of the new Smithsonian museum, expected to be complete in 2015, calls for 3,500 bronze-style architectural panels for the façade, each of which needs to be transported 2,500 miles from the manufacturing to the assembly site.

The Smithsonian Institution, with its 19 museums, nine research centers, and one zoo, is one of the most famous museums in the world. It is definitely the largest, holding more than 137 million items and hosting more than 30 million visitors annually.

Being selected to provide 3,500 intricately cut bronze-looking exterior panels that will be the signature motif for the newest building being added to this iconic institution—the National Museum of African American History and Culture—brings with it tremendous honor and prestige. It also brings great responsibility, not only to create each panel to exact standards, but also to ensure they are all delivered in pristine condition.

Element, a Seattle-based company that specializes in custom architectural metalwork, knew they were up to the job of providing the panels, but they were faced with the challenge of transporting the panels from the paint facility in Portland, OR, to the contractor’s assembly facility in Cleveland, where they would be hung onto the carrier frames that would be affixed to the museum building.

After all, each aluminum panel weighs about 135 pounds, and the specially painted custom artisan finish had to be protected from damage. The packing and shipping of the panels was going to be an art in and of itself—an art that would take the collaboration of four companies: Element, Crate Tech Inc., WCP Solutions, and Laminations.

Building a national treasure
The Smithsonian National Museum of African American History and Culture was established in 2003 by an Act of Congress, making it the 19th Smithsonian Institution museum. Located on a five-acre tract of land adjacent to the Washington Monument in Washington, DC, it is the only national museum devoted exclusively to the documentation of African American life, art, history, and culture. Construction began in 2012 and is expected to be complete in 2015.

Helping establish the museum’s distinctiveness will be the architectural panels from Element. The 322,600-sq-ft facility will look unlike any other structure on the Mall. The design, which will visually define the museum, called for a bronze-panel facade to represent traditional African architecture using modern materials.

Element manufactured the panels from cast aluminum, a metal that is much less costly and three-times less dense than bronze. While still tipping the scales at about 135 pounds apiece, each 42 x 63 x 13∕8-in. panel is significantly lighter than if made from bronze, which was an important consideration to the overall cost of the building’s construction.

To maintain the original bronze-panel concept, a custom paint finish that took more than a year to perfect was developed and applied. Made from Kynar paints (which are actually thin layers of plastic film containing resin, binder, and pigments), the finish consists of multiple coats, including base primers, a black undercoat, a metallic color coat, and a tinted clear top coat.

“Handling and transporting these panels was a big concern for us,” says Geoff Rossi, Project Manager for Element. “We knew that if we did not secure them properly, even the packaging itself could damage the panels. The friction of the packaging rubbing against the panels from the vibration while the truck drives across the country could be enough to damage the panels. It would act just like sandpaper and scuff the paint. We had to develop a solution that we knew would not harm the panels.”

Element also had to consider cost. At 42 in. wide, two panels could fit across a semi tractor-trailer. But that did not leave much space for the crating. Working closely with Justin Nelson at custom crating and packaging supply company Crate Tech, Element’s team was able to design a specialized crate that maximized both the protection of the panels and the payload in the trailer. But with each crate having an interior dimension of 43.5 x 67.5 x 37 in., that left precious little space on each side of the panels for the packaging, which greatly limited the types of packaging that could be used.

Rossi says the first idea was to place foam between the panels. However, the weight of the panels compressed the foam too much, rendering it ineffective. With 20 panels per crate, the bottom panel and foam would have to carry more than 2,500 pounds.

So Nelson turned to his contact Dan Westberg at WCP Solutions, Crate Tech’s wholesale distributor of packaging supplies. Having had success with Laminations’ products in the past, Westberg called on his contact there, account manager Ray Rosales.

Protection and identification
“Element was looking for a lightweight, yet protective framework that would not only withstand the weight of the panels and protect the paint, but also identify their materials,” says Rosales. “After reviewing their situation, Dan and I were confident our NotchBoard product would give them the strength and security they needed. We quickly designed a frame by combining two pieces of NotchBoard per side, and after a couple of minor alterations, we had our solution.”

NotchBoard is Laminations’ VBoard® laminated paperboard product with precise die-cut notches and scores that permit it to be hand-folded quickly into 90-deg, one-piece edge and corner protectors. It is manufactured in lengths from 17 to 288 in., with calipers from 0.140 to 0.225 in. Custom leg lengths are available. For this application, two pieces of NotchBoard were combined to create a channel for the edge of each panel.

Laminations also offers one- and two-color custom printing on its NotchBoard. For this job, Element requested a two-color printing of its logo.

The first step in securing each panel was to protect it with a vinyl sheet on both the front and back. The NotchBoard pieces were then placed over the ends of the panel and folded at the corners so they could meet at the midpoint at the top and bottom. Finally, the NotchBoard-encased panels were stretch-wrapped lengthwise and widthwise to keep everything in place.

The crating of the panels consisted of stacking them 20 high on a specially designed pallet that served as the crate bottom. A floating lid was then compression-banded to the pallet to further diminish any chance of the panels moving during transit. Removable side panels completed the crate.

“Another significant benefit we found with the NotchBoard edge protectors is that the packing stays with each panel all the way to install,” says Rossi. “This is important because once the panels get delivered and the crates get dismantled, each panel is still individually packaged. This greatly reduces the chances for damage as they are carried around the assembly facility.”

Teamwork is the key
With a total of 3,500 panels needed to complete the project, 175 crates have to be created. And with 10 crates being delivered on each semi tractor-trailer load, it will take 18 trips—each one covering 2,500 miles—to deliver all the panels. Every bump, crack, and pothole along the way creates an opportunity for damage to occur. Rossi says that teamwork has been essential to success.

So far the outcome of that teamwork has been perfect, as none of the panels has been damaged during shipping. While several more shipments need to be delivered over the coming months, Rossi is confident there won’t be any problems: “Teamwork is very important to us at Element, and this project is a great example of how teamwork pays off. Everyone was great to work with. Jason at Crate Tech did an excellent job of understanding the problem and bringing the right players to the table, and Dan at WCP Solutions and Ray and the Laminations team were quick to deliver samples for different mock-ups we wanted to try. Everyone was very resourceful and helpful.”

Once the last panel gets delivered, the project will be out of the team’s hands. But it’s a safe bet everyone’s interest level will remain high. The project is scheduled for completion in February 2015 when the last of the panels is attached to the building.

“It’ll be exciting to see the culmination of all our work and see the vision of these panels achieved,” Rossi concludes. 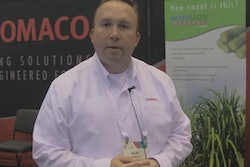 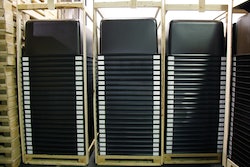 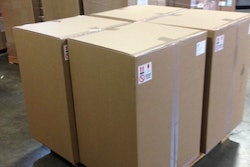 How medical tech manufacturers save by outsourcing warehousing