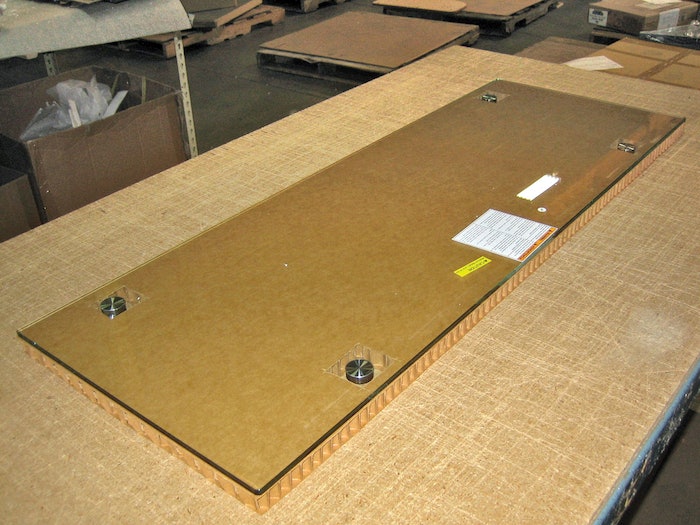 1. Glass panel is placed on 1-in. piece of honeycomb, cut slightly larger than the glass.

When the product you’re shipping is panels of replacement glass for entertainment centers, TV stands, and desks, and one out of six panels is breaking in transit, that’s a problem that needs to be solved.

Z-Line Designs, a San Ramon, CA-based manufacturer of home office and home entertainment furniture, sells its products through big box stores in North America. It also ships the replacement glass panels for its products directly from a warehouse in Livermore, CA, to customers throughout the U.S. and Canada using a leading shipping company.

When Jim Robinson, director of warehouse operations and customer service in Livermore, started experiencing a sudden hike in breakage rates—as high as 16% at one point—something had to be done.

Thanks to some detective work by Robinson, the problem was finally identified. Working with edge protection vendor Laminations® and with distributor Landsberg Co., a division of Amcor Packaging Distribution, Robinson has been able to bring that 16% breakage rate to zero, using a custom combination of UChannel® three-sided edge protectors and honeycomb.

Z-Line used to ship its replacement glass pieces packed in expanded polystyrene foam inside corrugated boxes. That packaging combination had been passing the shipper’s drop tests, which require the pieces to survive 10 drops.

Then the breakage rate began to creep up, peaking in February 2011 at 16%. Replacing one out of six glass pieces because of shipping damage was obviously unacceptable for both Z-Line and the shipper.

“We went through a long process of trying to figure out why, all of a sudden, we were having so much breakage,” says Robinson, who at first thought the shipping company was handling the packages too roughly. When that turned out not to be the case, he put on his detective hat and began to dig deeper into the problem.

“What we finally came up with was that our products had been getting bigger over the years,” he explains. Z-Line entertainment centers and TV stands—and the accompanying glass panels and tops—had gradually grown to accommodate typical TV sizes that had gone from 42-in. screens to 65 in.

“At the same time, we also wanted to get away from EPS and go with something more environmentally friendly and cost-effective,” says Robinson. “We were paying to dump a 40-yard dumpster of scrap EPS every two and a half months in the landfill, and the cost of EPS disposal was going through the roof.” Customers ordering replacement glass panels were also getting more environmentally conscious and increasingly vexed by the disposal challenges and mess of EPS foam, he adds.

Working with Landsberg representative Kendra Danneil and Landsberg designer Tom Smurthwaite, Robinson switched to a pack that sandwiched the glass between sheets of honeycomb, cut two inches larger than the panels to provide a buffer zone inside the corrugated box. The honeycomb was strapped to prevent slippage.

“But we still weren’t passing the drop test, and we couldn’t understand why,” says Robinson. “When we got up to drops number nine and 10, that’s when we started to get our breakage. The honeycomb was doing its job, protecting the glass from the impact. We assumed the glass was shifting in the package, and that’s what was causing the breakage.” It took another six months to uncover and fix the real source of the problem.

In videotapes of its in-house drop testing, Robinson noticed that on the flat drops—drops nine and 10—the box actually bent when the two ends weren’t released at exactly the same time. Glass has a flex radius, but the replacement glass was breaking instead of flexing during the flat drops.

The culprit turned out to be the small circular cylinders that are glued to the glass to act as buffers and also keep it from sliding on the table or stand tops.

“What we finally figured out was that where those cylinders are attached to the glass, the glass couldn’t flex,” he says. “That’s where the breakage was happening during the flat drops. So, I had to come up with some way to make the package rigid so it couldn’t bend but it could still withstand impacts.”

“That glass pack had been an issue for years,” says Danneil. “The glass panels were all different sizes, which made it quite challenging to find a custom solution.”

When Robinson noticed Lamination’s VBoard corner and edge protector product on a pallet of Laminations product being delivered from Landsberg, the solution started to take shape.

“What if I took two of the VBoards, locked them together on the edge, and shipped using that?” Robinson asked Danneil. That’s when Danneil suggested UChannel, another Laminations VBoard-type product, as an option.

UChannel is laminated three-sided paperboard manufactured with a single-piece seamless construction. It can be formed to provide a range of base widths and leg lengths, including asymmetrical combinations that allow for unique applications. Like VBoard, UChannel is 100% recyclable. With assistance from Laminations account manager Chris Wingenroth, Z-Line and Landsberg developed a customized package that uses UChannel, 1-in. honeycomb and corrugate. The UChannel used by Z-Line comes in 60-in. lengths and has a base width of 2.375 in., leg lengths of 1.8125 in., and a caliper of 0.160 in.

The glass panels are sandwiched between two pieces of honeycomb and slipped inside the protective UChannel pieces. Strapping holds everything snugly together. UChannel is also cut into smaller pieces that are taped back-to-back with the edge protection to provide a required buffer zone inside the corrugated dbox.

Landsberg further customized the packaging by developing a corrugated box design with die-cuts that allow the box to be expanded or contracted to accommodate all the different sizes of glass-panel packages with one of two corrugated pieces. “So now it doesn’t matter what size glass we are shipping. We can make the box fit,” says Robinson.

Z-Line then put the new packaging combination through months of rigorous in-house testing. “We dropped one piece of glass 50 times before it actually broke,” says Robinson. “When we sent the new package off to test labs of the shipping company, it came back with flying colors.”

Since September 2011, Z-Line has had a total of seven claims for glass breakage. All of those seven claims came during a brief, two-week period when Z-Line was using what turned out to be an inferior honeycomb from an alternate source. The company switched back as quickly as possible.

Using honeycomb, corrugated, and UChannel through Landsberg, the breakage rate has plummeted from a high of 16% in February 2011 to zero. “It’s been nice to finally find a bullet-proof solution,” says Danneil.

Adds Robinson, “On top of the nearly 10 dollar per-shipment savings by using UChannel instead of EPS, we’re saving money in manpower, taking only 40 minutes rather than an hour to package the glass. Plus, we don’t have to pay to dispose of the EPS, and we’re even getting paid to recycle the scrap pieces of honeycomb.

“Although the cost to ship is slightly increased because the packaging is a little heavier, our overall savings have been more than 10 percent. It’s become a wonderful fit for us.”