This three-dimensional diagram shows how honeycomb dunnage helps secure rolls of brown paper used by corrugators. In the diagra

For years Pactiv's mills used a combination of wood and steel to brace and stabilize rolls of brown kraft paper inside railcars during shipment to corrugated boxmaker customers. During transport, the wood and steel often damaged the paper rolls, which are used as both linerboard and medium in making corrugated board. Also troublesome were the injuries occasionally suffered by mill workers who handled the wood and steel braces, some of which weighed up to 90 lbs. The plants, too, disliked wood and steel because they presented disposal headaches. So, in November '96, Pactiv's Tomahawk, WI, plant began using Hexacomb®, from Pactiv Inc./Hexacomb (Lincolnshire, IL). By switching to this recyclable, lightweight kraft paper honeycomb railcar roll securement system, lost worker time due to injuries is nearly eliminated, and customers no longer need to pay for discarding or landfilling wood and steel. Perhaps most important, product damage is greatly reduced. "In the containerboard business, we make and sell packaging to contain and protect our customers' products, but sometimes fail to protect our own," says Jerry Lowe, Pactiv Inc. vice president and general manager, containerboard. "With rail shipments we 'walked barefoot' using little or no protection, accepting damage and higher costs." That's no longer true. Last year, Pactiv's mills in Valdosta, GA, Counce, TN, and Filer City, MI, also converted to Hexacomb. Combined, the four plants ship more than 26ꯠ railcars worth of brown paper rolls annually, to both Pactiv and competitive corrugating facilities. Typically, each railcar measures 50' 6" L x 9' 6" W x 10' H. Within each car, brown paper rolls are positioned in a 2x10 configuration. Rolls are positioned slightly offset from one another, rather than side by side. This makes it easier for dock workers to unload them. Rolls may be stacked one, two or three high in the car. The combination of cylindrical rolls inside a rectangular railcar leaves voids that must be filled by protective cushioning to prevent roll damage during shipment. That's where the Hexacomb comes in. The roll securement system includes three primary components: Cushion Comb(TM) roll spacers, void fillers, and roll riser blocks and pads. The components are carefully positioned (see diagram) to effectively break up each railcar into four sections to better absorb the rigors of rail transit. Additionally, a long, rectangular honeycomb piece is sometimes placed on a diagonal to protect rolls located beside the rail door from damage when dock workers open the door. On opposing diagonal corners in the railcar, mill workers place a 24" W x 72" H x 3" deep roll spacer. Using one at each corner helps brace paper rolls at the front and the back of each car. Two roll riser blocks are positioned beneath the third roll in both rows. This third roll is an equal distance from both the center and the front of the railcar, and from the center and the back end of the car. Measuring 6" W x 48" L x 6" H, these risers help to more evenly divide vibration or shock among the paper rolls during transit. Roll pads may be placed under every roll to prevent damage at the roll bottoms when rolls are taken off the railcar. Cushioning in the center of the car is especially important as these rolls are subject to the most pressure during transit. That's according to Terry Olson, sales manager for Pactiv/Hexacomb's paper mill group. To help protect these rolls, mill workers place void filler air bags between the two center-most rolls in both rows. Supplied by different vendors, these bags are made of an inner plastic bladder, usually with an eight-ply kraft liner and polyethylene outer coating for moisture resistance. On both sides of these 48"-wide bags a Cushion-Comb roll spacer is placed for added support. The combination of all these Hexacomb components divides the load into quarters. Their use has made a difference. Pactiv's Tomahawk plant is a good example. "All our costs for the mill are calculated on a per-ton basis [of brown paper that is shipped to customers]," explains Kirk Kind, who served as the plant's customer service and shipping superintendent until joining the company's Hexacomb Division recently. "The Hexacomb costs us about ten cents more per ton than the materials we had used before," he admits. "But there are several advantages to using it. First, our returned goods due to damage are down by 75 percent. That makes our customers happy. And when we had used wood to help block railcar loads, if anything was going to give, it was always the paper that lost the battle." Hexacomb's Olson says that there are savings from reducing additional "hidden" costs associated with returned goods. For every $1 lost to damage, he claims there is another $6 paid out for expenses such as administrative costs to file and handle claims, additional transit costs to replace the damaged paper, customer complaints and lost productivity. Kind tells PW that accidents due to injuries handling wood are also down considerably. While he wouldn't reveal specifics, he indicates that the Hexacomb system has virtually eliminated back injuries and splinters. He says, "It's truly a worker-friendly system, and if we were to go back to using wood, there'd be mutiny out there." 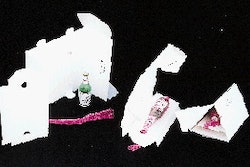 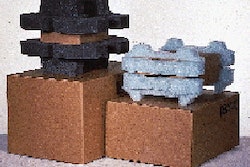 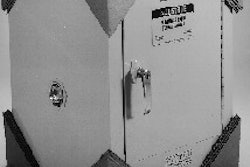