At the AIPIA World Congress, Mars Wrigley and WestRock detail a pilot that used digital printing and Augmented Reality for a collectible, connected M&M’S pack in Green Bay, WI. 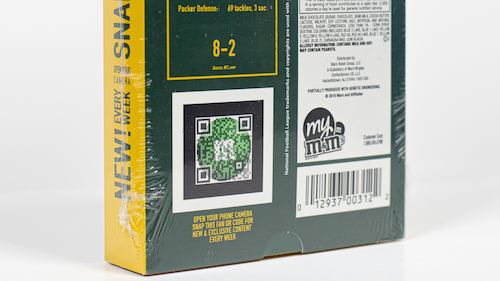 Each carton included stats on the most recent game and the Packers’ record that week within the division. It also used AR technology to allow consumers to collect stickers and take selfies with their favorite M&M’S characters, as well as unlock exclusive content. 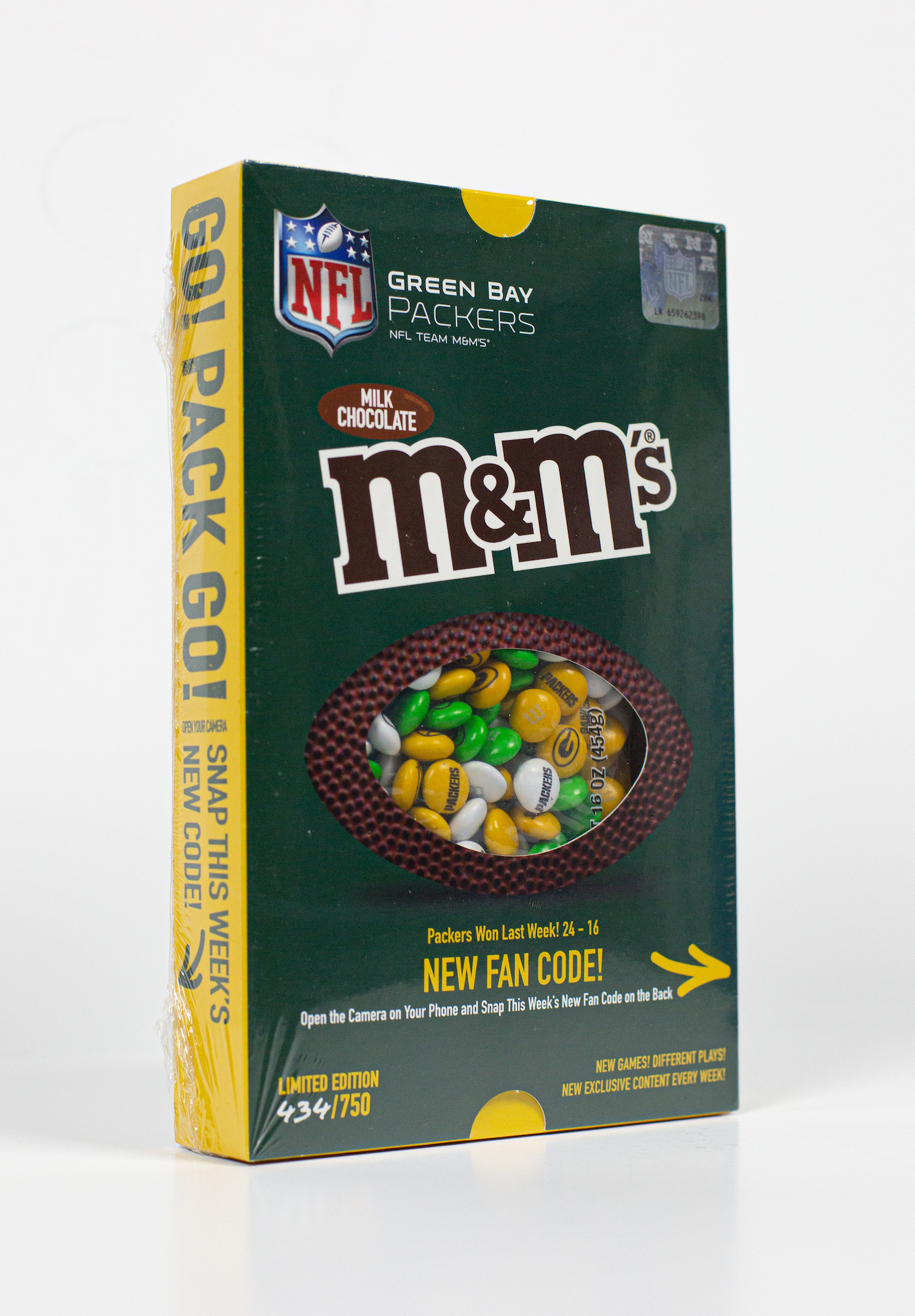 Each week of the NFL season, a new limited-edition box made its way to Green Bay stores.For the 2019 NFL season, licensee Mars Wrigley piloted an innovative project using smart technology-connected, digitally-printed packaging to get more bang for its licensing buck while providing consumers with personalized experiences. In terms of price point and product velocity, the results were “astonishing,” according to John Dwyer, Vice President of Business Development for WestRock, the packaging supplier that spearheaded the project.

At the AIPIA (Active & Intelligent Packaging Industry Association) World Congress, held in Amsterdam in November 2019, Dwyer, along with WestRock colleagues Erin Allen, Innovation Integrator, and Carol Hammond, VP Innovations Europe, as well as Flint Eckstein, Mars Global Packaging Innovation Manager, took to the conference stage to share the story of Mars Wrigley’s M&M’S Green Bay Packers NFL promotion, which at the time of the event, was scheduled to run through Dec. 29.

WestRock is primarily a supplier of conventional paperboard-based packaging. But in 2017, it moved beyond material science, establishing its Connected Packaging Solutions offerings to bring real-time intelligent interactivity to packaging, displays, and signage. The program relies on collaboration with a number of smart technology providers, such as Digimarc,  with its digital watermarking technology, and IoT platform providers EVRYTHNG and Talkin’ Things, among others.

“Our focus is really deploying at scale,” said Dwyer. “In our industry, the technology needs to be wide-scaled and open-sourced. Our goal is to work with all of our partners to understand what the technology addresses and what the specific challenges are, and create an ROI around that. Nobody makes money running pilots. We want to help solve problems within a supply chain. How do we make things more efficient? How do we reduce waste? How do we make consumers more accepting of products?”

At Mars Wrigley, Eckstein is part of a dedicated new team tasked with “scanning and scouting” new technologies to address market opportunities. After gathering information from suppliers, regional counterparts, and consumer insight agencies, Eckstein’s team identified five buckets. One big one, he said, is personalization.

“It has almost become a little cliché, but consumers are looking for experiences,” he said. “Nowadays, we already have the high-quality product out there. We already have well-known brands, so we don’t necessarily have to work on that part of our business anymore. It’s now about creating experiences with the brands we have, finding the relevance for these products and consumers.

“In general, we see that consumers are more willing to pay extra if the value proposition is right, with new products or new experiences from a product.”

In a unique twist though, it was not a packaging, nor a marketing person that triggered the M&M’S connected packaging pilot; it was a Mars Wrigley business person interested in learning how the company’s investment in the 2019 NFL season could be better put to use.

“Like many National Football League sponsors, Mars spends a lot of money for a license,” explained Dwyer. “The football season is very long—in the U.S., it’s 17 weeks minus the playoffs. And what typically happens if you’re an NFL sponsor is that you spend a lot of money to put a licensing bug on the packaging, and then you spend a lot more money on commercials, typically around the Super Bowl. So you’ve got millions and millions of dollars invested in this licensing process. The folks at Mars were willing to step out and do something really unique to see if they could leverage that and make it a better payoff for their packaging.”

The pilot targeted Green Bay, WI, and its beloved NFL team, the Green Bay Packers, and comprised POP displays and custom-printed, 16-oz. cartons—one for each week of the season—that included stats on the most recent game and the Packers’ record that week within the division. It also used Augmented Reality technology from Pixel and Texel to allow consumers to collect stickers and take selfies with their favorite M&M’S characters, as well as unlock exclusive content each week, just by using their smartphone camera.

“What’s different about this is that when consumers go to the store, they see something that is fresh, and it is unique on a weekly basis,” said Dwyer. “The results quite frankly are astonishing. The price point is significantly higher [$10 for a 16-oz pack], and the velocity is significantly higher in terms of the way the product moved.”

The customized packaging also drove some unexpected behavior. To create an air of collectability around the cartons, each one was numbered. Because of this, fans began rifling through the in-store POP displays to find the lower numbers that corresponded to their favorite Green Bay Packers’ players. “They are literally going store to store to store, moving packages, replacing packages, to find specific boxes,” Dwyer shared.

Another learning is that while the product was $10 on-shelf, consumers are reselling them for up to $50 on sites like eBay. “That tells us that there’s a real e-commerce play here,” added Dwyer.

The success of the limited-edition, customized packages was reliant on a number of parties, including Mars, the creative agency that manages the M&M’S licensed characters, Pixel and Texel, WestRock, and a Chicago-based co-packer. As Dwyer explained, after the NFL game ended on a Sunday night, WestRock used an automated system to update the game stats and send them to its Michigan converting facility. By 3 a.m., the company would begin printing the paperboard cartons using HP Indigo digital printing technology, then die-cut, fold, and glue the packages. The cartons were then shipped by truck to Chicago, where a co-packer would fill them with custom-colored green, yellow, and white M&M’S. They were then transported to Green Bay. By Tuesday morning, the product was available in area stores. Said Dwyer, “It literally took a village to make this happen.

“You think about two multibillion-dollar organizations [WestRock and Mars Wrigley] along with local organizations dancing nimbly to get something like this done—that was maybe the most amazing thing of all about this project. But Mars was willing to take a risk and try something completely new.

“What I like about this is that it’s technology that is scalable, it’s deployable, it’s ROI-oriented. We’re actually getting a measurement around what the consumers are doing, and we think that’s really an incredible story to tell. We’re hopeful that in the coming weeks we’ll find out that this is being scaled much bigger within the U.S. There are also aspirations for college sports.”

One method to increase the perceived value of your product is to reduce visual pieces of information, or chunks, on your package.
Dr. R. Andrew Hurley
Mar 13th, 2020

The Manufacturing Institute announced that it will award Meena Banasiak a Women in Manufacturing STEP Ahead Award on April 30 in Washington, D.C.
Phoenix Inc.
Mar 9th, 2020

The J.M. Smuckers Co. designs a limited-edition jar for its peanut butter with its JIF logo transformed to GIF and a social media hashtag to spur consumers to join the debate.
Anne Marie Mohan
Mar 4th, 2020

Würth IT Partners With NiceLabel to Transform Supplier Labeling

A recurring theme when it comes to packaging of cannabis is the transition from having an army of people in manual mode to an operation where automated or semi-automated systems reduce the amount of packaging that’s done by hand.
Pat Reynolds
Feb 3rd, 2020

Should these packaging visions come to pass, packagers and their packaging technology vender/partners will continue to find efficient, sustainable ways to identify, protect, and distribute products to their consumer and industrial customers.
Ben Miyares
Feb 3rd, 2020

Packaging is the Vehicle in Dogwalkers’ Brand Journey

Cannabis brand gets a full redesign that results in a discreet, convenient packaging system with a distinguished, time-tested feel. It uniquely uses color to communicate not only to consumers, but also to stakeholders throughout the value chain.
Matt Reynolds
Jan 28th, 2020

Progressive disclosure of information about a product through on-pack labels and instructions contained within the packaging enhances the consumer’s experience one action at a time.
Dr. R. Andrew Hurley, PhD
Jan 20th, 2020

Colgate-Palmolive’s breakthrough toothpaste tube, on pace to be fully rolled out by 2025, is certified as recyclable by the Association of Plastic Recyclers (APR).
Matt Reynolds
Jan 7th, 2020

The Evolution of Digital Inkjet Labels

Variable data and personalization are just the tip of the digital print iceberg, as new developments alter purchasing, production and supply chain in the market.
Kim Overstreet
Jan 6th, 2020

Authenticity, honesty, and technology stand out as the drivers of the next two years’ color trends, but how they are interpreted into color are vastly different.
Anne Marie Mohan
Dec 27th, 2019

(Hint: It's not the same as vegan.) With plant-based alternative foods outpacing total food sales by over five times, brands needed a meaningful definition of the term plant-based that shoppers could quickly identify.
Keren Sookne
Dec 19th, 2019

A four-pack sampler of vegan skincare masks is conceptualized as a mixtape, with packaging that looks like a '90s cassette—but with a modern twist.
Anne Marie Mohan
Dec 21st, 2019