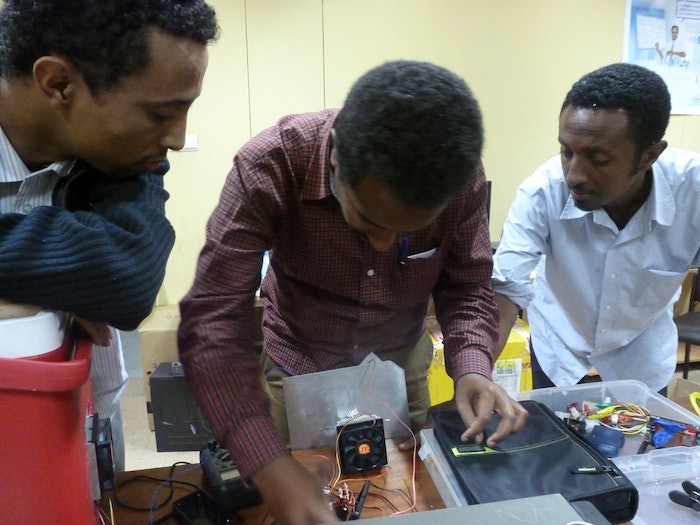 Tuberculosis, now largely controlled in the industrialized world, remains a stubbornly persistent killer in most of Africa, as well as parts of Asia and South America. The spread of multidrug-resistant strains of TB has slowed progress against the devastating disease, which is estimated to strike more than 10 million people annually.

But a modified soft-drink cooler, developed by researchers at MIT’s D-Lab, could make a dent in the disease’s impact. There are two key issues that physicians confront in trying to tackle drug-resistant TB strains in developing countries.

The first is that the drugs used to treat the disease, which require several daily doses during a course of 18 months, must be kept at a controlled low temperature—in places where the availability of electricity is sparse and unreliable.

Second, the drugs must be taken regularly, which requires continuous monitoring by healthcare workers. Both issues could potentially be addressed by the cooler developed by researchers in the Little Devices Lab, a team of researchers within D-Lab who work to develop low-cost solutions to pressing medical needs.

D-Lab is a program of classes, workshops and labs at MIT, launched a decade ago by senior lecturer Amy Smith. The program now includes 13 classes on topics in health, mobility and energy, and is devoted to developing solutions to problems facing low-income people and communities around the world.

José Gómez-Márquez, the D-Lab instructor who runs the Little Devices group, says the team’s breadbox-sized cooler was adapted from one designed to keep soft drinks cool. Dubbed “CoolComply,” it can run on either plug-in power or solar cells, and contains circuitry to monitor the temperature inside and transmit an alarm if it rises too high. (Higher temperatures cause a gas to be released inside the medicine packets, which can make patients ill.)

To track compliance, each cooler records the exact date and time when the box is opened, which allows a single-dose packet to be dispensed. A built-in cellphone transmitter sends information on temperature and cooler activity to a central health facility where the data can be stored and monitored.

The CoolComply team won a $100,000 award last fall as a Vodaphone Americas Foundation Wireless Innovation Project, as well as a $50,000 grant from the Harvard Catalyst. The awards will see the project through initial development and testing.

The idea originated with Kristian Olson and Aya Caldwell, physicians at Massachusetts General Hospital in Boston, who told Gómez-Márquez about the pressing need to keep TB medicines cool and to verify patient compliance with the dosage regime.

Since many of the patients entering treatment lack access to refrigerators, they are instead provided with coolers requiring daily deliveries of ice; their compliance with the dosage regime is checked regularly by visiting health workers. Those constraints severely limit the number of patients who can be treated, Gómez-Márquez says.

The daily ice deliveries cost $600 annually, about double the cost of the CoolComply system. Also, he says, “Ice doesn’t send you a message” to show that medicine has been taken.

Since last September, three prototype devices have undergone field-testing in Addis Ababa, Ethiopia; this summer the D-Lab team hopes to deploy at least 10 more there for further testing. Ultimately, the team hopes the devices can be produced locally and distributed by a small for-profit company set up for this purpose, fostering both better health and the creation of local jobs.

The wireless reporting system in the CoolComply device “solves the problem of having to visit the patient every day,” Gómez-Márquez says. But getting to that point wasn’t easy: The first prototypes built last summer by the team, which also includes D-Lab instructors Anna Young and Amit Ghandi, worked perfectly in the U.S., but as soon as they arrived in Addis Ababa for field testing, “none of it worked,” Gómez-Márquez says.

That was because of unreliable signals from the local cellphone system. “We had to go back to the drawing board,” he says. “We were in despair.”  One problem, Ghandi says, was the design of the cooler’s antenna. “You couldn’t tell what was wrong by looking at it,” he says, “but it wouldn’t work in certain parts of Ethiopia.” Finally, after switching to a different type of antenna and devising some tricks to make up for unexpected gaps in the system (such as the lack of a built-in timestamp on Ethiopian text messages), they were able to get a reliable device up and running.

That’s par for the course for such projects, Gómez-Márquez says. “You want, during the first trip, for a lot of things to go wrong,” he says. “That’s why you go over there.”

A key aspect for this project was enlisting local users to try out a new system under real-world conditions. “We found amazing engineers” at the Addis Ababa Institute of Technology, he says, who “did an enormous amount of work” to help get the system working.

These local engineers, in fact, were delighted to have the chance to work on such a project, which they could see was something that could be built and maintained within the country.

A recent federal court decision gave a big boost to the FDA’s Generally Recognized As Safe (GRAS) rules. As with last month’s column, this one will examine this single case for its unique lessons.
Eric Greenberg
Oct 25th, 2021
More in Package Design