Both glass and polymer-based syringes expected to make gains, according to a new report that cites biologics and injectables as factors in the growth of prefilled devices. 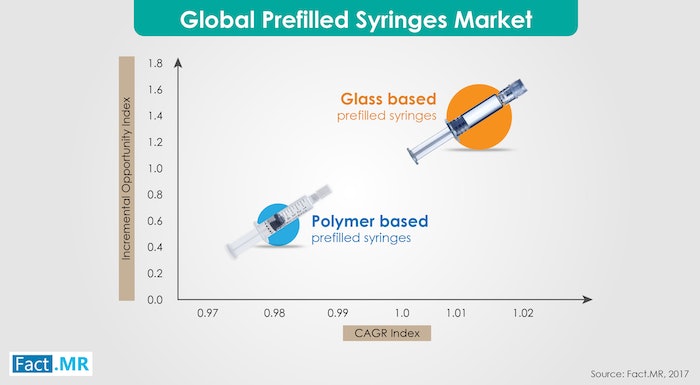 Convenient, effective administration of biologic-based and sometimes novel therapies for personalized medicine are helping to take the pharmaceutical industry to a new level, according to a new Fact.MR prefilled syringe market forecast.

The study, which evaluates and forecasts the prefilled syringe market from 2017-2026, says these delivery devices are becoming increasing popular because of their ease of use and enhanced safety. With that in mind, the study forecasts “an impressive 9.1% CAGR between 2017 and 2026 to clock a value of $11 Billion by the end of 2026.”

Fact.MR says manufacturers are developing more evolved versions of prefilled syringes. “A case in point,” says the report, “is the PosiFlush developed by Becton Dickinson, which contains 4% sodium citrate lock solution that can reduce the number of catheters for hemodialysis by about 59%, thus minimizing risks. Innovations such as these are constantly reshaping the contours of the prefilled syringes market.”

Key insights from the report include the following:

• At present, prefilled syringes made of glass accounts for the highest market revenue, sales expected to top $ 7.5 Billion by end of 2026. However, “their fragility has crimped their uptake to an extent. It has also egged manufacturers in the prefilled syringes market to come up with polymer-based versions of the product that do not break easily or react with the drug they carry.”

• Hospitals are the most prominent distribution channel in the prefilled syringes market, with sales of both glass and polymer-based products estimated to reach a value of over $6.5 Billion by the end of 2026. Other distribution channels, such as online pharmacies and specialty clinics, are also expected to gain traction in the prefilled syringes market in the years ahead.