Makers of Hunt’s and Heinz ketchup hope consumers will flip for new ketchup offerings that stand on their closures.

Makers of Hunt’s and Heinz ketchup hope consumers will flip for new ketchup offerings that stand on their closures, allowing easy squeezing and dispensing of the condiment. While upside-down ketchup bottles are not uncommon in Europe, their July introductions in the United States are newsworthy.

Pittsburgh-based Heinz North America’s Heinz Easy Squeeze sells in an ergonomically designed PET bottle supplied by Owens-Illinois (Toledo, OH). Seaquist Closures (Mukwonogo, WI) provides the stay-clean closure. The “shield” label looks identical to that of the company’s upright ketchup bottles, save for a banner that reads, “Easy Squeeze! Stay Clean Cap with Squeeze Control.” The 20- and 32-oz size bottles are filled by Heinz at its Freemont, OH, plant, says Robin Teets, Heinz’s senior manager of communications. Teets adds, “in our testing with consumer focus groups, the bottle earned the highest approval score for ketchup in the history of Heinz. Consumers also had an overwhelmingly positive reaction to the clear PET bottle. With this bottle,” he adds, “there’s no need to shake it, there’s no messy residue on the cap, and it minimizes the runny liquid” that sometimes discharges from upright bottles.

Decoration comes from a 2-mil oriented polystyrene label printed gravure in seven colors by American Fuji Seal (Bardstown, KY). It’s “bottomed” with a “no drip spout” closure, again from Seaquist Closures. The package will reach supermarkets and select mass merchandisers, including Wal-Mart, this summer. Its suggested retail price is $1.99. “For years consumers have been frustrated with getting ketchup out of the upright bottle,” says Crowley. “With water-bonded foods like ketchup, over time, the water separates from the solids due to the headspace area.” This “snyneresis,” as Crowley calls it, “causes the watery mess you sometimes get. But with an inverted bottle, there’s no headspace, so you dispense the ketchup where you want it, and when you want it.” —JB 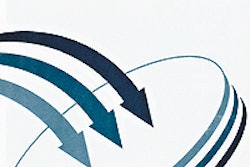 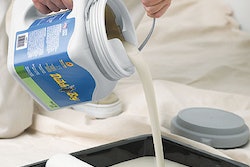 Everything but the brush!