Phoenix-based Shamrock Foods Co. has filed a "declaratory judgment action" in federal court in Phoenix, AZ. It seeks a ruling that the packaging for its Shamrock Farms "mmmmilk(TM)" single-serve milk products does not violate any trademark or trade dress rights that Dean Foods Co. 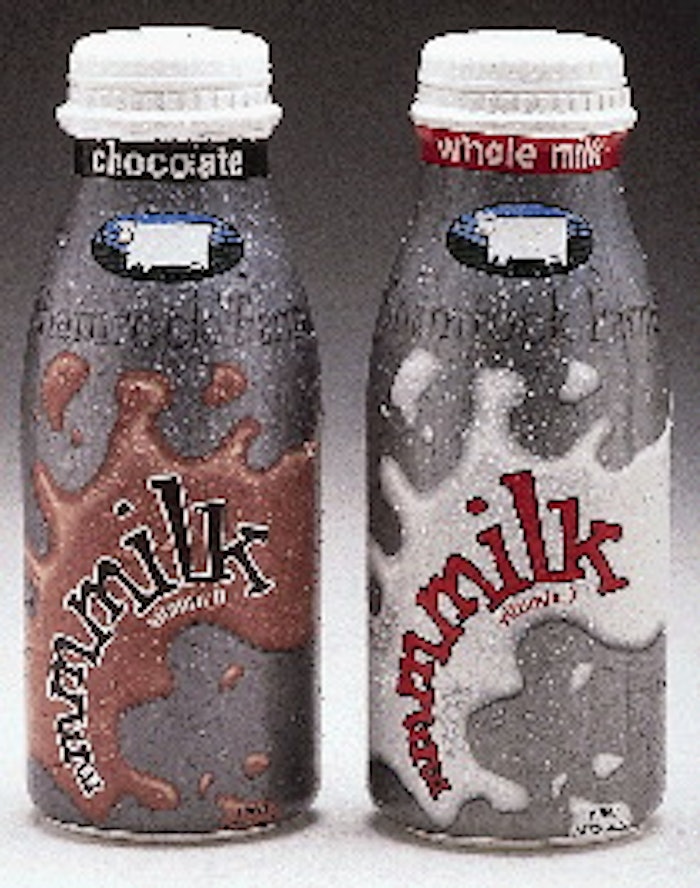 claims to possess for its "Milk Chug" single-serve milks. Shamrock and Franklin Park, IL-based Dean are among several dairy companies that have begun marketing single-serve containers of milk products in wide-mouth plastic bottles reminiscent of the glass milk bottles used for home delivery of milk, primarily through the 1970s (see Packaging World, November '97, p. 54). The single-serve containers from both Dean and Shamrock are extrusion-blown high-density polyethylene with shrink sleeve labels that carry the graphics. The containers have reclosable caps and are designed to fit into automobile cup holders and bike clips, offering on-the-go consumers a convenient and practical alternative to the paper milk carton. Dean Foods has publicly asserted that its trade dress gives it the exclusive right to market its single-serve milk products in plastic bottles simulating old-fashioned glass milk bottles. In trade advertisements and direct communications it claims to be the first to use such a shape for single-serve containers. Shamrock disputes this claim. "We began using milk bottles when we entered the dairy business in 1922," says Shamrock chairman Norman McClelland. "Now Dean is claiming they have the exclusive right to this bottle shape. We certainly do not accept the proposition that our use of bottles having the shape we've used over the past 75 years can somehow constitute a violation of Dean's rights or anyone else's." Shamrock alleges in its lawsuit that Dean has threatened it with litigation if Shamrock continues to market its milk products in such bottles. Shamrock seeks a court ruling that Dean's trade-dress claims are not valid. Dean's Dale Kleber, assistant general counsel, says he's confident that Dean will succeed in protecting its proprietary design, noting that a trademark has been applied for. "Dean Foods pioneered this shape in plastic," Kleber tells PW. "Granted, we haven't spent a hundred years and hundreds of millions of dollars like Coca-Cola has in developing and protecting this package. But we have spent $50 million, and we do not take kindly to someone trying to pass their product off as ours."