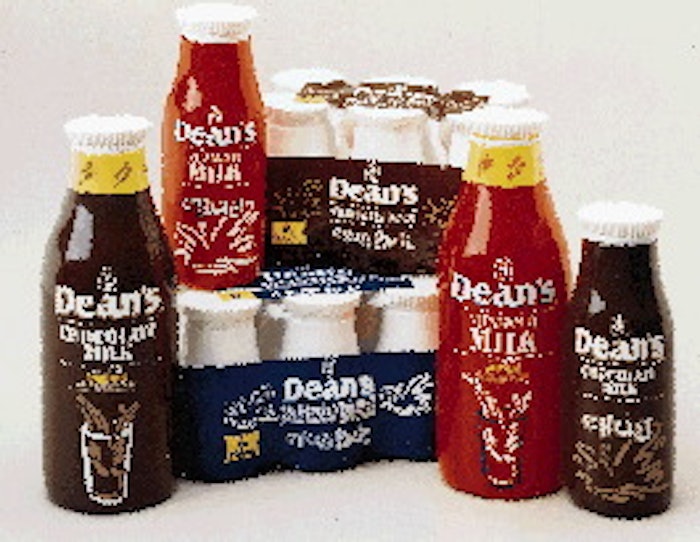 The 8-oz bottles are sold in a shrink-wrapped six-pack, while the two larger sizes are sold individually. Decorating is a colorful full-body shrink label. All three sizes will be displayed in the refrigerated milk case. Dean Foods will fill the white-pigmented bottles at several regional dairies where it markets milk. "Bottles will be made by various companies where it makes sense for us geographically," says Sylvia Oriatti, director of marketing for Dean's Dairy Div. Reportedly, the company is investing some $40 million to equip its dairies to fill the new packages, which she says are replacing paperboard gabletops. "The contemporary bottle design will open up a world of new uses and enhance Dean's ability to compete as a beverage outside of traditional dairy offerings. Milk Chugs offer consumers a new way to drink milk and think about milk-as a convenient, year-round alternative to other beverages," says Jim Page, vp of marketing. Besides the nostalgic, yet contemporary, bottle shape, Milk Chugs feature a threaded white flared cap. Oriatti says the quart has a 43-mm neck finish, while the two smaller sizes are 32 mm, "like other chuggable beverages," she adds. Milk Chugs were introduced in September to major Florida markets under Dean's T.G. Lee and McArthur divisions. This month, Milk Chugs will roll out in Chicago and other midwestern cities. Two other regions are scheduled to receive product next year. Suggested retail price is $2.79 for the six-pack, $1.29 for 32-oz and 89¢ for the pint.