Research shows a significant degree of consumer dissatisfaction in using Super Glue can be traced to packaging, says Loctite Corp., manufacturer of Super Glue and other adhesives. 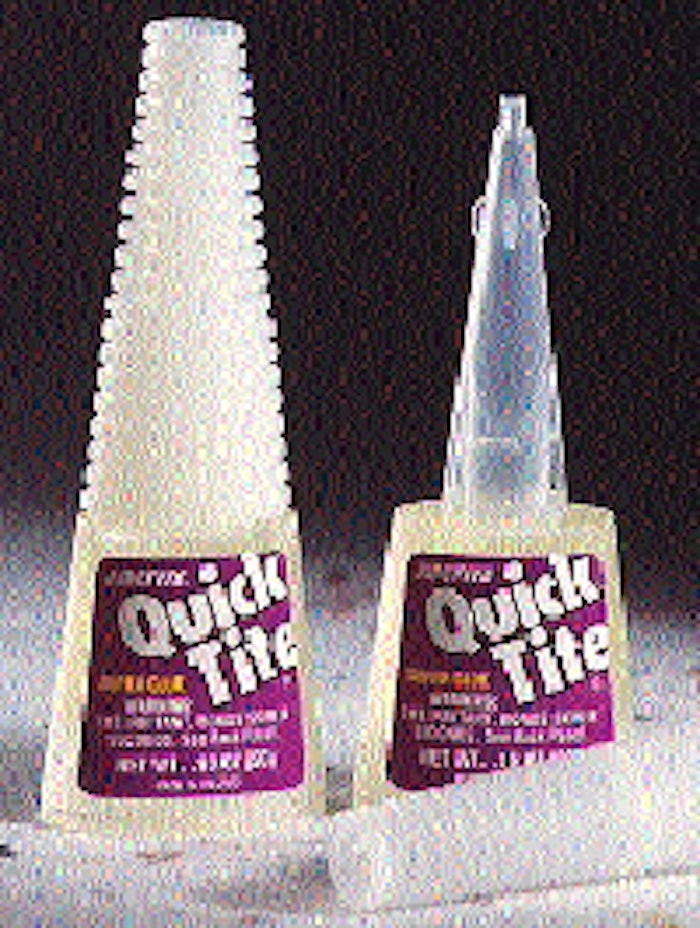 In response, the Cleveland-based company began work on an alternative for the traditional aluminum tube in hopes of solving this sticky situation. "We're trying to establish a package that not only has a world class adhesive but a world class dispensing system," says Tom McNicholas, vp of marketing for consumer products at Loctite. Enter Quick Tite, a patented new Super Glue package that adheres to this pledge. Produced by Afa-Polytek (Helmond, The Netherlands), the injection-molded polypropylene container consists of four parts. A one-piece bottle was ergonomically designed with a long nozzle to access hard-to-reach areas while keeping glue away from fingers. On top sits the cap, which contains a stainless steel pin, inserted at the molding stage. This pin seals the nozzle orifice and prevents leaking. Caps and bottles are assembled and shipped to Loctite's Ireland plant where they are bottom-filled. The fourth component, a threaded friction-fit plug, is inserted into the base after filling and is the sole means of sealing the package. Front and back pressure-sensitive labels boast the Quick Tite name. Graphics were handled with help from Gerstman+Meyers (New York, NY). Introduced last year, Quick Tite is sold alongside Super Glue in traditional tubes. Retail price varies from about $1.99 to $2.49.